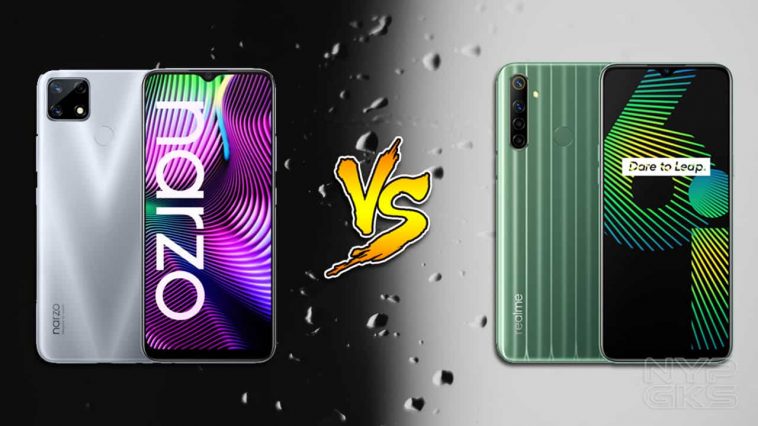 Recent research reveals that Realme is the biggest smartphone brand in the Philippines in terms of smartphone shipments. That’s not surprising considering all their budget phones provide a great value for the Filipinos.

Recently, the company brought the Realme Narzo 20 into the country. It gained a lot of attention after its release as it has a couple of killer specs for under Php8,000.

Being the most popular category in the market, it’s no surprise that Narzo 20 has tons of competition around.

What’s odd is, it also goes head-to-head with its own brother, the Realme 6i, which has the same price of Php7,990 and also offers a couple of bang-for-the-buck features.

So the question is, which between these two smartphones should you actually get? We find out in our Realme Narzo 20 versus Realme 6i specifications and features comparison.

Don’t expect to get the best-looking smartphone if your budget is limited. However, the company did its best to make the Realme 6i and Narzo 20 look as good as possible.

The Realme 6i features a design that looks like a group of Bamboo trees standing up. It was actually co-designed by a Japanese industrial designer, and it looks pretty unique in person.

Personally, the Realme Narzo 20 looks a lot cleaner. It has a more subtle V design that reacts to light, creating a clean but distinctive look.

Both devices are primarily built with plastic, with glass on the front with a pre-applied screen protector. But due to their large batteries, they are relatively thick and quite heavy.

The screens on both handsets are pretty much the same. The Narzo 20 and Realme 6i come with 6.5-inch screens. But, with only an HD+ resolution, so don’t expect the sharpest quality out of them. On the upside, their IPS panels do provide decent colors and brightness.

They also come with single loudspeakers, decent for private listening. For a better listening experience, they have earphone jacks on the bottom for you to plug a pair of cans on, but you have to purchase it separately.

This is where their key differences lie. Being the newer model, the Realme Narzo 20 features a more powerful MediaTek Helio G85 octa-core processor, while the 6i settles for an Helio G80 chip.

And for the same starting price of Php7,990, the Narzo 20 already has 4GB of RAM, while the latter settles for 3GB. You have to spend more to have 4GB on the Realme 6i. But as a bonus, you do get twice the storage capacity.

Although, you can easily expand the storage on the cheaper Narzo 20 by adding a microSD card. It’s the RAM that you can’t address later.

Both the Narzo 20 and Realme 6i comes with similar cameras on the back. They share the same 48-megapixel main shooters, 8-megapixel ultra-wide, and 2-megapixel macro.

However, the Realme 6i takes the lead with its sharper 16-megapixel selfie camera and a dedicated depth sensor.

Having a depth sensor is not a big deal, since the Narzo 20 can use the other two cameras to analyze depth. But if taking sharp selfies is really what you’re after, then the Realme 6i can actually be a better option.

Realme rigged them with 18W fast charging to complement their large batteries. Plus, reverse charging via OTG, allowing these devices to act as a power bank to charge other devices.

Well, I guess we have a clear winner here. It may have a marginally inferior camera, but the Realme Narzo 20 does have a much better processor and a larger battery — the key components that you should cover if you’re buying an affordable smartphone.

What’s more interesting is, they both phones have a similar price tag. The Narzo 20 is only available in a single 4GB/64GB storage for Php7,990. For the same price, the Realme 6i only comes with 3GB of storage. It does have a 4GB/128GB option, but you have to spend Php2,000 for that.

Either way, both the Narzo 20 and Realme 6i are now available in the Philippines. The former is initially available in Lazada exclusively, while the latter 6i is already in tons of online and offline stores.