According to Security Research Labs (SRL), a Berlin-based hacking research collective, Android has been the most successful operating system to date. In this case, most of the users keep their devices’ privacy and security by providing regular patches.

However, SRL revealed in their recent study that though most of the mobile device manufacturers claim that their software is catching up with updates, many are still missing one or more security patches, leaving parts of the mobile device’s ecosystem exposed to some risks.

A patch is a piece of software intended to update programs, whether fix it or improve it. This patch is in charge of fixing vulnerabilities and bugs so mobile devices can perform in its optimum level.

In the report, Security Research Labs exposed that among all Android vendors, Pixel by Google is the best while the Asian giants – Samsung and Sony are not far behind, having 0 to 1 security patches missing. 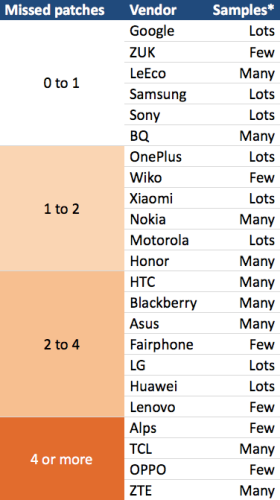 On the other hand, numbers kept on getting high when the hacking research collective looked over the hardware from LG, ASUS, OPPO, and ZTE – averaging to 2 or more missing patches.

Yet, Security Research Labs researchers noted that not all patch tests are always convincing, so the real numbers can be higher and phones included in the tests were those patched from October 2017 or later. SRL also clarified that a missing patch does not automatically indicate that a related vulnerability can be exposed.