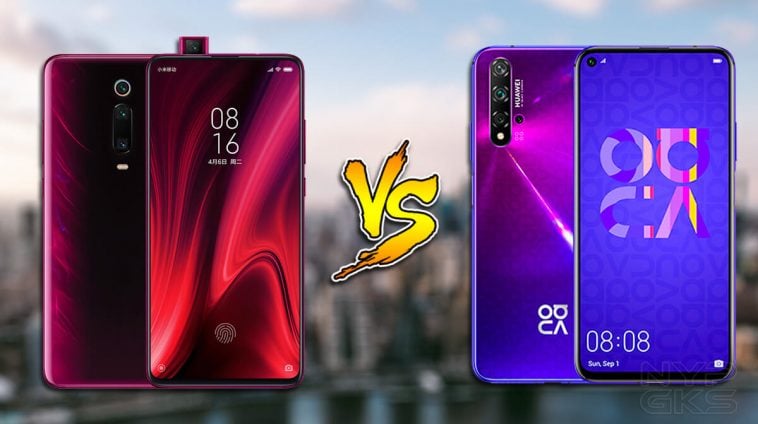 It feels like smartphone brands are giving us more reason to disregard their flagship offerings. Thanks to high midrange devices who offers top-caliber features, it almost doesn’t make sense to spend twice as much on a flagship smartphone.

One of the latest devices to have such characteristics is the Huawei Nova 5T. This one features four cameras on the back, a stylish design, and more importantly, a flagship processor for half the price of an actual flagship device. But not wanting to be left out, Xiaomi also introduced the Xiaomi Mi 9T Pro. This is the global version on the Redmi K20 Pro that was launched in China a couple of months back.

Just like the former, Xiaomi’s latest offering will also try to offer a couple of high-end specs that we never thought we’d see on a device at this price. With that, our Xiaomi Mi 9T Pro vs Huawei Nova 5T specs comparison will help you figure out which between these feature-packed entry-level smartphones is actually the better flagship alternative. Both the Xiaomi Mi 9T Pro and the Huawei Nova 5T are two of the best smartphones that you can get for under Php20k. That’s primarily due to the fact that they both run on powerful, flagship-level processors.

The Mi 9T Pro comes with a Qualcomm Snapdragon 855 chipset, which is seen in most Android flagships today. Meanwhile, the Nova 5T uses the company’s in-house Kirin 980 processor. That’s the same chipset found on the highly-celebrated P30 Pro. However, if we really have to choose who’s the best between the two, we’ll have the pick the Xiaomi Mi 9T Pro. Here are some of the reasons why:

The most obvious one that you would see in the specs list is the display. With the Mi 9T Pro, you’re already getting a 6.39-inch Super AMOLED screen, with HDR support and Corning Gorilla Glass 5 protection.

It even has an all-screen design thanks to its pop-up selfie camera. Meanwhile, the Nova 5T settles for a 6.26-inch IPS panel with a punch-hole cutout for the selfie camera. Xiaomi also managed to put a 4,000mAh battery on the Mi 9T Pro. That’s relatively bigger than the 3,750mAh capacity on the latter. The former also has a faster 27W charging support, versus the 22.5W on the Nova 5T. We also liked how more useful the cameras on the Mi 9T Pro is, despite only having three shooters on the back. There’s your standard 48-megapixel Sony IMX 586 sensor, bundled with an 8-megapixel camera with a 2x telephoto lens, and a 13-megapixel ultra-wide shooter.

The Huawei Nova 5T uses the same Sony sensor and has a more pixel-packed 16-megapixel ultra-wide shooter. Although I doubt that the two extra 2-megapixel sensors will have more use than the telephoto lens on the former. But to give the Nova 5T some credit, it does have a better 32-megapixel selfie camera on the front. While the Mi 9T Pro only has a 20-megapixel front sensor.

But still, we got to hand the win to the Xiaomi Mi 9T Pro. What adds up to its already great features is the in-display fingerprint scanner, which one-ups the side-mounted biometric sensor on the Nova 5T. Huawei also removed the headphone jack on the Nova 5T, while the Mi 9T Pro even have Qualcomm WCD9375 hi-res audio.

Still, the Huawei Nova 5T is not a terrible device. For a price of Php18,990, you’re getting more things that you never thought you can for the price.