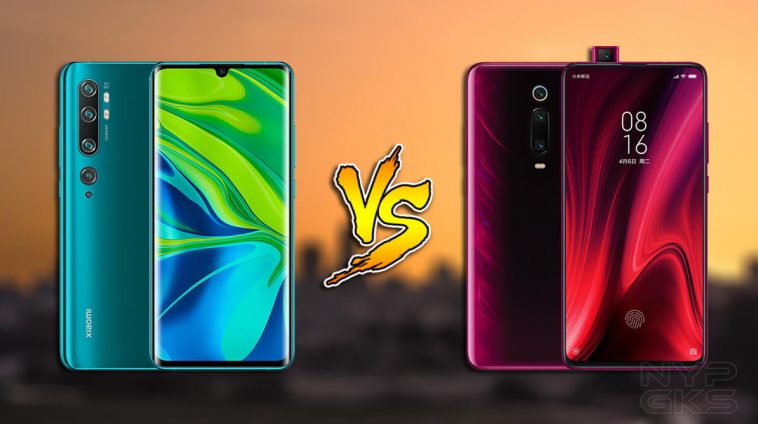 In today’s spec comparison, we’ll be comparing the newest phone killer release of Xiaomi to its own, slightly older bang-for-the-buck smartphone.

With the release of Xiaomi’s newest phone – it’s only right that we compare it to one of its older brothers to find out their exact difference. Especially, if the phones were only released 3 months apart – this is the case for the Xiaomi Mi Note 10 and the Xiaomi Mi 9T Pro.

Let’s start talking about the latest phone in Xiaomi’s line-up – the Xiaomi Mi Note 10. Probably the main selling point of the Mi Note 10 is its industry-first 108-megapixel camera.

This Samsung ISOCELL sensor was developed closely with Xiaomi. So it’s no surprise that the Chinese tech giant got first dibs on this sensor. Meanwhile, the second phone in this spec comparison is the Xiaomi Mi 9T Pro. The 9T Pro has a Qualcomm Snapdragon 855 chipset along with triple rear cameras.

There’s always been this notion that the newest phone is automatically the best compared to the old one – but is this the case? Let’s find out more about the two phones in our Xiaomi Mi Note 10 vs Mi 9T Pro specs comparison. There are some minor similarities between the two phones include a headphone jack, a Type-C port, and an under-display fingerprint scanner, etc. But as you can see, both phones differ from each other in major areas

Display-wise, the Xiaomi Mi 9T comes with a Super AMOLED touchscreen while the Xiaomi Mi Note 10 has an AMOLED display. Both phones are protected by Corning Gorilla Glass 5 protection. display size between the two phones is slightly different as the Mi Note 10 has a 6.47-inch display compared to the Mi 9T Pro’s 6.39-inch display. A small difference that isn’t that noticeable. For the camera setup, the Xiaomi Mi Note 10 has a 108-megapixel main camera – along with a 12-megapixel portrait camera, 5-megapixel (up to 50x zoom), 20-megapixel (ultrawide) and a 2-megapixel (macro) camera On the Battery front, the Xiaomi Mi Note 10 takes the win as it has a 5,260mAh battery along with a faster 30W charging feature compared to the 9T Pro’s 4,000mAh battery and 27W fast charging technology. Don’t be scared of the price difference though. Euro prices are generally more expensive when compared to other markets, especially here in Asia.

To conclude this spec comparison, if you’re looking for a phone that has the best possible performance, I would suggest getting the Xiaomi Mi 9T Pro due to its flagship processor.

Although, if the most important factor for you is a camera, getting the Xiaomi Mi Note 10 would be the best suggestion. Its 108-megapixel camera is an industry-first and might be too good to pass up.