Many of you are probably not familiar with them or might have heard about them just a little, but Plantronics has been around for a long time now.

Heck, they’ve even made an audio communication device back in the 1960s that transmitted the words spoken by Neil Armstrong when he made the monumental first step in the moon.

However, the company really aren’t making a lot of buzz in the mainstream industry as most of their products are designed for businesses and industry use. But in the recent years, Plantronics has proven that they also can take on the consumer market.

Recently, Plantronics unveiled their new line-up of wireless headphones and gaming headsets, which strengthens their presence in the market. The well-known BackBeat Pro line-up has also pleased its users for a while now gathering lots positive feedbacks. Today, we’re taking a look at one of its variant that’s aimed at the fitness junkies, the Plantronics BackBeat Fit.

But the thing is, the headphones market is quite saturated these days. Lots of budget alternatives have emerged, and a lot of high-end ones are still sitting on the top. So the question is, does this pair of cans have what it takes to stand out? Let’s figure that out.

In a hurry? Here’s our Plantronics BackBeat Fit Video Review

I’ll say this right away, Plantronics really nailed it in this department. The BackBeat Fit is designed with fitness and only fitness in mind. This thing has an IP57 waterproof rating, which means it can withstand minor water rinse, say, you’re running while the rain is pouring outside. The device also has P2i sweat proof nano-coating, so the headset can cope up with you as you go through your exercise routine. 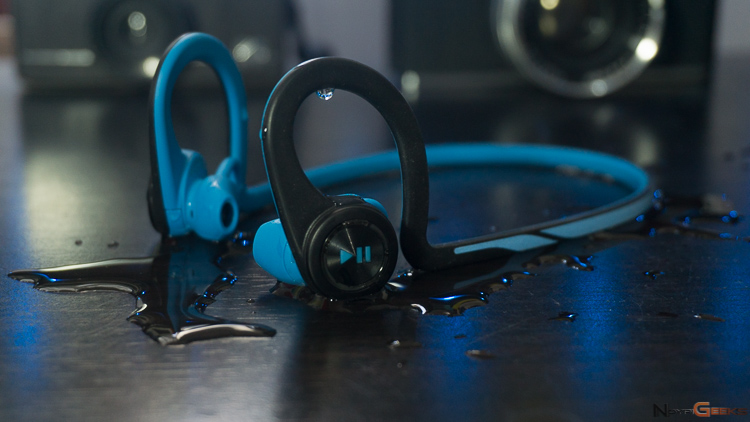 And just like most workout-centric headphones in the market today, the Plantronics BackBeat Fit also features a behind-the-ear design with a tiny wingtip to help the device stay in your ears as you move around. And I must say, this thing never fell off my ears during the whole time of my tests. I also didn’t experience any ear fatigue with its behind-the-ear design.

On the other hand, I have read other reviews of the Plantronics BackBeat Fit saying that they were bothered of the flapping cord movement that it makes during workouts. I didn’t experience it that much since I have a slightly large head. But for most people, it would have been nice if Plantronics added a clip or any other mechanism that can prevent the cord to be so loose. 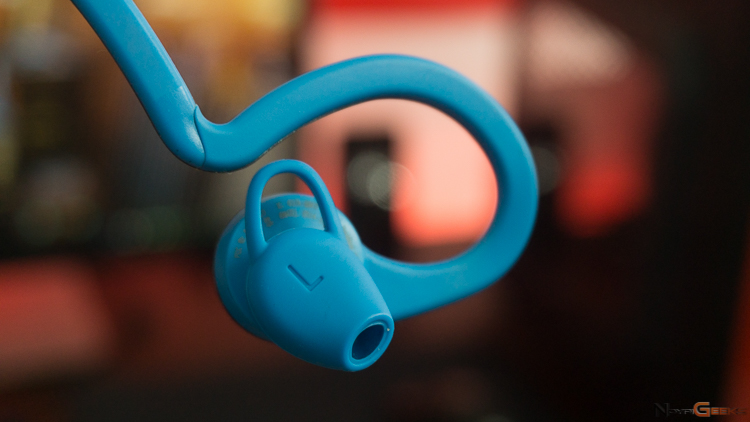 Probably what sets the Plantronics BackBeat Fit apart from its competitors is its open ear tip design. Which means that this thing doesn’t get shoved up in your ear, so you can still hear your surroundings, thus, making it perfect for when you’re running outside – and it really works.

However, this also means that it’s quite not recommendable for those who plan on using this on their daily commute or for those who are in the type of music with deep and heavy bass. The ear tips are also fixed and non-replaceable.

Other than its industrial build and design, the Plantronics BackBeat Fit also looks all pumped-up thanks to its sporty color variants. The one we have here is what they are calling the Power Blue. The BackBeat Fit is also available in Black Core, Fit Fuchsia, Stealth Green, and Sports Gray.

The Plantronics BackBeat Fit headphones, together with the included carrying case that doubles as an armband, are also made with reflective materials to improve safety when you’re going for a job at night. The carrying case works well for its purpose. I was able to fit a 4-inch iPhone 5s and a 5.2-inch Samsung Galaxy A5 (2017) on this thing. However, I think a 5.2-inch device is best that it can hold, so phablets are definitely not supported. 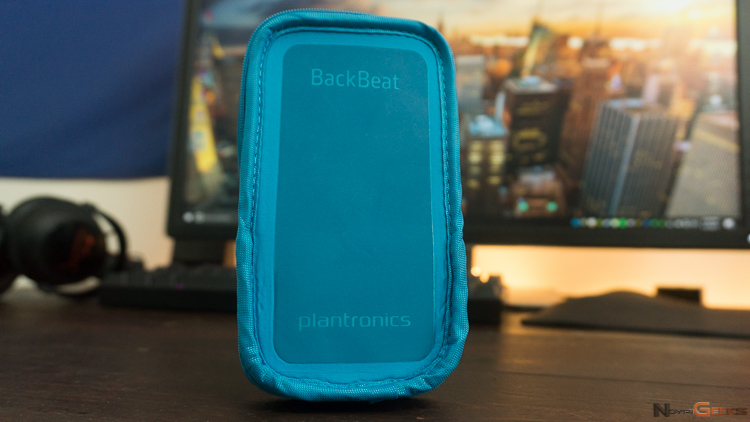 The Plantronics BackBeat Fit is also featherweight for a wireless headphone. This thing doesn’t have the usual in-line remote control which, in the case of wireless headphones, also houses the built-in microphone and the batteries. All of the buttons and the microUSB port for charging are situated in the earbuds themselves.

As for the battery, well, I genuinely have no idea where they hid it. But the bottom line is, it made the device lightweight.

And since we’re talking about buttons, let’s get straight right into that. The Plantronics BackBeat Fit has four buttons, with each of them offers different command functions depending on how you press them. Both the left and right earbuds have one large button, with the function engraved in them. The one on the left is for Play/Pause and skipping music, while the one at the left is for calls. There’s also one tiny button on each side of them, with the one in the left used for volume, and the one at the right is for power on/off, pairing and battery status check. There’s also a LED light at the right that flashes either Red or Blue. The LED light accentuates the button at it looks aesthetically pleasing in my opinion.

In my observation, design and comfort are the main focus of Plantronics on this fitness headphones. However, considering the company’s seniority in the audio industry, the audio quality department wasn’t just completely disregarded on the BackBeat Fit. And it shows.

Just like what I have said earlier, the Plantronics BackBeat Fit has an open ear tip design. The earbuds do not get shoved up in your ears, allowing the ambient sound to still get in making you aware of what’s going on in your surroundings. But because of that feature, low frequencies a.k.a bass levels aren’t as thumping as what you would experience in other headphones today. 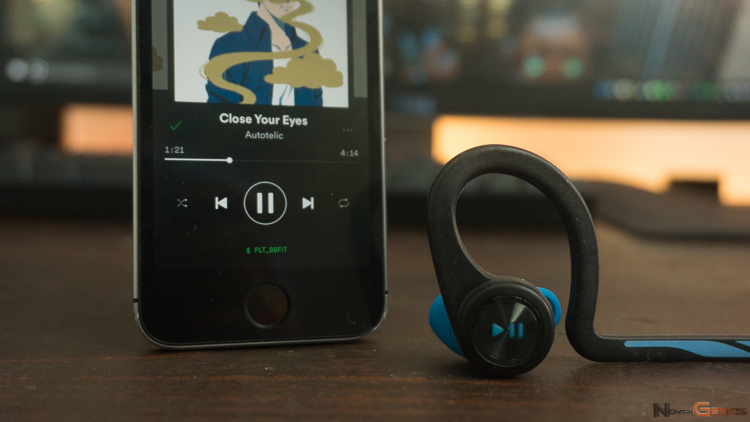 Now, if you can leave without that much bass, then you will surely be pleased with the sound quality that’s coming from the Plantronics BackBeat Fit. It has 13mm dynamic drivers with a frequency response of 50-20,000Hz. The high frequencies are clear and smooth, the mids also share the same identity. Listening to all kind of music are enjoyable on this thing.

On the other hand, the volume levels are on the conservative side. Although I know that the company wants the users to still be aware of what’s going on around them, but I wish the volume is a bit louder. They could’ve just let the owners have the control on how loud they want the volume to be.

For some reason, there are two official smartphones apps available for the BackBeat Fit. We have the BackBeat Fit companion app and the Plantronics Hub app. The first one offers an easy Connection Switcher for when you have multiple devices paired with the headphones. It also features a Pairing and Get Started Guide. Meanwhile, the latter has a more useful feature called Find MyHeadset which gives a geographical location of where your device is and lets you play a loud music on the headphone itself so you can easily find it.

These applications aren’t really that necessary since most of the wireless headphones in the market can be paired with any gadget easily. However, Plantronics is offering software updates on the BackBeat Fit’s firmware, which can be done wirelessly via the smartphone app.

Read: Samsung Wireless Audio 360 R1 Review: Round and round!

The Plantronics BackBeat Fit only has Bluetooth v3.0 that’s transmitting signals to your main device. The range is set to be up to 33 feet or 10 meters. While that’s just a rough estimation, I didn’t experience a complete disconnection while using the device. However, I have experienced some random choppiness on music playback, even when my phone is just in my jeans’ pocket. It’s not actually a huge deal-breaker, but still worth noting. The headphones also have eight-device memory.

The BackBeat Fit also features status alerts. There’s a Siri-like voice inside it that tells when the device is on/off, its battery status, or if it’s connected/disconnected, etc. Once the headset is powered on, it would automatically dictate the remaining listening time, which I find really nifty. If you’re on an iOS device, you can also monitor the BackBeat Fit’s battery life on the drop-down menu.

There’s no official word about the device’s exact battery capacity, but Plantronics is saying that it can last for up to 8 hours of music playback, 6 hours of talk time, 14 days of standby and 180 days when it is in DeepSleep mode hibernation mode. The DeepSleep mode is perfect if you decided not to use the headphones for a while, or completely gave up doing workouts. 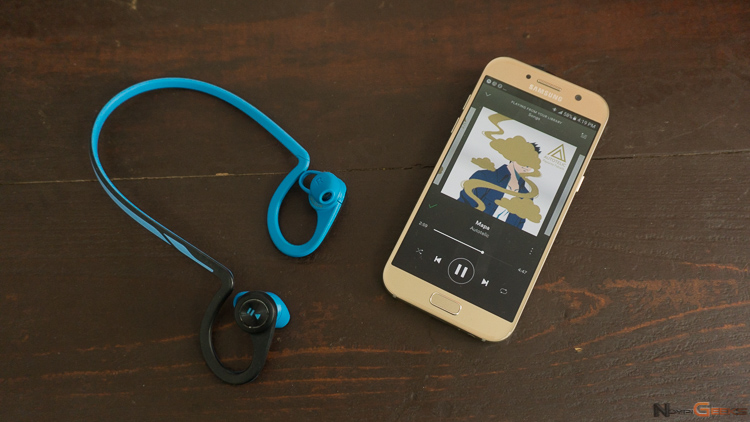 I did a battery drain test by fully charging the device, loop a single song, set the volume to up to 70%, and count the total plays until the headphones ran out of juice. The device was able to play a 3:36-minute long song for 94 times. And by the power of basic mathematics, we concluded that it was able to last for up to 5 hours and 38 minutes before it completely ran out of juice.

This test is aimed to give you a rough estimation on how long the battery can last as it will still depend on how you use it.

So, does the Plantronics BackBeat Fit have what it takes to be your next pair of wireless headphones? Well, it’s hard to tell. This thing retails for around Php4,449, depending on where you’ll get it. And for that price, there are surely a lot of cheaper and better-sounding alternatives out there.

But the thing is, the Plantronics BackBeat Fit is a workout-centric pair of headphones. While the sound it delivers may be lackluster for some, the real gym rats out there would surely appreciate this device.

The open ear tip design, the lightweight and no-fuss build, the waterproof, sweatproof and reflective look, and the inclusion of a carrying case that doubles as an armband – these are the major elements that make a good headphone for those who are into fitness.