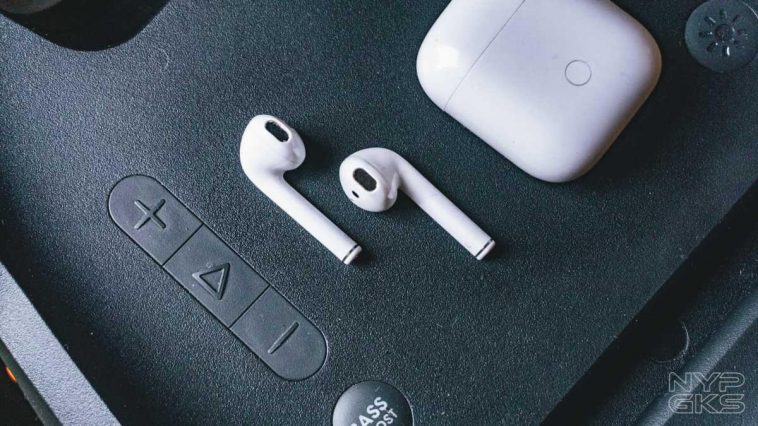 True wireless earphones (TWS) are gaining traction lately and Realme wants a piece of the pie. And without a doubt, this is the reason why they came up with the new Realme Buds Air.

The Realme Buds Air is the company’s first attempt to make TWS earphones — and it looks like they are on the right track.

But before we reveal why it’s one of the best budget TWS around, let’s talk about the design first.

As you can see, the Realme Buds Air has a very identical design to the most prominent TWS earphones around — the Apple AirPods. In fact, when it’s in your ears, you can almost tell no difference. Even the case has the same dental floss look.

The lack of originality might be a downer for enthusiasts like us, but I bet most people would really appreciate its AirPods-like design. Especially if you’re in it for the status symbol.

Other than the looks, it also inherited some of the design flaws that the AirPods have. The buds are plasticky and feel chip and the case is prone to hairline scratches.

However, the use of plastic made it really lightweight. You won’t feel any ear fatigue after extensive use — unlike how you’d feel on in-ear headphones.

I tried shaking my head and jumping all around to see if it falls off — it didn’t. Overall, the Realme Buds Air has a design that works, despite the lack of originality.

Pairing the Realme Buds Air is really easy. Just open case, long-press the button on the middle, wait until the light flashes in green, look it up on your phone, and voila!

The best part is, it works in pretty much any platform. I did my test primarily with an iOS device with my iPhone and a macOS with my MacBook Pro and it worked seamlessly. Even the smart detection, which auto play/pause the music when you take it off/on works on Apple device — which is rare in Android earbuds like these.

It also automatically connects to the last paired device when you open the case, whether it’s an Android or iOS device. The tap controls also work well, for as long as you get the perfect rhythm. A rapid tap doesn’t seem to work.

The only problem is, you can only update the Realme Buds Air via the Realme Link app, which only available in the Google Play Store.

Speaking of which, the app will give you more information and lets you configure your Realme Buds Air. For one, it shows the individual battery life of the Right and Left earbuds.

You can also customize the command when you tap twice, thrice, and long-press each earbud.

What makes all of its smart software features possible is its dedicated Realme R1 chip. And thanks to Bluetooth 5.0, it has a dual-channel transmission with super low-latency.

With this, you can enable Game Mode for a lag-free audio experience, which you can also use when watching movies. No more unsynchronized audio when watching your favorite shows or movies.

Now, let’s talk about the most important stuff — sound quality.

The Realme Buds Air has 12mm ‘Big Bass’ drivers. It outputs loud volume with an emphasis on bass — albeit not as thumbing as the in-ear ones. Although, the highs/treble/vocals can get distorted at high volume.

The treble is clean and the bass is audible. Overall, the sound quality is nice on the Realme Buds Air, especially when you consider the price.

However, you might want to pair it with an Android phone to unlock its full potential. As per my testing, the volume is a little low on my iPhone XR.

Each bud has a dual microphone for Environment Noise Cancellation (ENC) when making calls. And as per my testing, this is one of the best TWS out there for hands-free calls.

Whether it’s voice or videocall, the microphones on the Realme Buds Air can pick-up your voice clearly. I’ve been using it for video calls for over a month and I received no complaints from the other line.

Realme claims that the Realme Buds Air has a battery life that can last for a total of 17 hours, with each buds carrying 3-hours worth of music playback. Those numbers are close to the one we got during our testing.

If you’re only using it on your daily commute, then you might only have to charge it once a week. But if you’re like us who listens to music while working, the battery life estimate might be shortened to two to three days.

What we really liked about the Realme Buds Air is its charging feature. First, there’s the USB Type-C port on the bottom of the case, which you can plug the included USB Type-C cable.

Probably the best feature is the included wireless charging support. A surprising addition to a very affordable TWS earphone.

If you’re interested in getting one, the Realme Buds Air is available in the Philippines for a price of only Php3,990. Considering all of the features you’d be getting, we can recommend it as a real bang-for-the-buck wireless earphones in the market today.

You can get it in tons of Realme kiosks and stores in the PH, as well as in their online store on Lazada and Shopee