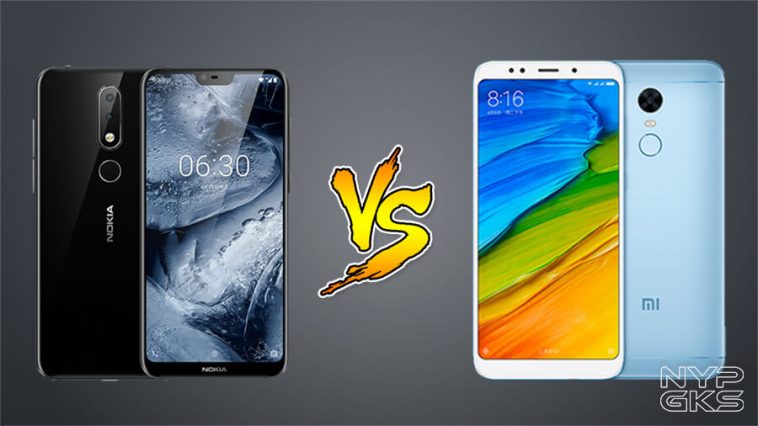 Xiaomi gained a lot of fame because of their affordable smartphones. These guys are known to come up with the best possible product, at the cheapest possible price.

However, Xiaomi is facing new competition from one of the best brands from the past — Nokia. Under HMD Global, Nokia is making a comeback as a smartphone manufacturer that offers new products that break the norm.

If you’ve been following their latest releases, Nokia has been coming up with new handsets that offer some of the best specs that most of the competition on that particular price bracket fails to deliver — making them a worthy competitor to Xiaomi.

Just recently, the company announced the new Nokia X6 — a smartphone that has a good set of specs to justify its price tag. This smartphone, obviously, will also go against Xiaomi’s offering — the Redmi Note 5. So the question is, which between these two devices actually offer the better deal? Does the Nokia X6 have what it takes to take on the crowd-favorite Redmi Note 5? Or will Xiaomi continue to own the crown? That’s what we are about to find out in our Xiaomi Redmi Note 5 and Nokia X6 specifications and features comparison. In an unsurprising feat, the Xiaomi Redmi Note 5 clearly beat the Nokia X6 in the comparison table above. Sure, the two shares a lot of identical hardware in key areas, but the Redmi Note 5’s higher numbers in some categories ultimately gave it a win.

But before we name the reasons why, let’s first check the key similarities between the two. To start, we have the identical displays Both devices use a Full HD+ screen but they differ in screen sizes. The Redmi Note 5 is slightly larger with its 5.99-inches display, but the screen notch and the 19:9 aspect ratio on the X6 makes it look more modern and appealing.

Both phones run on a 1.8GHz Qualcomm Snapdragon 636 octa-core processor which is definitely the one of the best (if not the best) chipset that you can find on a smartphone in this category. The Nokia X6 is available in different memory and storage configuration, but we definitely expect the 4GB/64GB to arrive here in the Philippines, just like the Redmi Note 5. Now, let’s list some of the things that set these devices apart. First is the most obvious of them all — the design. This segment is actually subjective, although I do think that most people would agree that the Nokia X6 looks more stylish and elegant.

The Nokia X6 also has better dual front and rear cameras with their higher-resolution sensors. On top of that, the X6 comes with a face unlock feature — something that Xiaomi hasn’t figured out yet on how to incorporate in their cheaper devices like the Redmi Note 5. Lastly, the Nokia X6 runs on a clean, stock Android 8.1 Oreo interface. Meanwhile, the Redmi Note 5 is still layered by their own MIUI 9.5 UI. Again, this is part is also subjective. If you’re a real Android enthusiast, you’d appreciate the X6’s clean look. However, a lot of people are actually a fan of Xiaomi’s MIUI interface.

The Nokia X6 might have more extra features that they did better than the Redmi Note 5. However, the few good things about Xiaomi’s offering might actually be better in real-world usage.

Other highlights include an IR Blaster which can come handy if you have non-smart appliances at home. Lastly, the Note 5’s large 4,000mAh battery means that you can use this device longer than the Nokia X6. The Redmi Note 5 has an official price of Phph11,990 in the Philippines. On the other hand, the Nokia X6 is yet to be launched in the country.

But in China, the X6 retails for a price of CNY11,900 — which is around Php11,900 when directly converted to Philippine peso. That price can still inflate once it arrives here in the country, so it’s possible that the Nokia X6 to be a little bit pricier than the Redmi Note 5.

With that in mind, it’s safe to say that the Xiaomi Redmi Note 5 is the obvious winner here.