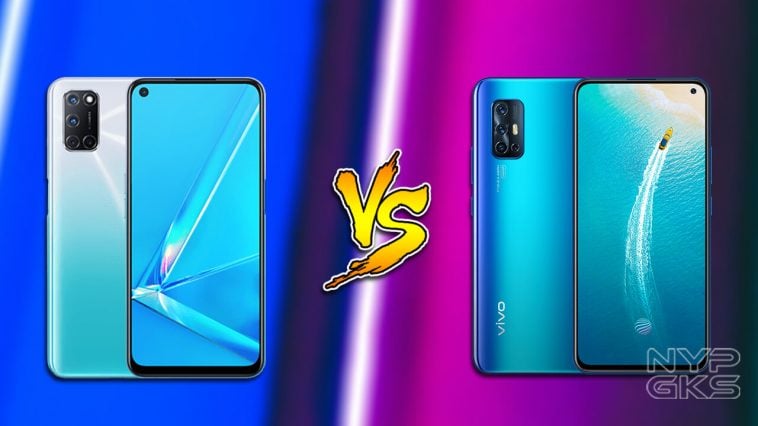 OPPO and Vivo, two of the most popular names in the local smartphone market, just launched their latest mid-range phones in the country.

First, we have OPPO, who just brought the OPPO A92 in the country. This device packs a lot of features that make it a good option for those looking for an entertainment and gaming device.

To go against it, Vivo also launched the Vivo V19 Neo in the Philippines.

Much like the former, it features a cool design and a set of features that makes it a suitable daily-driver smartphone.

With that, here in our OPPO A92 versus Vivo V19 Neo specifications and features comparison, we’ll see which between the two is right for you.

Both the OPPO A92 and Vivo V19 Neo have their own respective appeal in terms of design. But generally, they look relatively identical.

Both devices feature a glass-like plastic material on the back that’s reflective and premium-looking. The OPPO A92 is available in Twilight Black, and a Shining White option that looks really clean with an aquamarine color accent.

The cameras are on a symetrical orientation inside a rectangular glass on the top left. We also have a clean look on the front, with ultra-thin bezels and the selfie camera inside a punch-hole on the top left.

On the other hand, the Vivo V19 Neo looks a little similar. There are the quad cameras on a similar glass on the top left, with a relocated fingerprint scanner to make the back panel cleaner. It’s available in Crystal White, and an Admiral Blue option that has more character. Unlike the former, the color gradient transitions horizontally.

The punch-hole on the front was relocated to the other side. But with the V19 Neo, since it uses an AMOLED panel, it has a better screen-to-body ratio with its thinner bezels.

As you saw in our specs comparison table above, the Vivo V19 Neo cost more than the OPPO A92. The extra price you’re paying goes to its more vibrant and colorful Super AMOLED panel, while the latter settles for an IPS panel.

There are other benefits to using an AMOLED screen than having better colors. There’s the always-on feature that lets you see the time and notifications without having to touch the device. It also consumes less battery.

Other than the display, you also have to pay more to get a better processor on these two. As you just saw, the Vivo V19 Neo features a Qualcomm Snapdragon 675 octa-core processor that’s obviously newer and better than the Snapdragon 665 of the OPPO A92.

Both models come with 8GB of RAM and 128GB of storage. But still, expect to get slightly better performance out of the Vivo V19 Neo, since it also has a faster Adreno 616 GPU for games.

Both devices come with 48-megapixel main cameras, 8-megapixel ultra-wide shooters, and 2-megapixel depth sensors. The V19 Neo has a macro camera, which we find more useful than the monochrome sensor of the OPPO A92.

Where the V19 Neo takes the lead is on its 32-megapixel selfie camera. That’s twice the pixels that the 16-megapixel front-facing camera that the OPPO A92 have.

The OPPO A92 finally takes a win in the battery department. This one has a 5,000mAh capacity, which is larger than the 4,500mAh battery that the former have.

With its size, OPPO allows you to use it as a power bank using an OTG cable. However, both devices do come with 18W fast charging support.

OPPO is marketing the A92 for those who like binge watching Netflix shows and YouTube videos. So other than having a large screen, the OPPO A92 also has a stereo speaker setup. A feature that’s missing on the Vivo V19 Neo.

However, the Vivo V19 Neo further justifies its premium-midrange status by having an in-display fingerprint scanner. While on the other hand, the OPPO A92 settles for a side-mounted scanner.

The Vivo V19 Neo obviously takes the crown in this specs comparison with its more powerful processor, Super AMOLED screen, sharper selfie camera, and advanced UD fingerprint scanner. But with its price of Php17,999, it costs Php2,000 more than the A92’s Php15,990 SRP.

So if you don’t mind settling for a slightly less powerful processor and an IPS display, the OPPO A92 offers a cheaper price while also having a larger battery, stereo speakers, and the same 8GB of RAM and 128GB of expandable storage. We have a full review of this device for you to check out. But if money is not an issue, the Vivo V19 Neo is also a good choice.