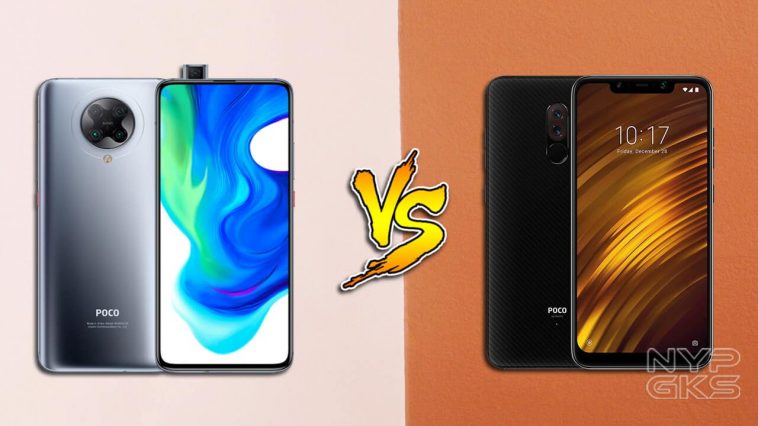 How good is the POCO F2 Pro compared to the old POCO F1? Let’s find out.

At long last, the POCO F2 Pro have finally reached the Philippines. The POCO F2 Pro bring a couple of flagship-level specs for less. More importantly, the powerful Qualcomm Snapdragon 865 octa-core processor. That’s the same chipset found on devices that’s almost twice its price, making it the cheapest device in the Philippines to have it.

However, compared to the Pocophone F1, the F2 Pro had a noticeable price increase — which made us really curious as to how the newer model is really better from its predecessor. We’ll find the answer in our POCO F2 Pro versus POCO F1 specifications and features comparison.

By looking at the design, you can already tell that the POCO F2 Pro is more premium than the POCO F1 — which is one of the reasons for the price hike.

The older model suffered from a thick iPhone-like notch, while its successor gave us an all-screen look thanks to the pop-up mechanism that’s hiding the selfie camera. Although, it made it lose any water and dust protection.

Both the front and back of the F2 Pro has a solid Corning Gorilla Glass 5 protection, while the former has an unspecified Gorilla Glass screen and a polycarbonate back panel.

With its glass back, unique camera placement, and livelier color options, the POCO F2 Pro looks and feels more premium than the Pocophone F1.

Xiaomi also drastically improved the display on the POCO F2 Pro. Part of the price increase went to its larger 6.67-inch FHD+ screen, which now also has a more vibrant and contrasty AMOLED panel. This allowed the device to have an in-display fingerprint scanner, instead of having it on the back like the F1.

Disappointingly, the F2 Pro still lacks 90Hz refresh rate. But the 180Hz sampling rate will make it more responsive to touch than the F1. It also has HDR10+ support, which we only saw on high-end smartphone during the F1’s time.

Xiaomi also improved the thermal management on this one. It now has Vapor Chamber cooling, which shall do a better job than the Liquid Cool of the former.

The POCO F2 Pro also has the usual upgrades like the new Adreno 650 GPU, more RAM capacity, and a faster UFS 3.0 storage. However, it lacks the storage expandability of its predecessor.

Xiaomi is clearly making the POCO series fancier than what it used to be, which is really evident in the camera department.

POCO F2 now has a quad-camera setup on the back, led by a 64-megapixel main shooter with OIS and a 13-megapixel ultra-wide. It can also shoot 8K videos and record 960fps slow-mo at 1080p.

Both devices have 20-megapixel selfie snappers, but the F2 Pro has a new 120fps slow-mo selfie that you can play with.

That sure is a step up over the POCO F1, whose main camera considered as on-par with the iPhone 8. A device that’s about three times its price.

Xiaomi also upgraded the battery on the POCO F2 Pro. You’d think this is just a standard update, but considering that most high-end phones only come with 4,000mAh or less, a jump to 4,700mAh is highly appreciated.

The POCO F2 Pro is one of the first smartphones to enter the new era of connectivity. This device has 5G, making it one of the cheapest devices in the Philippines to have it.

In addition, there’s WiFi 6, Bluetooth 5.1, and dual-band GPS. These are the wireless standard that we’ll see flourish in the next three to five years. It also has NFC for those who actually use it.

Moreover, the Pocophone F1 managed to get the new Android 10 update. Let’s just wish that the Android update support will be as long as the POCO F2 Pro.

Clearly, Xiaomi was able to justify the price increase on the POCO F2 Pro. It has a more premium glass-on-glass design, an advanced pop-up camera, larger and more colorful screen, and an advanced set of cameras.

However, it lacks a major appeal of the original POCO F1: the ‘affordable’ price. That device came with a flagship processor for a starting price of only Php17,990. But now, the F2 Pro’s base model cost Php9,000 more at Php26,990.

It would be nice to see a stripped off version of this device. Hopefully, once the vanilla POCO F2 comes out, it will be less than Php20,000. We don’t mind having a fancy set of cameras, screen, and design, for as long as the flagship Snapdragon 865 processor is kept.