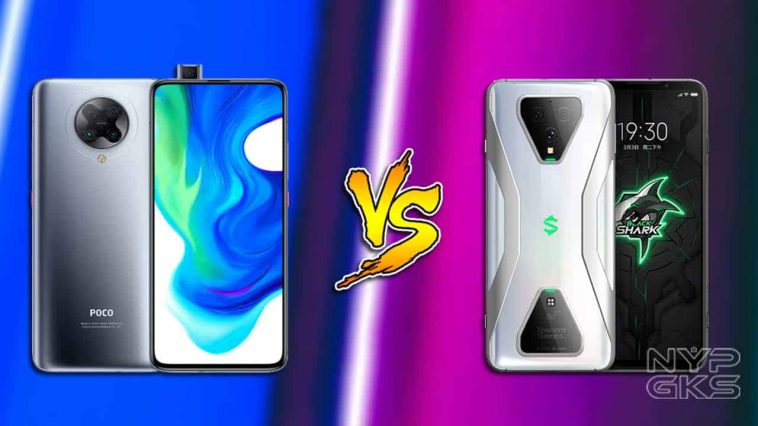 Xiaomi has a very vast portfolio of smartphones that they had to make separate sub-brands for it.

One of them is POCO, who just released its new POCO F2 Pro in the Philippines. This is the much-awaited successor of the POCO F1 from two years. ago.

Just like its predecessor, the F2 Pro takes pride of having top flagship specs, without the ludicrous price tag.

However, it’s not the only device that passes this category. Xiaomi’s gaming brand also released the Black Shark 3. As the name suggests, it comes with a powerful set of hardware to satisfy those people who demand a lot from their phones.

So here in our POCO F2 Pro versus Black Shark 3 specifications and features comparison, we’ll see which between these affordable high-end Xiaomi devices is right for you.

Clearly, the Black Shark 3 is made for gamers. If you’re one of them, then you’re probably into aggressive and edgy designs, which this device clearly has.

It has striking design accents on the back, complete with the RGB-lit logo, of course. You can get it in Lightning Black, Armor Gray, and Start Silver.

However, at 10.42mm, it’s noticeably thick and chunky. So if you want a more normal, straightforward, and elegant looking device, you might be better off with the F2 Pro.

However, it does have some unique aesthetic touches. There’s the quad-camera on the back in an ‘X’ array. Plus, a pop-up selfie camera that results to an all-screen display.

Both the POCO F2 Pro and Black Shark 3 have identical 6.7-inch FHD+ AMOLED screens with HDR10 support. Xiaomi is sparing us with the annoying notch by adding a pop-up mechanism on the F2 Pro, while the Black Shark one has uniform bezels all around.

But, we’re giving a huge plus score on the Black Shark 3 thanks to its smooth 90Hz refresh rate and a dedicated MEMC 2.0 display processor that converts regular 25Hz videos to match the screen.

It also has a 270Hz touch sampling rate, which is said to be the fastest on a mobile device. This basically enhances the responsiveness of the device on every press.

So basically, the Black Shark 3 wins this round. The smooth refresh rate is not only good for gaming but in almost all types of tasks.

The main highlight of these two devices is their flagship processors. Both the F2 Pro and Black Shark 3 come with 2.84GHz Qualcomm Snapdragon 865 processors, which is currently the best processor in the market based on AnTuTu.

One of the main difference here is the cooling system used. The POCO F2 Pro has a vapor chamber cooling. That’s great and all, but we’re expecting to get better thermals on the dual heatsink that sandwiches the motherboard of the Black Shark 3.

However, both devices lack a microSD card for storage expansion, which can be a big bummer for power users out there.

Bottomline is, the Black Shark 3 Pro should offer faster and better performance thanks to its well-cooled processor and 90Hz screen.

As stated earlier, the Black Shark 3 was made for gamers. Hence the focus on performance, but a slight lack of attention in the camera department. Both smartphones share the same sensors. But looking closely, you’d see that the POCO F2 Pro has better camera features.

The two has the same 64-megapixel main cameras, but the F2 Pro has an optical image stabilizer. This lets you take sharper images, even when walking. Plus, clearer pictures at night.

It also has 8K video recording and lets you play with the 120fps slow-mo selfie feature. These features are missing on the Black Shark 3 Pro, at least until a big software update arrives.

Other than the processors, gamers demand a reliable battery out of their smartphones. In this case, both devices have similar battery capacities. A 4,700mAh battery is really generous for this kind of device, which only normally have 4,000mAh.

But where the Xiaomi Black Shark 3 shines is in charging. It has a 65W fast charger, which is about two times faster than what the F2 Pro have. You can also purchase a special magnetic charger, which attaches on the magnetic pins on the side, so you can charge comfortably even while gaming.

Just like most gaming smartphones, the Black Shark 3 has a couple of extra features and shenanigans. Most notably, an array of Black Shark gaming accessories like attachable controllers, TV dongle, braided cables, and more.

Xiaomi even used a special Android 10-based JOYUI 11 interface that compliments the devices design.

Oddly enough, the Black Shark 3 only has Bluetooth 5.0, while the former has the more reliable and power efficient Bluetooth 5.1. The F2 Pro also has dual-frequency GPS and NFC.

So, which between these device should you get? Well, if specs and specs alone is what you’re after, then the obvious option is the Black Shark 3.

This thing has a smoother display, aggressive gamer design and accessories, dual heatsink to maintain top performance after hours of gaming, and a much faster charging technology.

However, you’d have to pay for the price premium for it. With that, you might be better off with the POCO F2 Pro. Despite the cheaper price tag, you’re getting the same processor, identical cameras — all in a much cleaner and compact design.