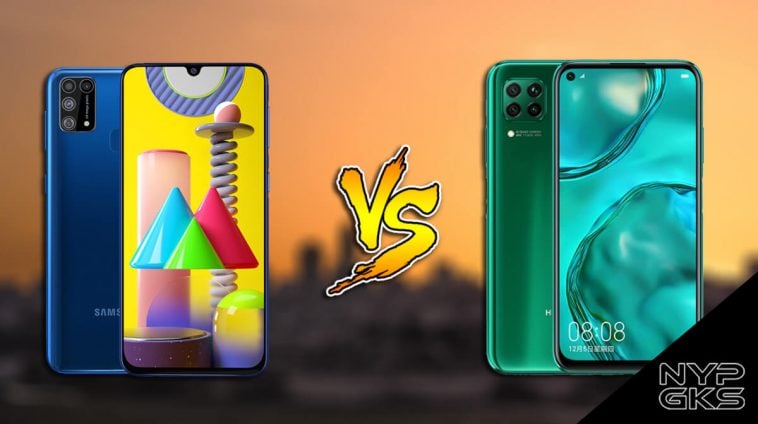 We’re just two months in on 2020 and we’ve already seen a lot of new smartphones. From low-end to high-end ones.

But as you know, midrange handsets are still the most popular in the Philippines. So in today’s specs comparison, we’ll be comparing two new smartphones in this category to anticipate their arrival in the country.

The first one is the Huawei Nova 7i, coming from a line of mid-range smartphone that has been so popular in the Philippines thanks to the incredible value they were able to offer for the price.

On the right corner, we have the newly-released Samsung Galaxy M31. The Samsung M-series’ value-oriented nature separates itself from other Galaxy devices. Something that the company really needs to impress the emerging markets.

With that, here in our Samsung Galaxy M31 versus Huawei Nova 7i specifications and features comparison, we’ll see which between these two devices is worth your time and money. Let’s begin.

By looking at their price differences, the Samsung Galaxy M31 is easily the underdog on this one. The Huawei Nova 7i has a more premium SRP that’s around Php3,000 more than the former.

But as you just saw, Samsung’s sub-Php10k device has a few better features than Huawei’s sub-Php13k midrange device.

One of its biggest wins is in the camera department. Samsung’s bet comes with a 64-megapixel primary sensor. That should offer better image quality than the 48-megapixel shooter on the Nova 7i.

Samsung’s handset also has a 6,000mAh battery. That easily towers the 4,200mAh battery on the former.

But to Huawei’s credit, the Nova 7i does come with other features that may justify the price mark up.

For one, it has a Kirin 810 processor. As per a lot of benchmarks and performance reviews, it offers faster horsepower than the Exynos 9811 of the Galaxy M31.

That’s coupled with 8GB of RAM — 2GB more than the 6GB of memory that the competition has.

It may have a smaller battery, but the Nova 7i does come with a 40W Huawei SuperCharge technology. This easily puts the standard 15W charger of the Galaxy M31 to shame.

But at the end of the day, we think that most people will still prefer a cheaper device that has a bigger battery and better cameras such as the Samsung Galaxy M31. Oh, and of course, there’s the issue of Google Mobile Services not being supported on the Nova 7i.

But if you want the best possible performance for the price, between the two, you’re better off with the Huawei Nova 7i.

Both the pricing and availability devices of both devices in the Philippines are yet to be announced, so stay tuned for that.