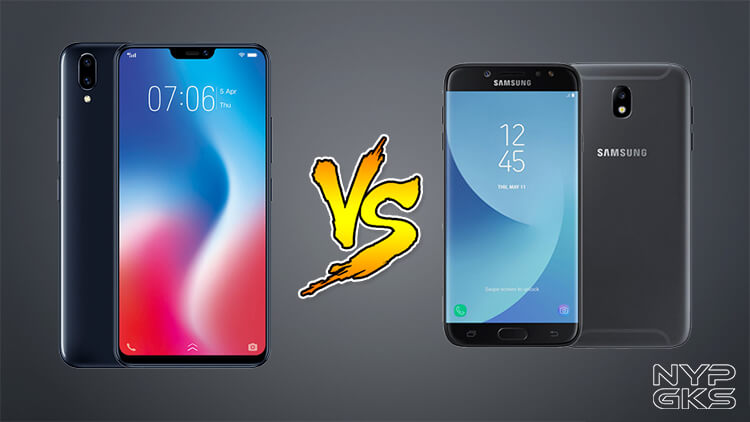 Vivo’s latest smartphone — the Vivo V9 — is finally here. This device offers a compelling design and good set of features. However, it is clearly not the only capable device in the midrange category.

As you all know, the midrange smartphone sector is probably the most saturated category here in the Philippines. These devices provide good looks, acceptable performance, and budget-friendly price that makes it the perfect companion for every Filipino.

With that said, the Vivo V9 will be competing with other devices from a bigger brand — Samsung.

Right off the bat, the Galaxy J7 Pro already has the brand familiarity and reputation to its advantage. But in today’s generation, people are now much wiser and smarter. So, you can expect them to look beyond the name.

And on that aspect is were the V9 can turn things around. Through this Vivo V9 and Samsung Galaxy J7 Pro specs comparison, we aim to show which between the two can really offer better value for the money. Let’s start!

The Vivo V9 clearly beats the Samsung Galaxy J7 Pro in a lot of aspects.

For starters, it runs on the latest Android 8.1 Oreo. Although a few people might not find its FunTouchOS 4.0 interface appealing, the same can be said about the Samsung Experience UI found on the H7 Pro. The former also has a bigger and more appealing 6.3-inch IPS screen, with ultra-thin bezels but with a display notch on top. However, the screen on the Galaxy J7 Pro is not too shabby either. Its AMOLED panel enables the Always-On technology and is noticeably better than IPS in term of quality. Vivo V9’s 24-megapixel front camera and 16-megapixel and 5-megapixel dual rear cameras are obviously better than the 13-megapixel cameras found on the front and back of the Galaxy J7 Pro in terms of raw numbers. But if it were any consolation, the Galaxy J7 Pro does have a bigger battery. Its 3,600mAh battery is noticeably bigger than the 3,260mAh capacity found on the V9. And considering that the V9 has a more demanding hardware to power, it’s safe to assume that it will also have lower battery longevity compared to the Galaxy J7 Pro.

However, I do think that the extra cash you’d be paying for the Vivo V9 is worth it. It has a better display, performance, and set of cameras. But if you choose to save some extra bucks, going with the Samsung Galaxy J7 Pro is not a bad idea either.