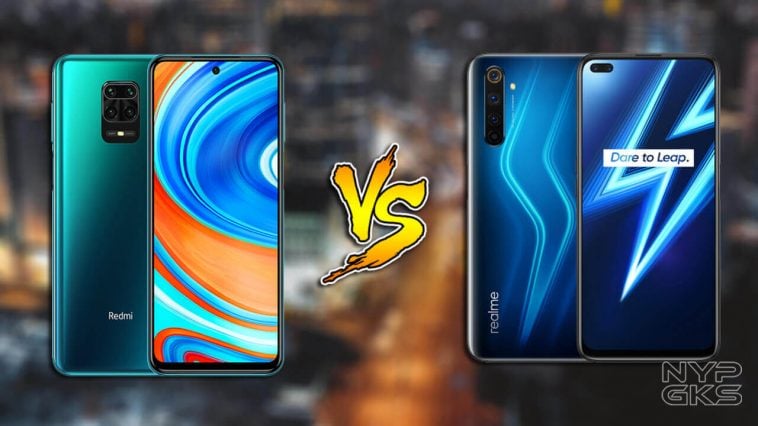 Two of the most popular and highly-anticipated midrange phones for the year 2020 are finally official.

The first one that came out is the Realme 6 Pro. It garnered a lot of buzz when it came out thanks to its impressive features, which we don’t usually see on smartphones as affordable as this.

Clearly, you don’t have to spend a lot of money to get a proper — and even powerful — smartphone experience.

Alongside Realme’s release, Xiaomi has also put out its latest offering in the sub-Php12k category — the Xiaomi Redmi Note 9 Pro.

Coming from a popular line of budget devices, the expectations are high on this Redmi device.

So today, we want to see if Xiaomi was able to meet everyone’s expectations. How does it stack up with Realme’s latest? And ultimately, help you decide which between these two is right for you. Let’s start our Xiaomi Redmi Note 9 Pro Max versus Realme 6 Pro specifications and features comparison.

Coming from the same price range and the drive to lure a lot of customers in, both the Xiaomi Redmi Note 9 Pro Max and Realme 6 Pro are pretty much identical devices — at least in some key areas.

However, it looks like Xiaomi lost its magic as Realme’s bet outshines it by having better features in the display and camera department.

For starters, the Realme 6 Pro has a more modern and faster screen. It sports a 6.6-inch FHD+ IPS screen, that has a fast refresh rate of 90Hz — which the Redmi Note 9 Pro Max lacks.

Having a faster screen will make the Realme 6 Pro feel smoother and more responsive. That’s despite the fact that they share the same 2.3GHz Qualcomm Snapdragon 720G octa-core processor.

Another perk of going with the Realme 6 Pro is the cameras. The Redmi Note 9 Pro Max might have a better 32-megapixel selfie camera versus the 16-megapixels on the Realme 6 Pro, but that’s not all that matters.

The Realme 6 Pro does have a secondary 8-megapixel ultra-wide shooter, providing flexibility for group shots or if you want to take a travel selfie with a beautiful background.

The Realme 6 Pro is equipped with a 12-megapixel telephoto camera, which can do 2x of optical zoom and 20x of digital zoom. That completes the quad-cameras on this device, while the Xiaomi Redmi Note 9 Pro Max settles for a 2-megapixel depth sensor.

As I said earlier, the two are pretty much the same device, which is why they share the same 64-megapixel primary camera, 8-megapixel ultra-wide, and 2-megapixel macro sensors.

You can also notice their cleaner design on the back. That’s because the fingerprint scanner was relocated on the sides, doubling as the lock/power switch.

But to Xiaomi’s credit, the Redmi Note 9 Pro Max does come with a 5,020mAh battery capacity, bigger than the 4,300mAh on the Realme 6 Pro. It also has 33W fast charging support, marginally faster than the 30W output on the latter.

In the end, it looks like the Realme 6 Pro is the winner here thanks to its faster screen and better cameras. Pricing-wise, the two handsets are priced similarly, although the Realme 6 Pro is a little bit more expensive in some configurations. The release details for both devices here in the Philippines is yet to be announced, so make sure you stay tuned for that.