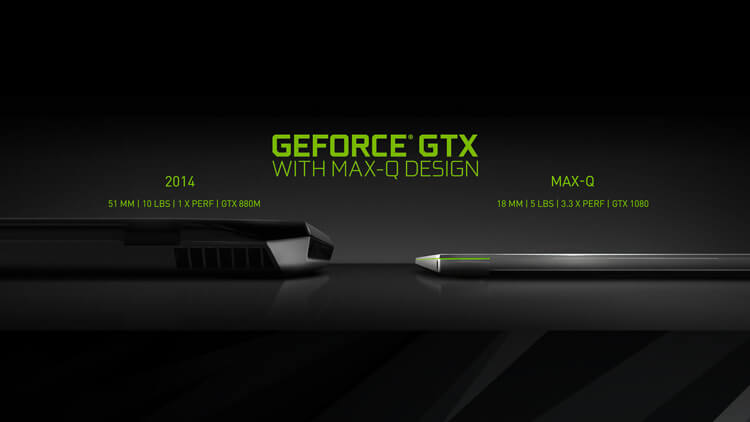 There’s no denying that PC gaming is popular today. Some gamers settle for a more powerful desktop, while some go the portable route. Thus, the popularity of gaming laptops.

As per NVIDIA, there were 10 million sold last year. Hence, they’re giving it a well-deserved attention by introducing this new technology.

The NVIDIA Max-Q is an overall design approach that aims to make gaming laptops thinner and lighter. As we all know, powerful laptops have the reputation of being bulky and heavy — and that’s what NVIDIA is trying to address here. Imagine the power of an enormous gaming notebook like the new Lenovo Legion Y820 trapped in a small body like the MacBook. Now that’s what’s up.

To achieve the portable title, NVIDIA said that this new technology can cut the power consumption of the GTX 1080 by 50%, allowing it to fit in an ultraportable laptop. NVIDIA Max-Q can make the GPU run efficiently, which will result in a more quiet and cooler operation.

NVIDIA is also requiring manufacturers to work closely with them in designing the hardware of the actual product. It’s refreshing to hear that brands are collaborating intensively to create a great product for the consumers.

And don’t you dare think that this is too good to be true. In fact, some laptops were already showcased at the COMPUTEX 2017 in Taipei. Out of the new products, the ASUS ROG Zephyrus is the slickest of them all. The Zephyrus has a GTX 1080 GPU that’s powering its 120Hz G-Sync monitor. What’s more interesting is, it’s only 17.9mm thick. For a perspective, the latest MacBook Pro is only at 14.9mm.

The first laptops that are equipped with NVIDIA Max-Q will be available beginning June. We’re pretty excited to see how it really performs in real world scenarios.