The newly announced iOS 11 update from Apple will bring refinements on the iPhone’s user experience. But where the new operating system shines most is on the tablet version. The iOS 11 for iPads will provide new features for you to fully utilize its power and large screen real estate.

Other than the new iOS 11 features that we have listed on our last article, today we’ll be laying out its unmentioned improvements that are made with the iPad in mind.

It looks like Apple is slowly turning the iPad in to a Mac. Which kind of makes sense considering how big the new Apple tablets are getting.

In the new update, the company is bringing a new Dock, which now kind of works like the one we see on macOS. Instead of just staying at the home screen, it can now be summoned from anywhere with just a simple swipe up.

You can now also customize the Dock and add as many apps as you want. It can also intelligently suggest apps based on your work routines or recommend the app you last opened from your iPhone or Mac.

The new Dock can greatly improve productivity, which is one of the prowess of a large and powerful device like this. If you’re in an app, you can open a second app via the dock and have it running side by side.

This is not the first one anyone has done this since some Android handsets already has this feature for quite some time now. This new feature allows you to move and copy things from one app to another in split-screen mode — you just have to simply drag and drop it. You can move texts, photos, and files seamlessly.

Typing on an iOS 11-powered iPad just a bit easier now. Apple placed the letters, numbers, symbols, and punctuations displayed into one keyboard.

The Apple Pencil is playing catch up

Apple finally realized what are the things that the Apple Pencil can do — features that should have been there since day one.

Apple is introducing Instant Markup, which lets you play with a PDF file or a screenshot. It lets you draw, write a note, or highlight something. 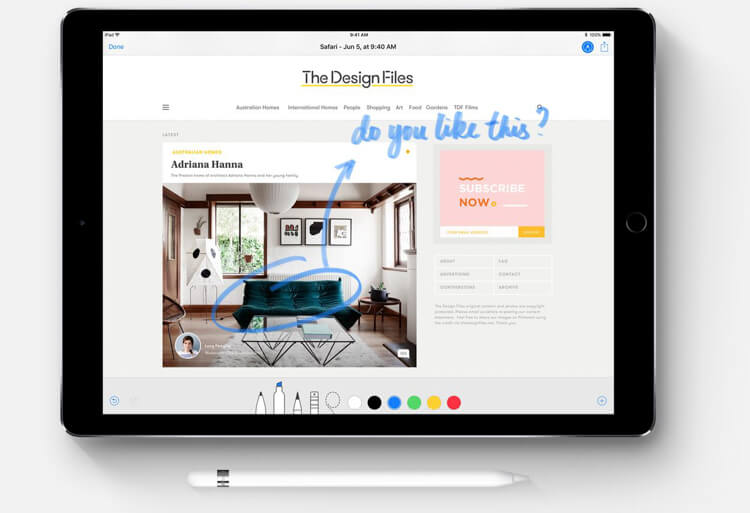 Users can now also use Instant Note, which would only require a simple tap of the Pencil to the iPad’s lock screen to launch.

With iOS 11, you can now also use the iPad to scan and sign documents for digital filing. With the new operating system, Apple is now adding a Document Scanner to the Notes app. The feature will work just like the new Adobe Scan app, however, you can fill in the blanks or sign the document on this one thanks to the Apple Pencil.

Tim Cook, Apple’s CEO, have already said in his previous interview that they are looking at AR as a big deal. And that clearly shows in this year’s WWDC.

Other than the powerful new iMac that can support AR, Apple is also introducing ARKit. The ARKit will not directly affect consumers as it is a framework built for developers. But the good news is, this will let developers create apps and contents that will bring AR experience right on your iOS device.

The new iOS 11 is already available as a developer preview and will start seeding to public beta testers later this month. Full and stable version is expected to be available at around Q4 of this year and will work from the iPad mini 2 up to the new iPad Pros.