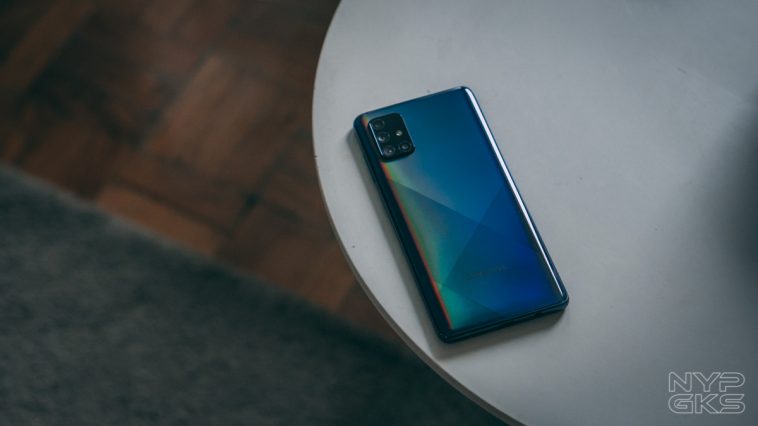 Samsung phones are known for their great cameras, and the Samsung Galaxy A71 is no exemption.

The recently-released Galaxy S20 series brags a feature-packed quad-camera setup. However, not a lot of people can easily spend Php49,999 on a smartphone. So, here’s the Samsung Galaxy A71 as an alternative.

It doesn’t have any crazy camera features — like a 100x Space Zoom — but the quad cameras on the back sure are interesting.

It is led by a 64-megapixel primary camera, with a wide f/1.8 aperture. That’s the one in the middle, adjacent to a blinding LED flash. It appears that this one is not a dual-tone flash, so it has no other use than being a flashlight.

We also have the 12-megapixel ultra-wide camera that provides a 123-degree field-of-view and has an f/2.2 aperture. That is below the primary shooter, while next to it is a 5-megapixel macro camera (f/2.4), while the one on the top is a 5-megapixel depth sensor.

Samsung didn’t bother to add a telephoto lens on the Galaxy A71. That’s forgivable since there’s an 8x digital zoom built-in. And not a lot of people actually use it, anyway.

What’s disappointing is the lack of an optical image stabilizer. We’re curious to see how it affects low-light performance and handheld video recording.

Oh, and of course, we’ll also test out its 32-megapixel selfie camera. We’re curious to see if Samsung’s move to place it in the middle actually has beneficial effects when taking selfies, or just a move to make the design unique. So, let’s start!

The 64-megapixel main camera, as expected, takes great images. The details and sharpness is top notch. The colors are more natural-looking, something that a lot of photographers would really appreciate. It gives you more flexibility in editing.

But if you’re a more casual shooter, you can enable the AI scene detection, which can add the right amount of saturation and contrast for a more vibrant, Instagram-ready image.

Probably my only big complaint about the Samsung Galaxy A71 is the large and distracting brand watermark. It’s disabled out of the box, but I know a lot of you would love to brag about the device you’re shooting photos with.

We’re seeing identical color quality on the 12-megapixel ultra-wide shooter. It looks like the Samsung Galaxy A71 is going for natural tones on this handset, which we really appreciate.

Although, we’re seeing a lot of distortion in the corners. The sides are a bit stretched-out, but that’s common in ultra-wide lenses.

The 5-megapixel camera on the Samsung Galaxy A71 lets you get close to the subject by up to 3-5cm.

This is useful if you’re into bug/insect or photography, or if you just want to really get close to small objects. The colors are not so accurate, but good enough.

The 5-megapixel depth sensor does a great job of separating the foreground to the background with great edge detection. Whether your subject is a human, object, or animals.

The Live Focus feature also allows you to adjust the blur intensity in real-time before you take the photo. It looks inaccurate in the viewfinder, but the image improves after it develops in the gallery.

Taking pictures at low-light images is not the strongest suit of the Samsung Galaxy A71. We’re seeing a lot of noises and grains. Also, Samsung could have done a better job of doing Night Mode shots.

Of course, we have the 32-megapixel selfie camera. I don’t see any benefits of the selfie camera being on the middle, other than giving the Galaxy A71 a distinctive look — separating it from other devices who have their punch-holes on the top left.

The image quality is really fine. Thanks to the high-resolution sensor, and Samsung’s move to not overuse face filters, selfies will look sharp and detailed on this thing — even in low-light scenarios.

Moreover, the Samsung Galaxy A71 can do 4K video recording. The colors are similar, with incredible sharpness.

If you want a smoother image, there’s a software video stabilization, which only works on 1080p resolution. The image looks really smooth, even in handheld while walking. You can watch the sample in our video review above to see the sample video

We also spent some time with the built-in hyperlapse mode. You can take hours of timelapse video on this thing, thanks to its large 4,500mAh battery

See also: Samsung Galaxy A71 vs Galaxy A70: What’s the difference?

Sure, the Galaxy S20 definitely has way better features than the Samsung Galaxy A71. That flagship device has a way more powerful processor, fast display, stereo speakers, and in this case — better cameras.

But as we found out, the Galaxy A71 has covered a lot of bases well. It may not have a 120Hz screen, but its 6.5-inch Super AMOLED screen is large and vibrant enough to satisfy.

It may not sport Samsung’s high-end Exynos 990 processor, but the Qualcomm Snapdragon 730G processor on this one can still handle a lot of workload and games with finesse. And if you want to know how powerful it is, you can check out the Samsung Galaxy A71’s performance in our gaming review.

And of course, there’s the cameras. It may not have a telephoto lens, but its 64-megapixel primary camera and 12-megapixel ultra-wide shooter are almost on par to what the Galaxy S20 has.