One of the most popular lines when you hear the term budget phone is the Asha line from Nokia. While debatable whether it can be termed a smartphone or not, what’s undeniable is that phones from the Asha lines exude a sense of elegance and sophistication in its design.

The 50x Series is one of the most popular lines in the Asha family, with the Asha 501 garnering good reviews. Its successor, the Nokia Asha 502, was made available to the Philippines just last week. Nokia was kind enough to supply us with a review unit. In an increasingly tech-y world, is it worth a look especially given its price?

Nokia’s Asha line uses proprietary processors, hence its absence from the specs. I couldn’t confirm the amount of ROM, but if I’ll base it on its predecessor, I’ll bet that it’s at least 128MB. Admittedly, the specs are uber modest for a phone that costs PHP 4,800.00. Curiously, it also has a smaller battery than its predecessor. In real world use, though, it really doesn’t matter.

The Nokia Asha 502 comes in the standard packaging of Nokia, which should be familiar to all by now. It’s good enough aesthetically, and it works, so there’s nuff said for that. 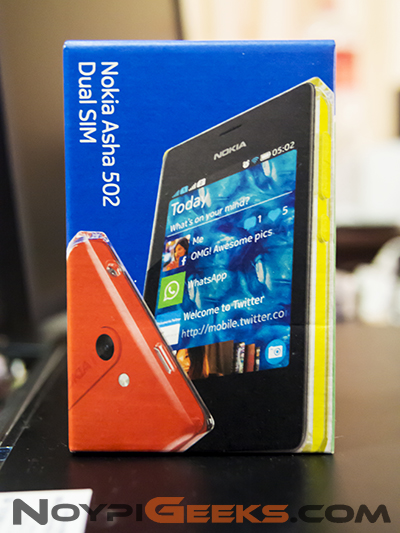 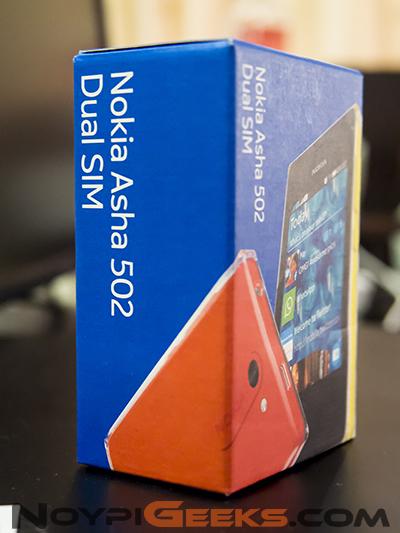 Included accessories are mostly standard fare, coming with the requisite headset, a charger, a data cable, and the manuals. However, it does come with a 4GB microSD card for your media files (I’m willing to bet it’ll mostly be audio files, though). 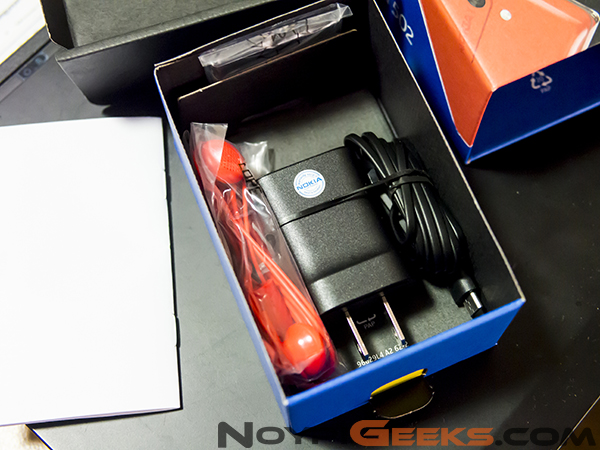 While the phone’s specs lack any semblance of an oomph, it does make up for it in spades with design. Honestly, this is the best-looking budget phone whose only contenders are phones from other Asha lines. It’s squarish and small, but for some weird reason, it works. 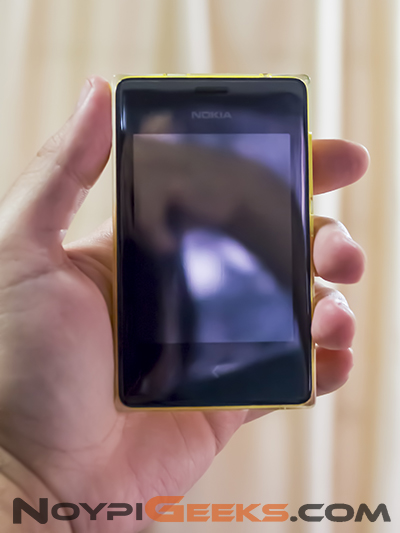 The casing is absolutely gorgeous! It’s difficult not to fall in love with it (at least my fiancee did). It’s designed in such a way that it looks like the outer shell is encased with transparent glass (actually, it’s polycarbonate). The squarish exterior may look uncomfortable to use, but it’s not. If fits snugly in the hand. In fact, I even didn’t mind that my review unit came in yellow (I would’ve preferred black, would’ve looked good in that transparent polycarbonate). It’s a bit of a fingerprint magnet, though it does look like it’s a bit tougher against scratches. It’s a good thing because this is one of those phones that you really wouldn’t want to put an external casing on, especially those atrocious and cheap jelly cases. 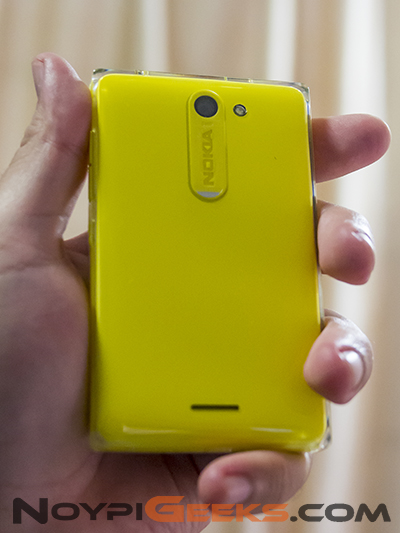 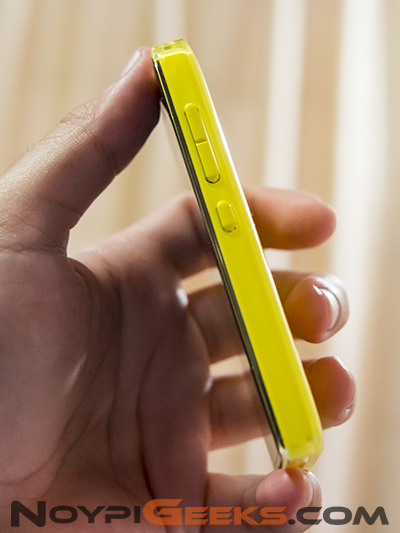 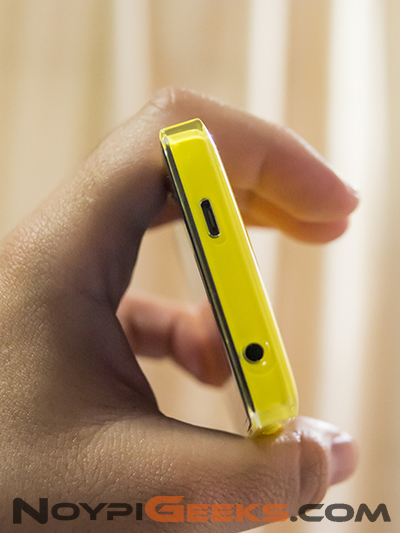 The front only has one soft button for Back. The right side houses the volume rocker and power button, while the top has the 3.5mm jack and microUSB port. The rear has the camera and flash and the speakers. Removing the back cover gives you access to the two SIM trays and the microSD port. 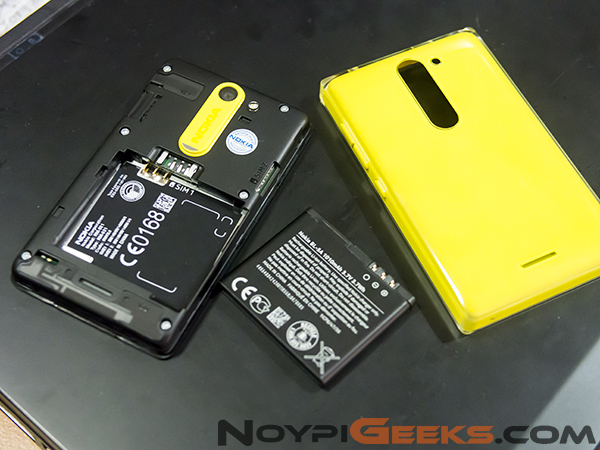 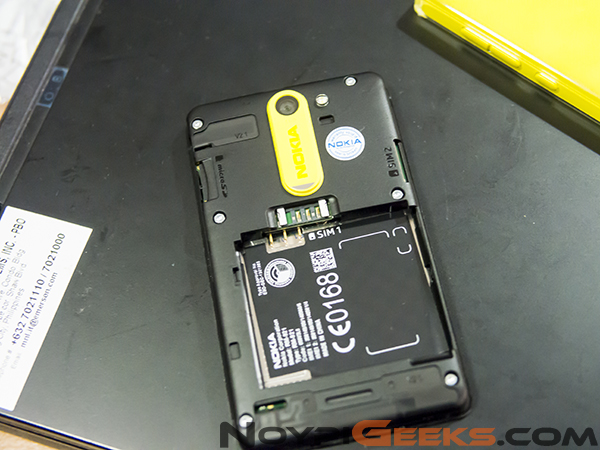 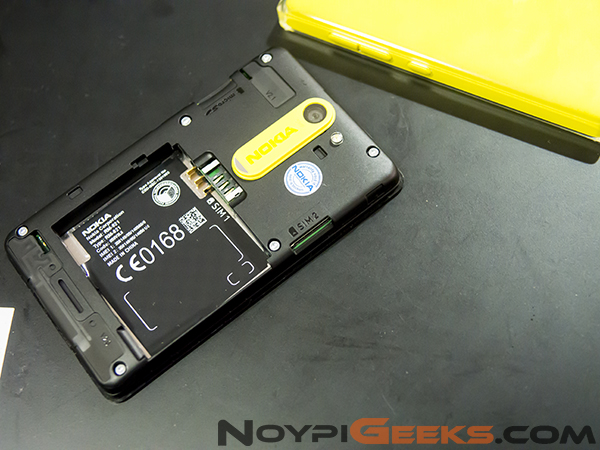 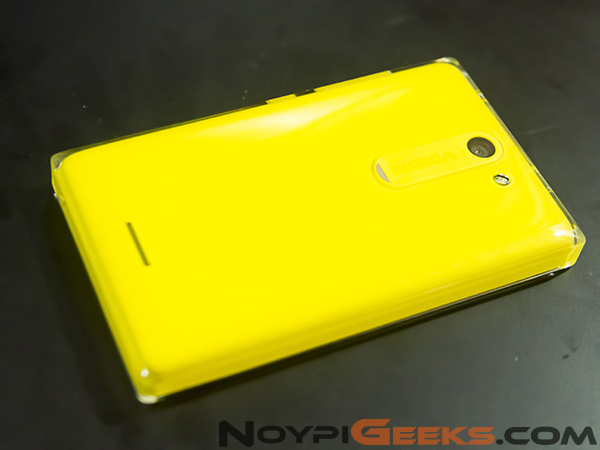 At 3″, this is the smallest screen that I’ve used in a long time. The resolution is small. That size is usually reserved for small devices such as smartwatches now, I think. so it’s surreal to find that in phones. Then again, it fits just right for a three-incher. At 256k colors, it’s really inappropriate to watch any sort of video files here, and looking at photos via that screen is like a permanent Throwback Thursday. Still, if used for basic, in-house stuff, it’s just adequate.

Touchscreen control is smooth and responsive, and you won’t have any problems using it. 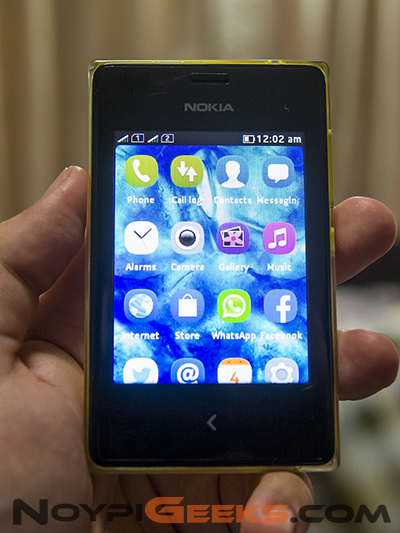 I’m skipping the other categories since there isn’t much to talk about here. The Asha family uses Nokia’s proprietary OS named Asha Touch, which is based on Nokia’s previous Symbian Series 40 OS. As such, using it is smooth and responsive. It’s also very stable. As a phone, it does very well. Audio clarity is great on good reception. Microphone also does well. I’ve also hadn’t encountered any difficulty sending text messages. It’s something you’d expect from a company that’s been at the forefront of telephony for so long, so no surprises there. The small screen does make it more difficult for me to type with it. I hate small screens. :(

As a smartphone, you’d be very disappointed, though. While technically a smartphone, there’s so much missing that I doubt you’d be using it as such. Some mainstays are present, such as Facebook, but that’s about it. Personally, I had a hard time browsing via the phone. The small screen really makes it an unpleasant experience. Then again, that may just be me.

But that may not be a non-issue for some since there are too few apps for you to use. At most, you’d be browsing through casual games, but not all are free.

However, using it as a portable MP3 player gives you a stellar performance. Camera performance is above average compared to its contemporaries (the flash drive where I kept the pictures got corrupted, so I couldn’t upload them, sorry guys :( ).

Battery life is also excellent. Given that I’m only really able to use it for calls and texts (but with WiFi always on), I’m able to use it for a couple of days with some amount of juice left before I charged it. It’d be a good companion phone, IMHO.

It’s kinda difficult to put a verdict on this phone. On one hand, it’s really not for everybody, and really not for those who are looking out for a powerhouse. At PHP 4,800.00, that’s too much to pay for what’s essentially a level higher above dumbphones . But then again, those aren’t the target of this phone.

This phone is for those who put premium on chic designs above everything else. This is for those who I daresay aren’t tech-savvy and just want a phone that works and able to do a bit more, but not too much that they’d be overwhelmed. This is even for those tech-savvy people who want a phone that can play second fiddle to their high-end device without resorting to truly dumbphones with an added bonus of using an absolute eye candy. For these people, paying PHP 4,800.00 is well worth it.

As for me, it’s not my kind of device, but I had a good time with it. And I can’t get enough of the design for some reason.