Not too long ago, I said that the Nokia Lumia 1020 is one of those few WP8 devices that make sense in purchasing if you can swallow the price. I personally use a Nokia Lumia 620, and while I do like the device, I really could no longer ignore my dislike for small screens (aside from my other caveats).

In that review, I also said that it’s best to skip that phone and go for the then-new Nokia Lumia 625 instead. I don’t know if Nokia read my mind, but they sent us that very phone for review. Yey!

As a budget phone, it’s one of those few instances when I feel that investing into the platform is worth it since you get 90% of the benefits of the platform at less than half the price of the high-end models (except for the sublime 1020, of course). Although I’ve heard that there was a price drop for the older Lumia 920, but that’s another story. So, how much better is this phone over the Nokia Lumia 620? Let’s find out.

Specs are quite decent for a budget phone, but it’s readily apparent that there are some stuff missing here that are present in the Lumia 620, such as NFC. This seems that we can’t readily say that it’s a home run against the predecessor, especially since the latter’s gone down in price significantly. I absolutely have no idea why they removed those features, and aside from that there are a couple of design choices that I find questionable (but they’re trivial, I must admit).

The Lumia 625 comes in the standard box that the rest of their phones come in. So, if you’ve bought any of their phones recently, it’d be very familiar. It’s not a bad thing, really. 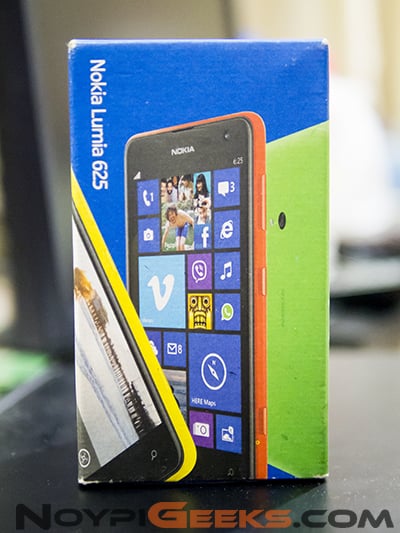 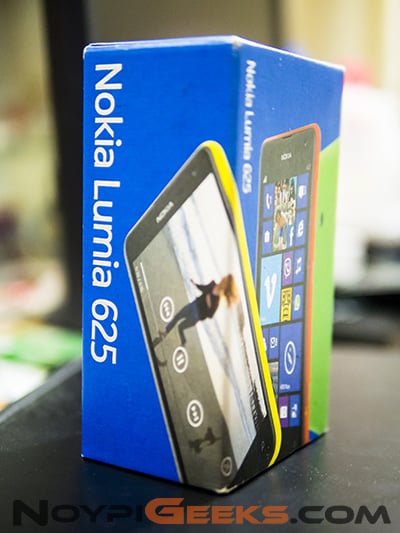 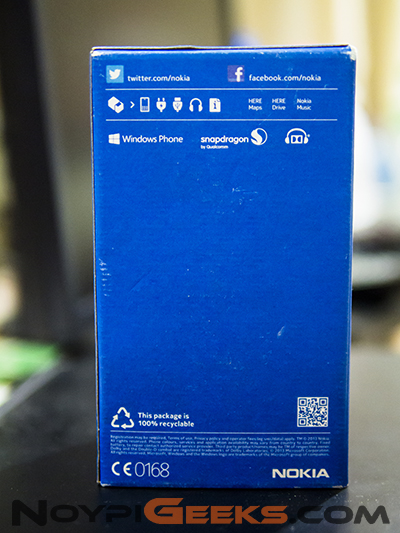 The accessories that come with it are standard fare: the requisite headset, a charger, a data cable, and the manuals. It would have been nice if they packaged a microSD card to go with the phone. It would have added more value to the purchase (it’s my caveat for all the other manufacturers that do not package microSDs). 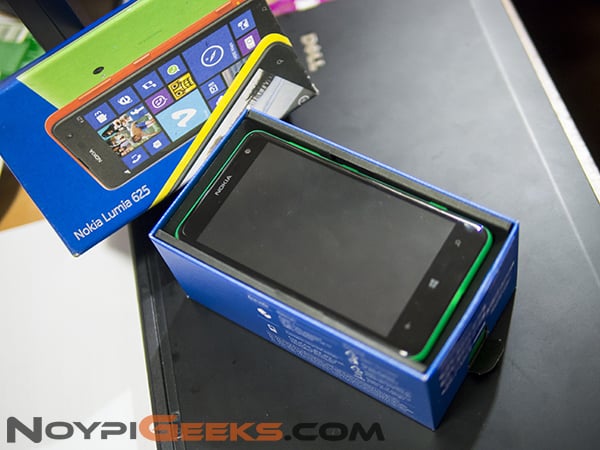 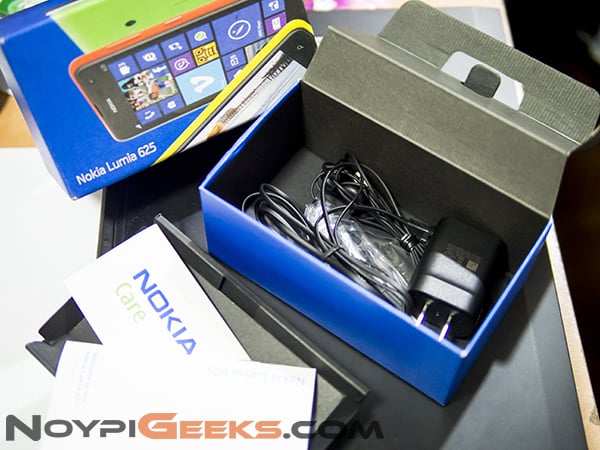 I’ve said it before and I’ll say it again: Nokia produces some of the best-looking phones ever. And what’s even better is that they even translate their immaculate phone designs to their budget phones (my fiancee uses an Asha, and even that looks stunning). Same can be said with the Nokia Lumia 625. Like the Lumia 620 before it, the back plate is removable and replaceable. My review unit came in green (although it’s also available in red, white, and black), and even though I’m not fond of that color scheme (I prefer black), the form factor is such an eye candy that it really didn’t bother me as much. The back plate is made of solid plastic. I prefer the Lumia 620’s semi-translucent back plate, but what we have here isn’t too shabby. 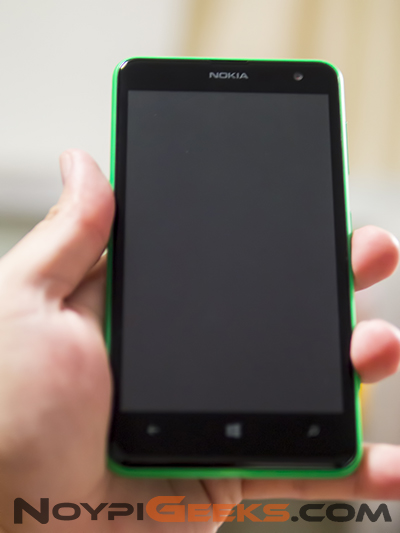 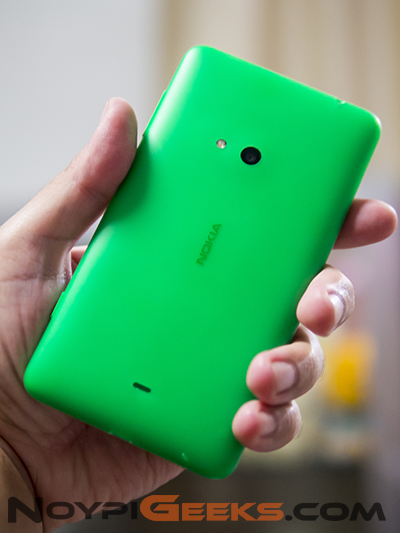 It’s thin and light and feels good in the hand. The front has the standard soft touch buttons while the rear has the camera and flash, and the loudspeaker. The right side has all the hardware buttons: the volume rocker, power button, and the camera button. The last one is one of the things I particularly wish other phones have. The top and bottom have the 3.5mm jack and microUSB port, respectively. 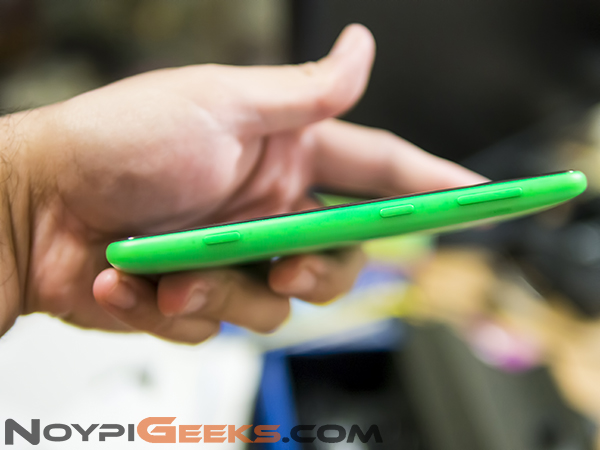 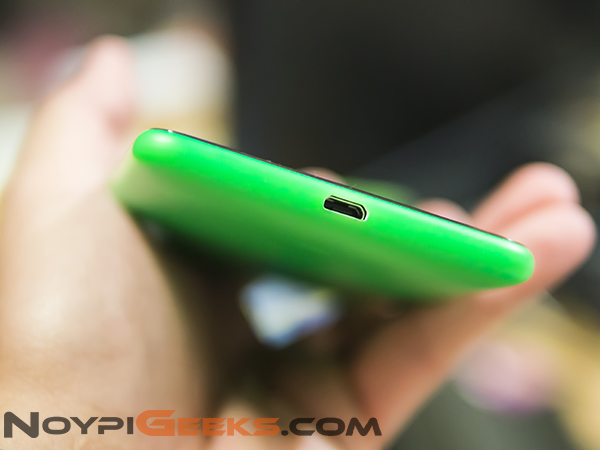 Removing the back plate gives you access to the microSD and microSIM slots. This is also where I find a questionable design choice. Unlike the Lumia 620, the 2000 mAh battery isn’t instantly accessible. it’s enveloped by a holding plate that are held by screws. So, replacing the battery is more involved. Why it’s designed that way, I really don’t know and I really don’t see the need for it. Perhaps it’s a way to avoid the battery falling off when removing/replacing the microSD card (or the microSIM). Then again, I didn’t find it a problem when doing that with my Lumia 620. I would’ve much rather have the battery more accessible so that I can pop a replacement juice up in a flash than fiddle it with screwdrivers.

However, I really do appreciate the generous screen real estate! While it has a smaller resolution for its size (WVGA resolution on a large screen is a sin IMHO), the screen is gorgeous to look at. With its capability to produce 16M colors, it simply kicks any budget phones with similar resolution to the balls. Compared to the Lumia 620, though, it does have a significantly smaller pixel density due to having a larger screen while employing the same resolution. However, it’s not bothersome and you’d have a blast interfacing with it, whether it be watching a video or playing a game.

I’ve never had problems with the touchscreen controls on the Nokia Lumia 625. I’ve experienced nothing but smooth, lag-free operation as far as touch controls are concerned.

As Nokia is a premiere hardware manufacturer for the WP8 platform, you can expect the OS to work seamlessly and optimally with the hardware. In fact, you won’t realize that it’s using what’s equivalent to budget-category hardware, which goes to show that any OS can be powerful if it’s tweaked to be optimized to its hardware (in the Android side of things, the Motorola X is in the same ballpark). It does have a slightly more powerful processor than the Lumia 620 at 1.2GHz, compared to the 1.0GHz of its predecessor.

From what I understand, though, most of the apps (if not all) for the platform are optimized to its least common denominator, so experience with one phone would be the same as another. Only specialized phones, such as the Lumia 1020 nedded higher specs, such as additional RAM for its image processing.

The 8GB storage and RAM is plenty enough for your needs since there isn’t much software that needs a lot of space. It’s another matter if you have lots of music and video files, and given Nokia’s track record for audio clarity, you’d want to use this phone to listen to your music often. Thankfully, it supports microSD, so you can just pop that in there and enjoy your media files. 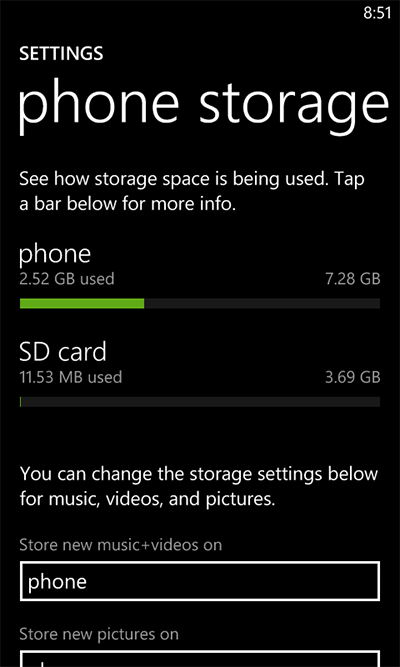 Battery life is great as well. You can easily squeeze in a couple of days’ worth of heavy calls and texts and occasional surfing with WiFi always on (now you know how I use the phone). The generous battery for the screen size does lend itself well on that regard. In fact, this also trumps the Lumia 1020 in the battery arena since I’ve also taken pictures with the phone and it didn’t suck up the battery like the 1020 did. Then again, the latter needs a monster of processes for that resolution and infinitely superior sensor than this phone so it could be an unfair comparison overall.

The absence of NFC is a bit of a downer, though, especially since its predecessor has it. While most people don’t really use it much, it’s a good way to future-proof your phone, especially since we’re seeing more accessories incorporating the technology, such as Nokia’s own upcoming BH-121 headset. You can still connect to it via the standard Bluetooth interface, though, but it much, much more convenient via NFC.

With the way the Windows Phone 8 ecosystem works, you get at least 90% experience from one phone to the next, with only a few exceptions (such as when using PureView-based phones, like the Lumia 1020). The Nokia Lumia 625 review unit I had already came with the Amber update installed, so I’m not sure whether that’s the case for the new units or not. So, it’s always good practice to check for OTA system updates when you get your new phone. As for the rest of my thought about the software, I’ll just refer you to my thoughts about Windows Phone 8, updated to reflect changes brought about by Amber.

As a phone, it does very well. Audio clarity is great on good reception. Microphone also does well. I’ve also hadn’t encountered any difficulty sending text messages. It’s something you’d expect from a company that’s been at the forefront of telephony for so long. However, I’ve ran into a few problems when trying to connect to my accounts.

One of the best features of the Amber update is that you’re now able to sync contacts and email with Gmail. Unfortunately, when setting up the phone for the first time, I get an error before being able to successfully connect. I experienced the same thing with Facebook: 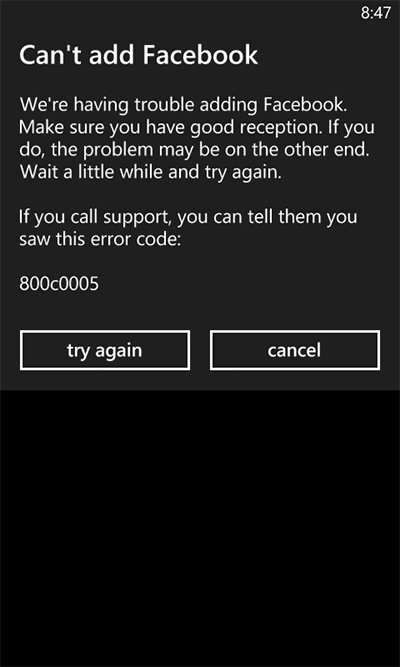 I experienced something similar with the Lumia 1020 a while back but thought nothing of it, thinking that it must’ve been a network error or something. But experiencing it again means that this bug may be inherent with the OS itself. However, once it’s able to establish connection, I had no problem with syncing. You just have to keep trying.

Nokia also makes the best sensors for their phones, surpassing even those in the iPhones and high-end Samsung devices, IMHO. And the Nokia Lumia 625, despite being a budget phone, get that premium treatment. It’s no Lumia 1020, but the image quality is great overall! Auto White Balance is spot on most of the time, and I get acceptably sharp images for its resolution. However, the phone’s exposure compensation needs a bit of work, especially when taking pictures in shaded areas. 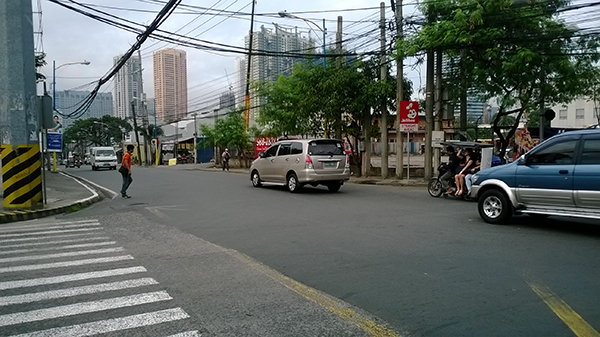 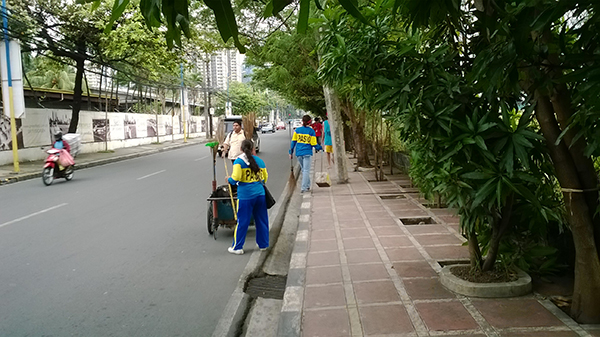 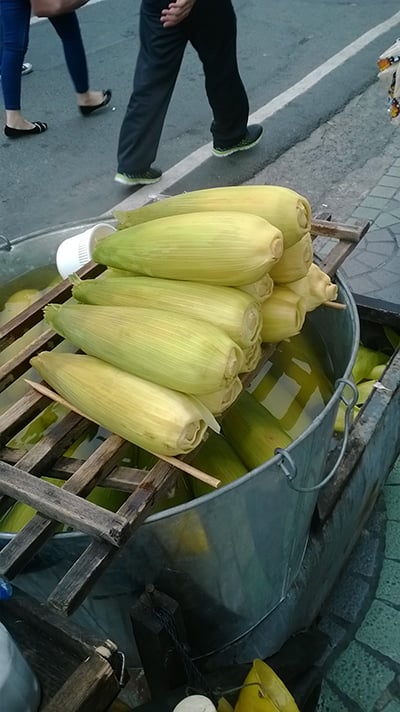 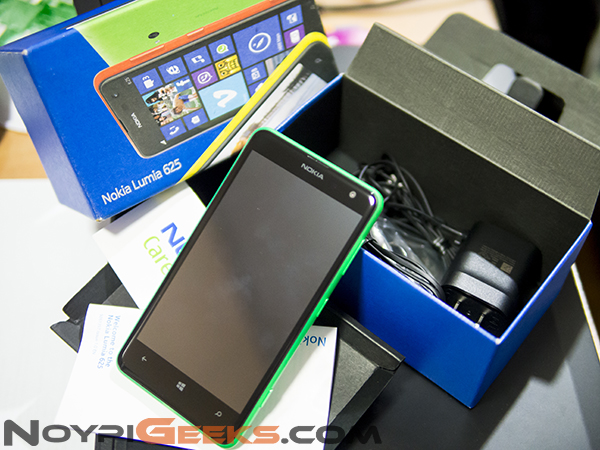 Despite some of my caveats, I like the Nokia Lumia 625 overall. While it’s a downer that they made the battery harder to access and to not include NFC, it makes up for it with some welcome upgrades, such as the bigger screen size (I can’t stress this enough). At around PHP 12,500 – PHP 13,000, it’s at a good value. It doesn’t entirely supplant its predecessor, but there’s enough goodies there to make it more sensible to buy this over that.