A couple of months ago, Nokia announced the other members of the Lumia x30 family. These phones have since been available in the Philippines early this month, and we’re glad to be able to receive review units.

Actually, we were given a copy of the rest of the x30 family, namely the Lumia 730 which I’ve reviewed not long ago, the budget-friendly Lumia 530, and the “affordable flagship” and the topic of this review, the Lumia 830. I gave high praises to the Lumia 730 since, of the three, it’s given the best price-to-performance ratio. However, I’m still intrigued by the somewhat flagship-like features of the 830 (at least on paper). I’ve used the phone for more than a week, and please read on to find out if it’s worth it. So far, the specs make it look promising.

When compared to the Lumia 730, the specs between the two aren’t really far off. If uses the same CPU and GPU, has the same RAM (albeit double the ROM), and the same battery capacity. We do get the added GPS source (Baidu), NFC. and a much better main camera. But at an added PHP 7,000 more, it’s made me pause.

The new box design is the same as what we’ve seen with the recent Lumia phones. It’s just as simple and elegant as the rest. However, unlike the previous ones I’ve reviewed, the front image does not denote the phone’s screen. Instead, the phone is shown from the rear, highlighting the PureView camera (which most likely amounts to much of the price difference between this and the Lumia 730). 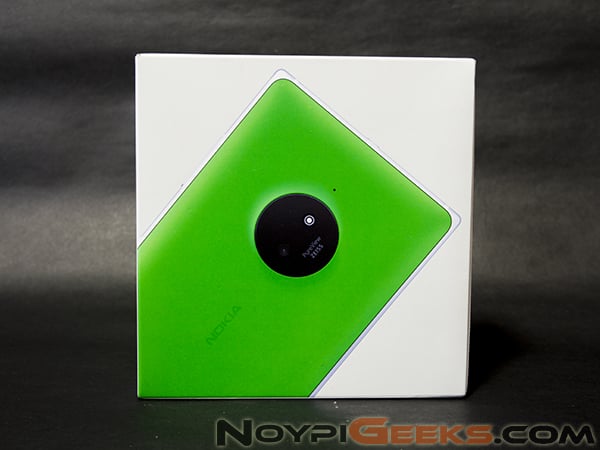 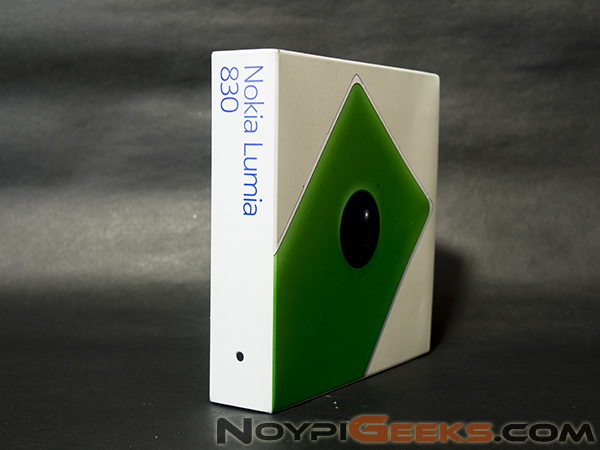 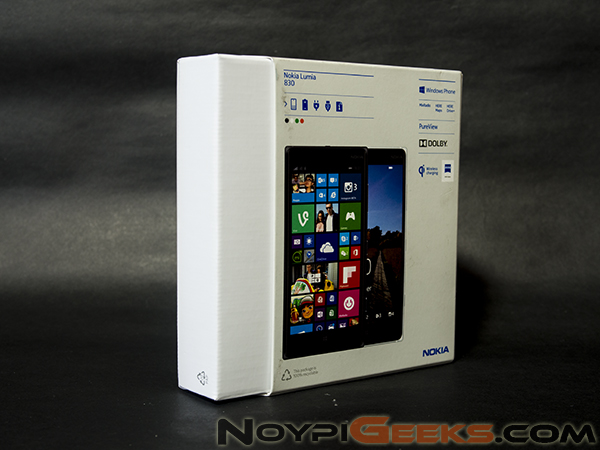 Like the Lumia 730, we get the standard number of accessories. The phone comes with the required charger, cable, and a pair of earphones. As far as accessories go, there’s nothing to write home about, although I’ve always liked Nokia’s OEM earphones, so it’s nice to have one here (I’m looking at you, Lumia 930!). 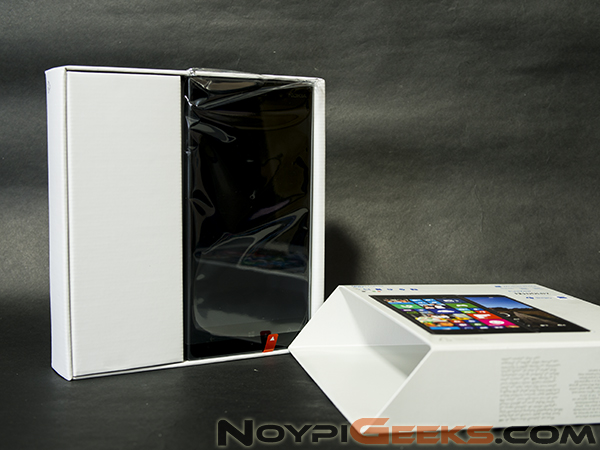 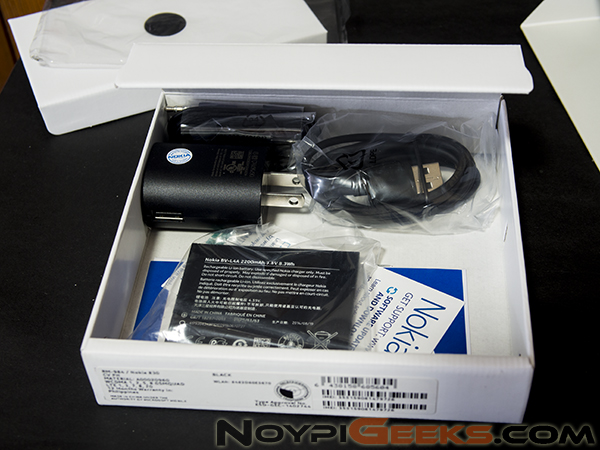 Nokia have never disappointed us when it comes to build quality, and this phone is no exception, and is one of the categories where it trumps the Lumia 730. Its outer body is more akin to the Lumia 930, masterfully fusing polycarbonate and metal into a casing that’s very classy and elegant-looking. The phone comes in orange, green, white, or black. My Nokia Lumia 830 review unit was the black version, my favorite phone color. 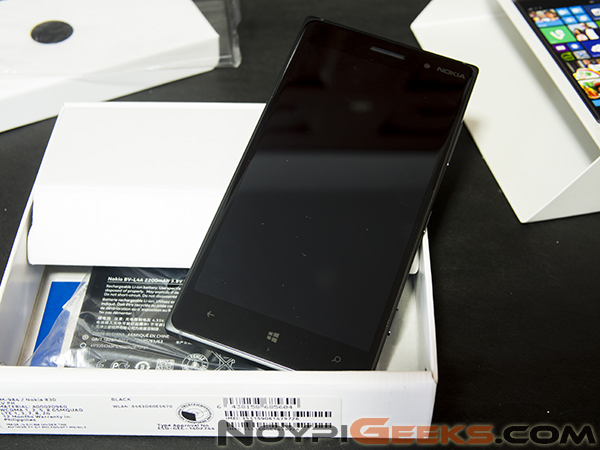 The right side of the phone has the volume rocker, power button, and unsurprisingly, a dedicated camera button. The back only has the camera, the LED flash, and speakers. For some reason, we only get a single LED flash. For a PureView-centric phone, I was hoping for a dual LED at least. 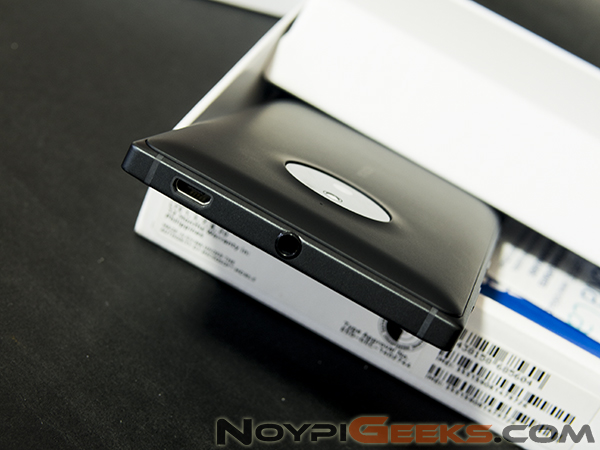 The bottom part is devoid of anything, as the top part of the phone houses both the 3.5mm jack and the microUSB port. I’m not particularly fond of this as well. I always favor my charging port to be at the bottom of the phone, though this is admittedly a very minor nitpick and isn’t a deal breaker by a longshot. 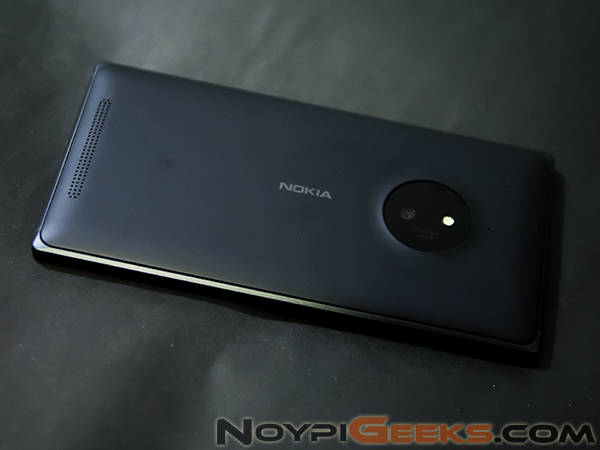 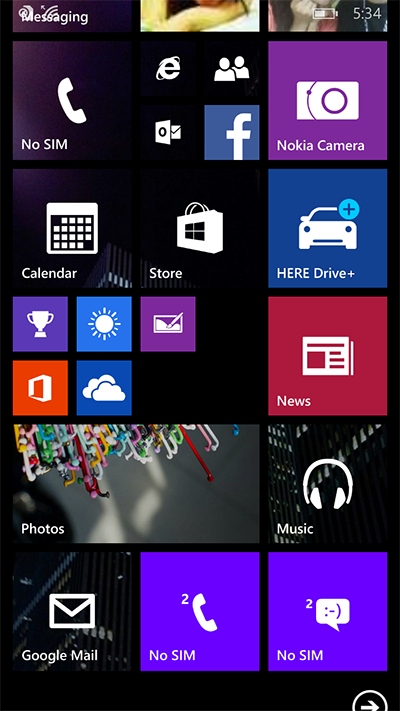 At 5.0 inches, the screen is the standard acceptable size these days, so it’s ok. With its ClearBlack technology, though, this phone’s screen is good regardless of size. It displays colors beautifully with black parts being truly black. At 720p, the screen resolution is appropriate for its size. I had no problem watching high-resolution videos, whether it be 720p or 1080p. Reading with this phone is adequate as well. I never had problems with font sizes despite the high resolution.

Touchscreen controls are expectedly responsive and as smooth as a lightsaber through a Stormtrooper. Whether it be surfing, navigating, typing, or playing games, I never experienced any lag. 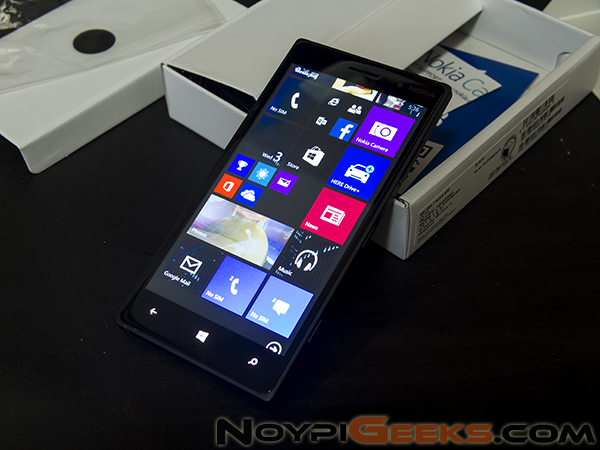 One of the platform’s key strengths is the fact that hardware and software go together for a rich, smooth experience. RAM is adequate enough despite having only half of what I’m used to. Internal memory is still ok at 16GB, although I would really like to see 32GB become the new standard, especially since we’re seeing a healthier amount of apps in the platform right now. Thankfully, this is mitigated by microSD support.

As for battery life, I found it to be good enough despite the larger screen. I’m able to get at least a couple of day’s worth of average use with the phone, f.e. always-on WiFi, average social media surfing, taking a few photos, and average calls and texts. I actually didn’t notice any difference between this and the Lumia 730’s stamina performance. As always. it took a hit when I used it as as GPS device, though, so make sure to use a car charger when using it. 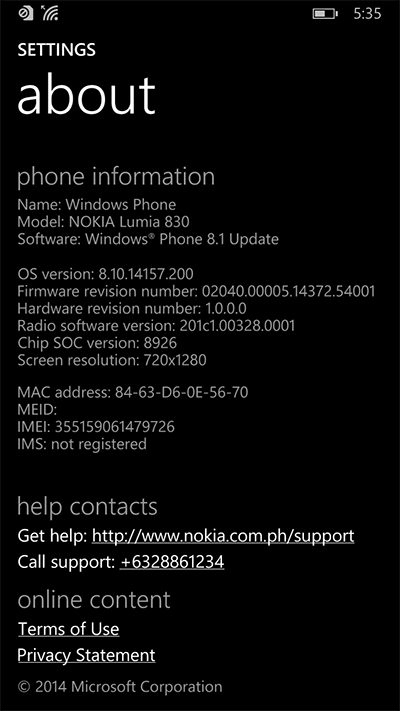 With Microsoft Windows Phone 8.1 at the helm, it performs remarkably well. In fact, I can go as far as saying that my experience with the Lumia 930, the Lumia 730, the Lumia 630 and this phone are the same 95% of the time. It means that you don’t have to shell out high-end level of money to be able to reap the platform’s benefits, fortunate because the new version of the OS is pretty solid. Even more so with this phone since the camera comes with PureView technology.

Between my time with the Lumia 930 and this phone, there hasn’t been much improvement in the apps department, which isn’t surprising since it’s just been a couple of months. It’s the platform’s main weak spot, but as I said before, the platform’s app selection is vastly improving, with majority of the high profile apps getting an equivalent in the platform. Anything from high profile games, such as Gameloft’s popular Modern Combat 4 to productivity apps, such as feedly, can be found here. Unlike the Lumia 730’s paltry internal memory capacity, this phone proved to be adequate. 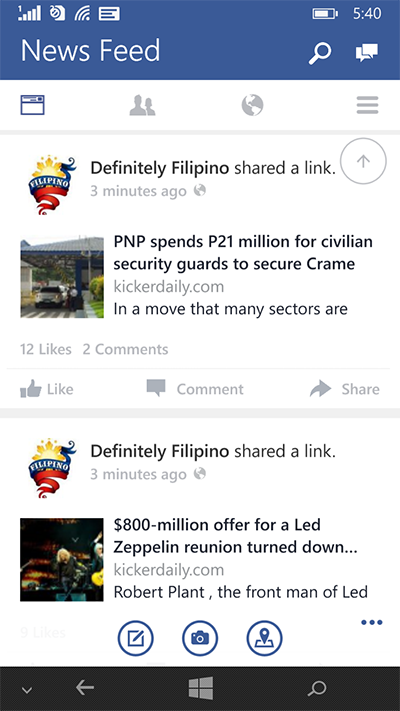 As a phone, the Lumia 830 does very well, as expected from a company that seldom disappoints in this category. Audio clarity is great, provided you have good reception. Microphone also does well. I’ve also hadn’t encountered any difficulty sending text messages. The default keyboard does remarkably well as well (which is a good thing since you can’t change it). Do note that it uses a Nano SIM. I had to buy a new SIM to be able to review this, but that’s a problem for people who constantly change phones (like reviewers), so it’s a no biggie.

As an entertainment device, Nokia Lumia 830 is great. The adequate combination of screen size and resolution make it a very pleasurable experience to watch videos in. Watching videos on it is good in short bursts (my bias towards larger screens), and audio is good as well. The speakers perform well, though I wished I can crank it up a little more. It’s fast becoming like a broken record for me, but I honestly want very good loudspeakers for my phones since I use that a lot.

With the games library slowly improving, the platform is slowly becoming a viable gaming platform. Of course, it also helps that controls run smoothly. I’ve never encountered any problems in terms of control sensitivity and overall responsiveness. I tried Real Steel this time around and it ran smoothly.

But what really made me love the phone is its camera performance, which is as it should be given that it’s a PureView camera. It worked well in both low light and ambient lighting conditions, although I’m not too fond of its auto white balance performance in low light conditions. 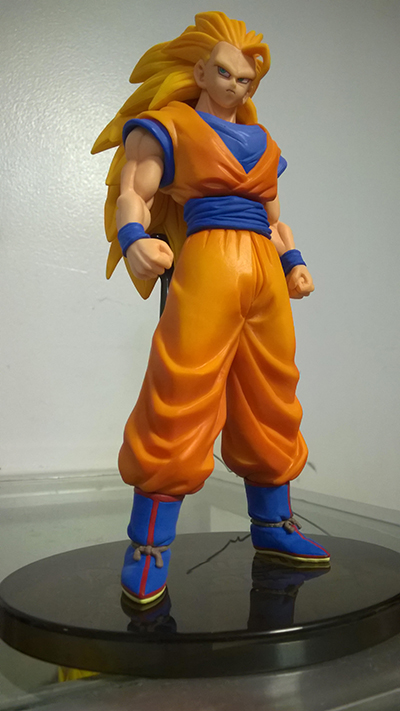 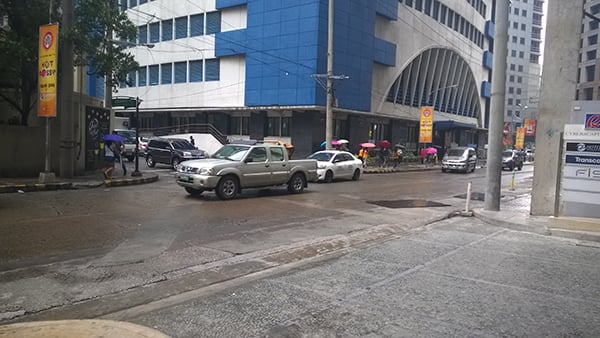 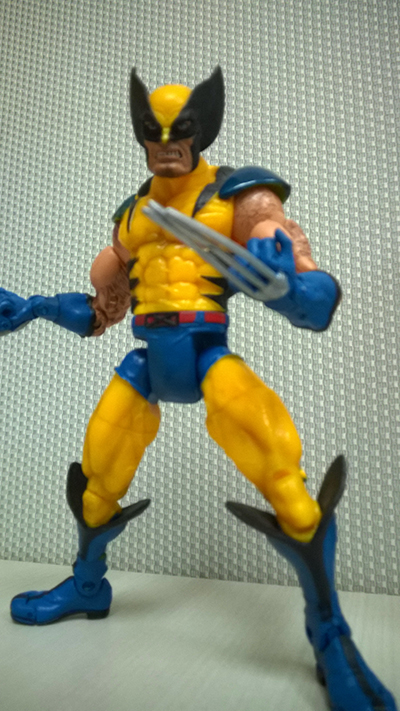 Photos taken are adequately sharp for the most part, and noise is controlled very well. 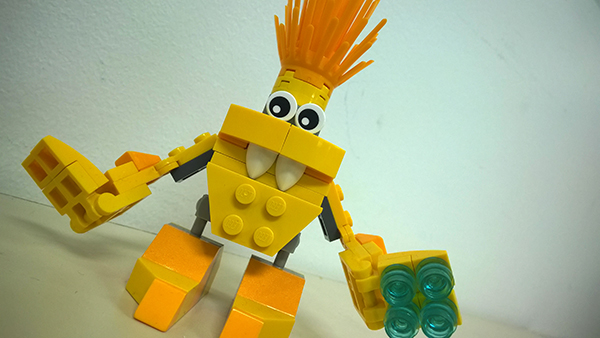 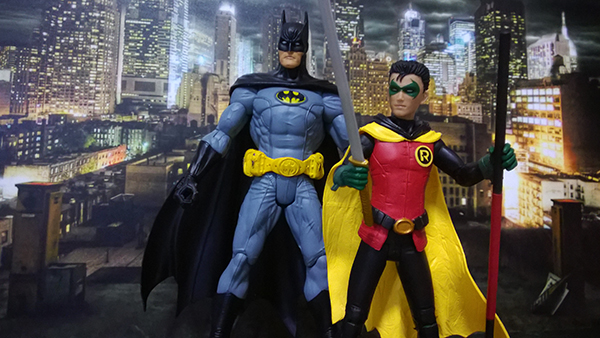 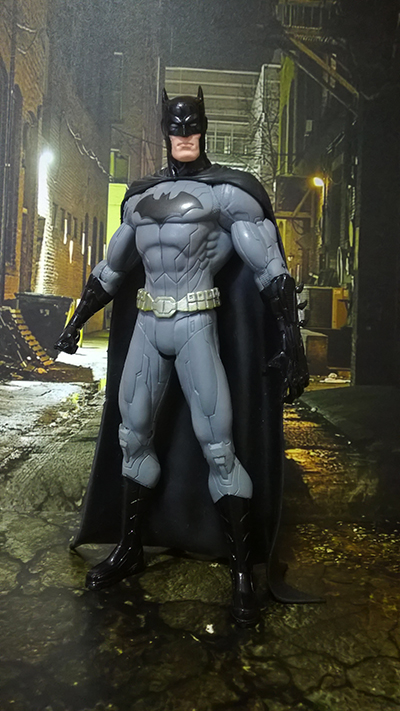 As a GPS device, it performed as well as the software that runs it. Nokia Here+ is still the King of the Hill, the gold standard by which all other offline navigation apps in ANY platform seem unable to equal, let alone surpass. For me, it’s still the single, best reason to own a Windows phone, with camera performance coming in at second place. It does eat up a lot of battery juice. Sadly, I wasn’t able to make a good comparison between a phone that’s not equipped with Baidu and this phone. However, I can say that I’m able to get fast, accurate navigation out of this phone.

Overall, I have to say that using the Nokia Lumia 830 was such an enjoyable experience. In fact, I can even readily recommend this over the Lumia 930. You get majority of the experience at a drastically more affordable price (PHP 18,990 vs PHP 29,990). You get only half the camera resolution, and a lower screen resolution, but personally, I don’t care. It’s still got microSD support, the new Baidu chip, and the other 930 advantages at a drastically lower price.

However, the tune changes when I compare it to the Lumia 730. If I were to buy a new Lumia phone, I guess my money would go to the 730 (unless I get the 830 at a huge discount). Majority of the specs are shared with that phone, and as much as I love PureView, it’s really not at the top of my priorities. However, the one thing that’s really going for it is the new Baidu chip, of which only a few of the phones come equipped right now. But at PHP 7,000 more, then that’s up for debate. However, if you are a shutterbug, then I’d actually recommend this over the Lumia 730. Camera performance is still noticeable, and IMHO, Pureview is the best camera technology for mobile devices right now. If you’re not as budget-conscious, then get this one.

That being said, I really loved this phone. If you’re invested on the WP platform, then you won’t go wrong with this phone. The price would still turn off some, which is unfortunate, but I guarantee that you won’t have regrets if ever you do buy it.