Contrary to the rumors and pre-announcement hype, the Samsung Galaxy S5 doesn’t sport a 2K display and still stays on a 1080p resolution albeit with a slightly larger screen. At 5.1 inches, the visuals on the Super AMOLED are lower in pixel density than the Galaxy S4‘s, but the difference is very negligible.

Those asking for a metal casing for a more premium feel will still be disappointed. The Samsung Galaxy S5 remains a plastic-encased handset with a new “modern glam perforated” pattern. This new design is said to feel better, more comfortable to hold, and isn’t as slippery as the previous flagship. There will be more color variants to choose from, depending on market or carrier availability: black, white, blue, and gold. 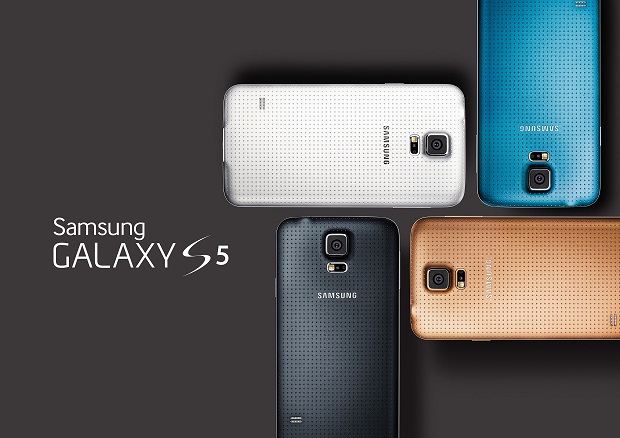 The back also comes with a more powerful shooter with 16-megapixel resolution, up from the S4’s 13MP. Perhaps the best improvement is the fast auto focus. At just 0.3 second, movement and action get into focus and users “no longer have to miss any important moments.” The HDR technology employed by the phone has also gotten better, with users now able to preview the results on the screen before taking the shots.

Samsung has incorporated new sensors to the Galaxy S5, including a heart rate monitor (located right beside the LED flash) and an integrated fingerprint scanner at the Home button, alongside the accelerometer, gyro, barometer, and RGB ambient light sensor. Taking a leaf out of the S4 Active‘s book, the Samsung Galaxy S5 is also waterproof and dust-proof. Its IP67 certification allows the devices to be submerged down to 3 feet deep for half an hour at most.

When it comes to software, the Samsung Galaxy S5 fortunately isn’t as bloated as the S4 with S Apps. Users also get to enjoy the latest Android version available, 4.4 KitKat. The reported major overhauling of the Samsung TouchWiz user interface didn’t turn out to be completely true. While there are design changes in the icons and some tweaks in a couple of effects, the change is minimal.

With all the features above, all the Samsung fans must be wondering when they can grab the Galaxy S5 and for how much. The official release date to over 150 countries is April, with pricing guessed to be around $888 unsubsidized. Exact availability and pricing information for the Philippines have not been disclosed yet.