Huawei is close on officially unveiling their newest midrange device. Dubbed as the Huawei Nova 3, this new smartphone aims to continue the company’s winning streak.

In a recent post on their Weibo page, Huawei unveiled few official promotional materials for the Huawei Nova 3. The posters reveal the device’s design and its release date.

We expect to see the handset in its full glory on July 18 when the company reveals it in Shenzhen. Also, a recent post on Huawei Philippines’ official Facebook page suggests that the Nova 3 might arrive in the country straight away after the launch in China.

As per the design, the Nova 3 looks really identical to the Huawei P20 Lite. But since this is a newer model, it will also come with a more dated hardware.

Rumors suggest that Huawei might also launch their new Kirin 710 processor by putting it on the Nova 3. The device might also come with 6GB of RAM and a variant with either 64GB or 128GB of internal storage. 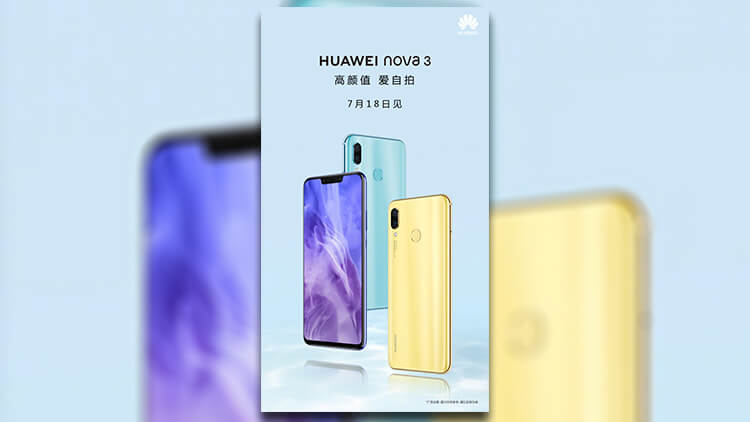 The Nova 3 is also slated to have a killer set of cameras, which is unsurprising since that has been the main focus of Huawei recently. Reports point out to a 16-megapixel + 24-megapixel dual rear cameras, which is the same configuration found on the Honor 10.

While on the front there’s another dual camera setup packed with a 24-megapixel and 2-megapixel sensors. In total, the Huawei Nova 3 will have a quad-camera configuration, much like its predecessor.

Well, that’s everything we know so far. Well have more details about this device once it gets launched on July 18th, so make sure you stay tuned for that.