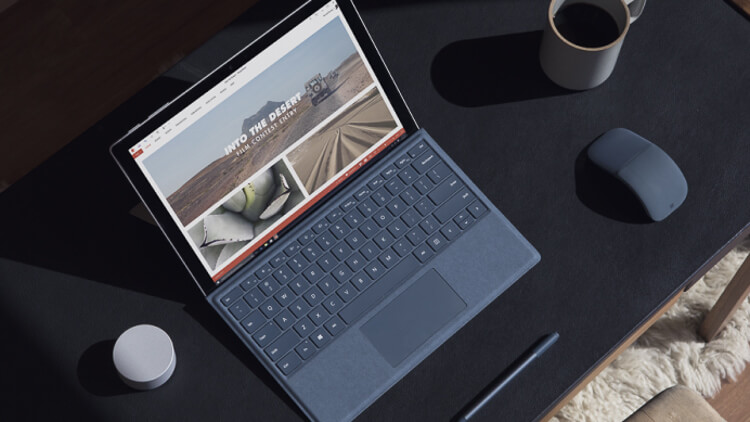 It looks like Microsoft still did release a hybrid laptop this year. Back in May, the tech giant announced the Surface Laptop together with the new Windows 10 S. Back then, people were wondering if Microsoft will still release a product for the “prosumers”. Finally, our question has been answered. Meet the new Microsoft Surface Pro 5.

Technically, Microsoft is only calling it the Surface Pro, despite being the 5th heir of the lineup. The Surface Pro succeeds the Surface Pro 4 from 2015, and came from the roots of for-creatives devices since the first generation. However, it looks like Microsoft hasn’t learned a lot from the past when they created the 2017 version.

For starters, the Microsoft Surface Pro still has the same design from its predecessor. Microsoft did refine some minor areas, but it still looks pretty much the same. Microsoft also reconfigured the kickstand, which can now go completely flat. Microsoft is calling it the Studio Mode, a feature that has been inspired from the Surface Studio. It lets you comfortably use the device as a canvass.

And speaking of canvass, Microsoft also improved the Surface Pen. It can now detect 4096 levels of pressure and tilt sensitivity. They also reduced the input lag for a more realistic feel. The stylus has been a signature feature of the Pro line, which makes it very disappointing that it is now being sold separately. If you just want to upgrade the pen of your previous generation Surface Pro, you’ll be happy to know that the new Surface Pen has backward compatibility.

Other than the Surface Pen, the Surface Dial is also compatible with this new hybrid laptop. The Surface Studio first unveiled this accessory late last year. This puck-looking accessory lets you have a more precise control over different creative tools.

Microsoft also updated the Type Cover of this new release. Just like the Surface Laptop, it also now using the new Alcantara Keyboards. The accessory has been fully wrapped in a special fabric, which is intended to make it look a bit more exquisite. Where things get really exciting is on the inside. The Microsoft Surface Pro 5 will be available with Intel 7th-Gen Kaby Lake processors (m3, i5, i7). What’s even more interesting is, the Core i5 model will be passively cooled, which means that Microsoft removed the fan for a more quiet operation.

Consumers can also get the Microsoft Surface Pro 5 with different SSD storage sizes starting from 128GB up to 1TB. There are also 4GB, 8GB, and 16GB RAM options.

The battery department received a major bump. Microsoft said that it has 13.5 hours of battery life. The substantial figures can be credited to the slightly larger battery, more efficient Kaby Lake processors and Windows 10 Creators Update.

Aside from the recycled design and the exclusion of the Surface Pen on the package, the new laptop also has an outdated I/O. It only features a full-sized USB 3.0, a microSD card reader, Surface Connect, Mini DisplayPort, and the port for the cover.

For a premium 2017 laptop, we’re expecting more than that. For one, Microsoft could have included a USB Type-C or Thunderbolt port. They could have also added one or two more USB ports. Anyway, the company has gone for simplicity and that’s not really a bad thing.