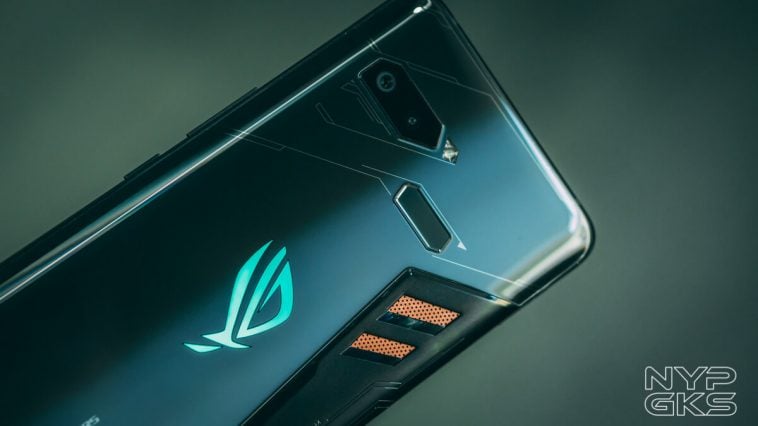 ASUS has brought the first smartphone under their Republic of Gamers brand. I was able to spend some time with it and here are my initial thoughts.

Right off the bat, I was immediately blown away with the design and build of the ASUS ROG Phone.  I think that anyone who would see it for the first time would feel the same since this device has a really unique and aggressive aesthetic. However, those who are really into minimalistic and elegant-looking devices might find the ROG Phone too much due to its diamond-cut and copper detailing, plus, the RGB-lit ASUS ROG Logo. But they can surely appreciate its ergonomic curved back and a premium 3D glass back panel.

The interesting part is, the ASUS ROG Phone features a custom interface that compliments the aesthetic of the actual hardware. The entire interface is tinted in red and copper colors that really provides a gamer-feel to it.

It even has a dynamic wallpaper which plays a cool animation when you enable the X Mode.

The X Mode will basically clear the RAM and optimize the entire system to make sure it’s in tip-top condition before you start a game. This feature can be enabled when you squeeze the device, which is identical to the EdgeSense feature on select HTC smartphones.

Speaking of gaming, the ASUS ROG Phone comes with a Game Center app pre-installed. This allows you to control the RGB lighting on the back and sync it with friends (or eSports teammates) who has the same device. The app can also adjust the fan speed of the included AeroActive Cooler accessory.

The dedicated app also lets you set different settings like the refresh on particular games. Plus, it provides a graphical information of your CPU, GPU, RAM, and Storage usage, as well as the device’s surface temperature. Now let’s talk about the actual gaming experience. And let me start by simply saying that, this thing is blazingly fast and powerful. It even dominated AnTuTu’s recent monthly top list. You can also check out some of the initial benchmark tests that we ran below.

The device’s stereo speakers, partnered with its dual smart amplifiers is also mind-blowingly good. Other than its loud volume, the sound balance is good. It can also provide good left and right separation, perfect if you’re playing shooter games like Fortnite and PUBG Mobile. Also, the two Ultrasonic AirTriggers on top acts like built-in control buttons. You can use it to quickly pull the trigger while using a gun, or as a left and right navigation while steering on games like Asphalt 8. Moreover, the device also has a Game Genie feature. It’s like a HUD that provides real-time information of your hardware usage (CPU, GPU), as well as the battery status, temperature, and an FPS count.

And since game streaming is popular these days, Game Genie also allows you to record or stream your gameplay live on select streaming services. You also have the option to capture the game sound or include your own voice using the built-in or an external microphone. Well, that’s it for now. The ASUS ROG Phone does have tons of going on with it, features that we can hopefully take a more in-depth look in our full review.

For one, we’re excited to check out the gaming accessories that ASUS has built for this device. I’m also interested how its 12-megapixel and 8-megapixel dual rear cameras perform. As you remember, one of the main issues with the Razer Phone was its camera system. Hopefully, this gaming smartphone doesn’t experience that.

With that price, the ROG Phone can go head to head against some of the most interesting Android flagships in the market today, including the recently announced Huawei Mate 20 Pro.