There’s no denying to the fact that most people love taking selfies. No matter what camera used, people are just really into it. So it’s no surprise that most smartphone manufacturers anchor their product design and marketing for it.

Selfie-oriented smartphones sprung a couple of years ago. From different international selfie-centric smartphones and even Cherry Mobile’s own Flare Selfie — it sure came a long way.

Fast forward to 2017, we’re still seeing a lot of manufacturers relying on people’s love for “selfies”. Smartphones of both OPPO and Vivo are often equipped with top-notch front-facing cameras. And once again, against all odds, Cherry Mobile will try to battle them with their new Flare S6 Selfie.

Cherry Mobile has been stepping up their design game recently. It might just be because of the influence they are getting from international brands, but we still have to hand it to them for trying.

The Cherry Mobile Flare S6 Selfie sports a unibody build. While the back panel is made of sturdy metal, the entire device itself still feels a bit flimsy. If you do a quick and simple bend, you can hear some small squeaking sounds happening inside.

Unless you really have butterfingers, the Flare S6 Selfie can last you for a long time. But that goes with any other smartphone that features either a metal or glass build. 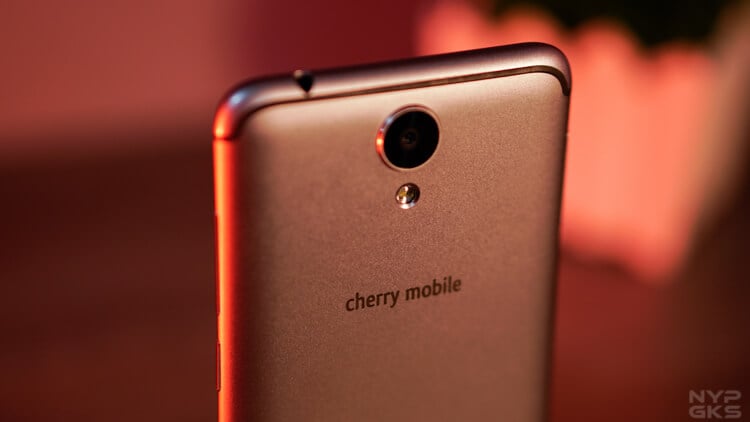 The device has this industrial look to it. The antenna bands might resemble the iPhone’s, but there’s something about how the camera is oriented and the way it’s curved all the way to the sides that makes it look a bit different.

With that said, the handset feels nice in the hands and easy to hold. It’s also impressively thin, making the camera bump at the back forgivable.

On the front, we see the 5.2-inch Full HD screen, the selfie camera and LED flash on top, while at the bottom we see the capacitive buttons and the home button/fingerprint scanner. The physical button also does feel a bit cheap. It does provide good tactility when pressed, but the button surface is a bit wobbly. 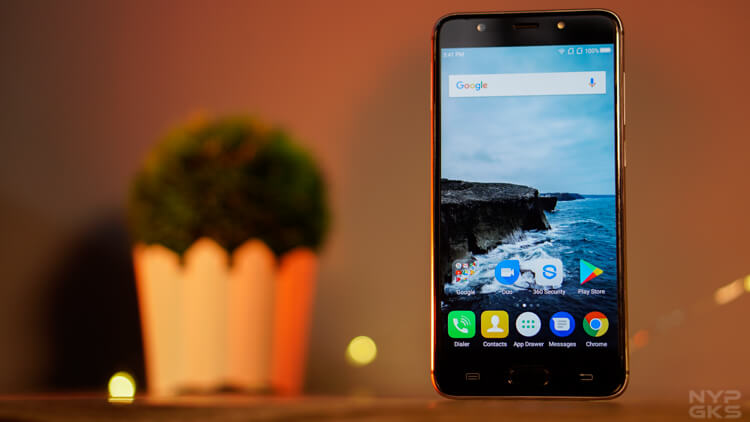 Other physical buttons include the volume controls and lock/power switch on the left side. The 3.5mm headphone jack is placed at the top.

On the left side, there’s the hybrid SIM tray. It can house two micro SIMs or have the extra slot available for a microSD card for storage expansion. At the bottom we only have the loudspeakers at the left side, sitting right next to the USB Type-C port and an extra set of grills that houses the built-in microphone.

Out of the entire Flare S6 line, it appears that the Cherry Mobile Flare S6 Selfie has the sharpest screen resolution. It has a 5.2-inch Full HD IPS screen, that’s a resolution of 1920 x 1080 that totals to approximately 424ppi. The Flare S6 Plus does have an 18:9 aspect ratio screen, but the resolution is capped at a lower 1440 x 720 pixels. The display is indeed incredibly sharp, especially for the price. Maybe just a little too sharp for its size. Texts are still readable, even when zoomed out. The images and videos also looked really detailed.

The colors are decent. When compared to other IPS screens, the colors look a bit plain and accurate. The whites are really white, with no yellow-ish shade visible. It also has wide viewing angles and a screen brightness that can still make it usable outdoors.

Compromises are needed to be done to come up with a budget-friendly smartphone. And in most cases, the audio department gets the beating. So if you’re big on listening to music, then you might want to skip the Cherry Mobile Flare S6 Selfie.

The loudspeaker outputs low-volume sound. Not unless you’re in a really quiet room, the sound coming out from it is barely audible. 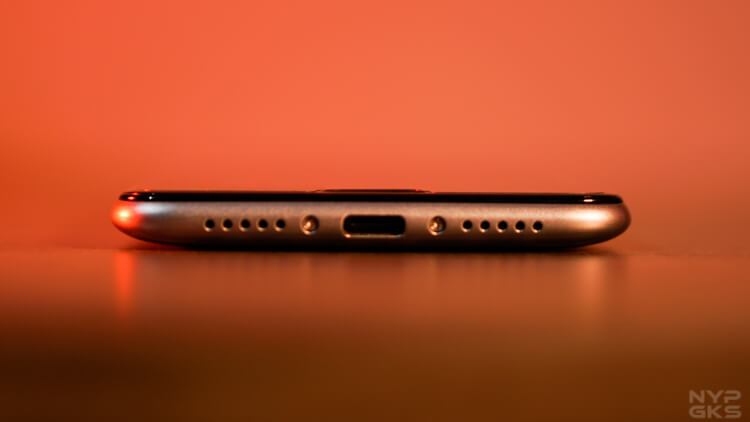 You can also experience the same hurdle when you plug in a pair of earphones on the Flare S6 Selfie. The volume is just average, making traveling with it a little hard. There’s also an Audio Enhancer feature that’s built-in on the software, but I suggest that you skip it because there’s really not much improvement. It attempts to widen the soundstage, but instead, it makes the sound really distorted. But in case there’s a need for a little more oomph, the equalizer can be turned to full blast to get more volume.

Budget price tag often comes with an entry-level chipset and it’s not different here. You’re getting a MediaTek 6750T chipset with 1.5GHz octa-core processor, 3GB of RAM, and 16GB of expandable storage.

The chipset can pretty much handle some of the finest games out today. Basic titles like Stacks and a more intensive one like NBA Live and Hitman Sniper ran at decent frame rates. However, I did notice some minor hitch from here and there. So if you’d do some intensive gaming on this thing, you might have to set your expectations properly. 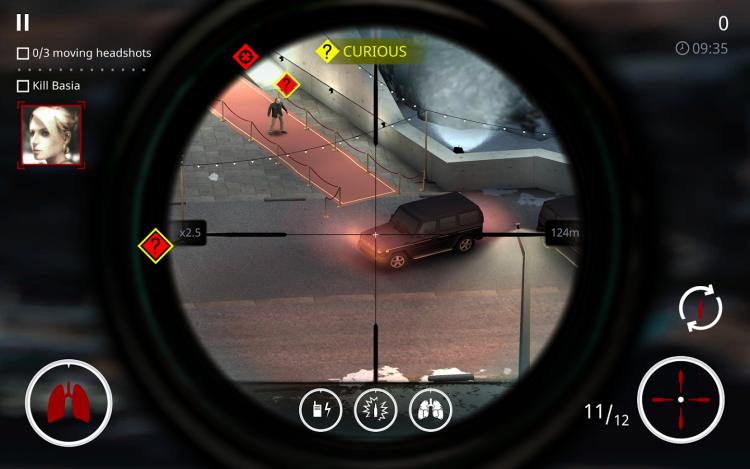 Since the Cherry Mobile Flare S6 Selfie is powering a 1080p screen, the chipset is working twice as much to accommodate it. And since the device has an all-metal build, you can really feel the heat dissipating from the back panel to your hands.

Overall performance was also decent. It’s not the best, but for the price, it will do. Social media apps, and even any other productivity and editing applications ran well. It’s not the smoothest that I have seen, but then again, it’s very good for its asking price. 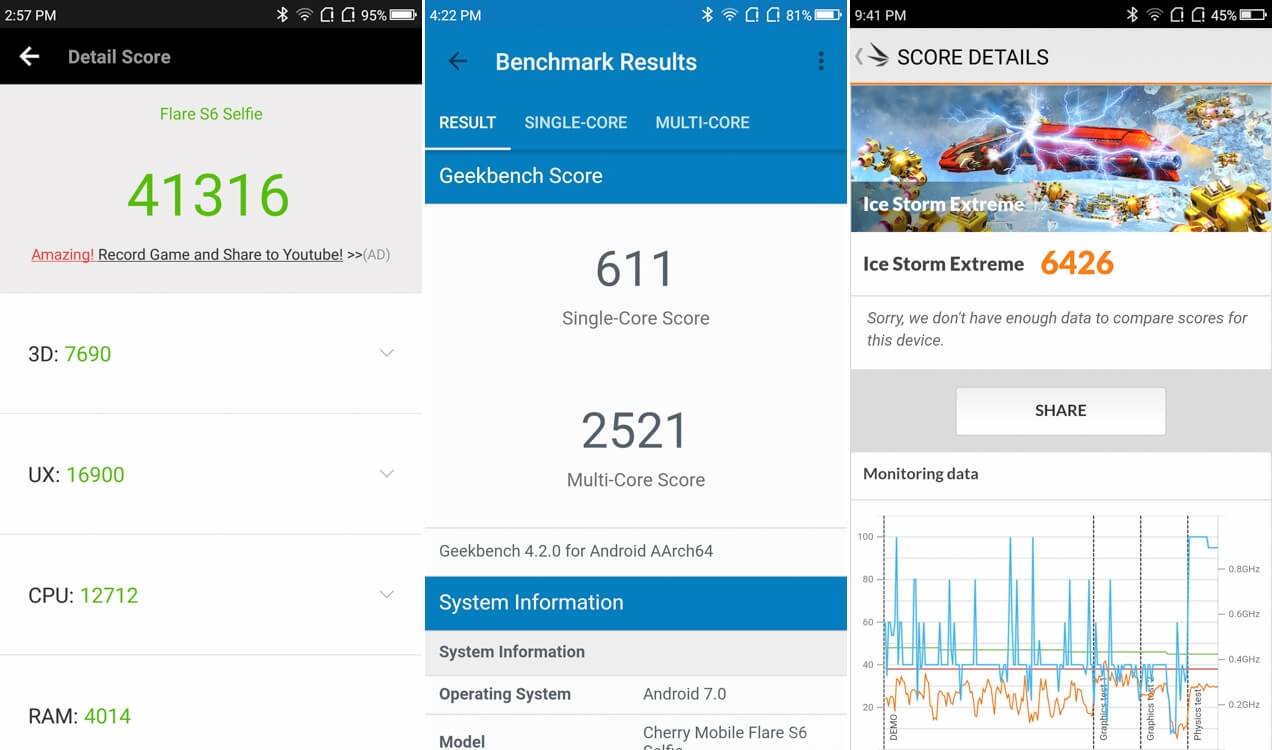 The Cherry Mobile Flare S6 Selfie is one of the first few devices to run on the company’s own Cherry OS interface. Backed with Android 7.0 Nougat, the device’s UI isn’t as bad as what most people expected.

During the course of our review, the device already had two software updates. They were mostly just for bug fixes and further optimization, which is really expected considering that it’s quite new. It’s kinda surprising, to be honest, and I’d like to commend Cherry Mobile for keeping tabs on the software to make sure it’s running well. 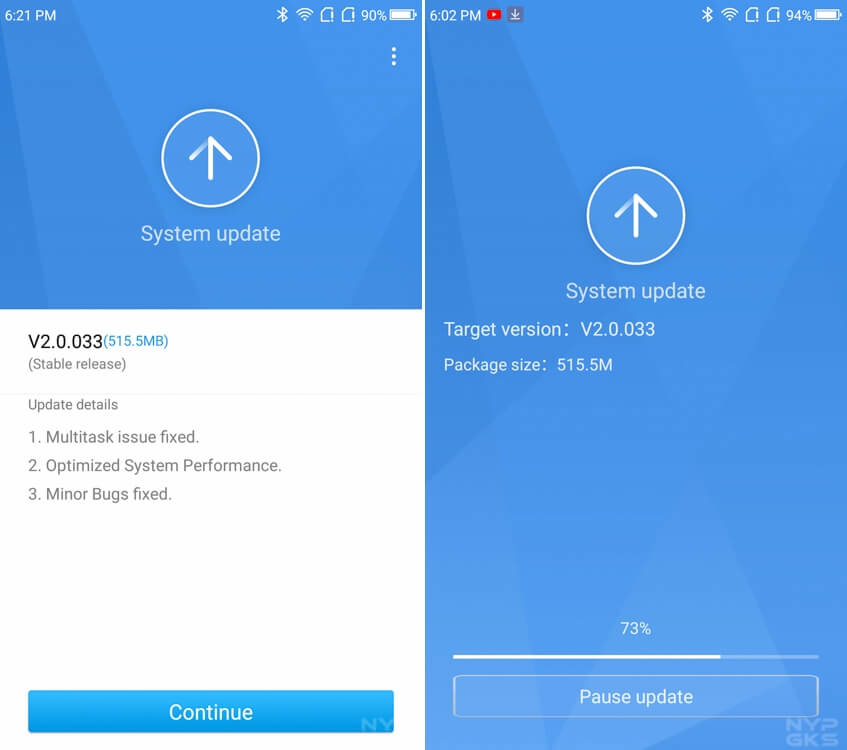 The Cherry OS feels very familiar and homey. The company didn’t go far away from Android’s look — just some minor additions to the feature section, plus other alterations on the design.

Besides the striking stock wallpaper, the design change goes to the app icons, control center buttons, and the even the Search menu bar. Swiping down reveals the Control Center while swiping up reveals the Search bar. 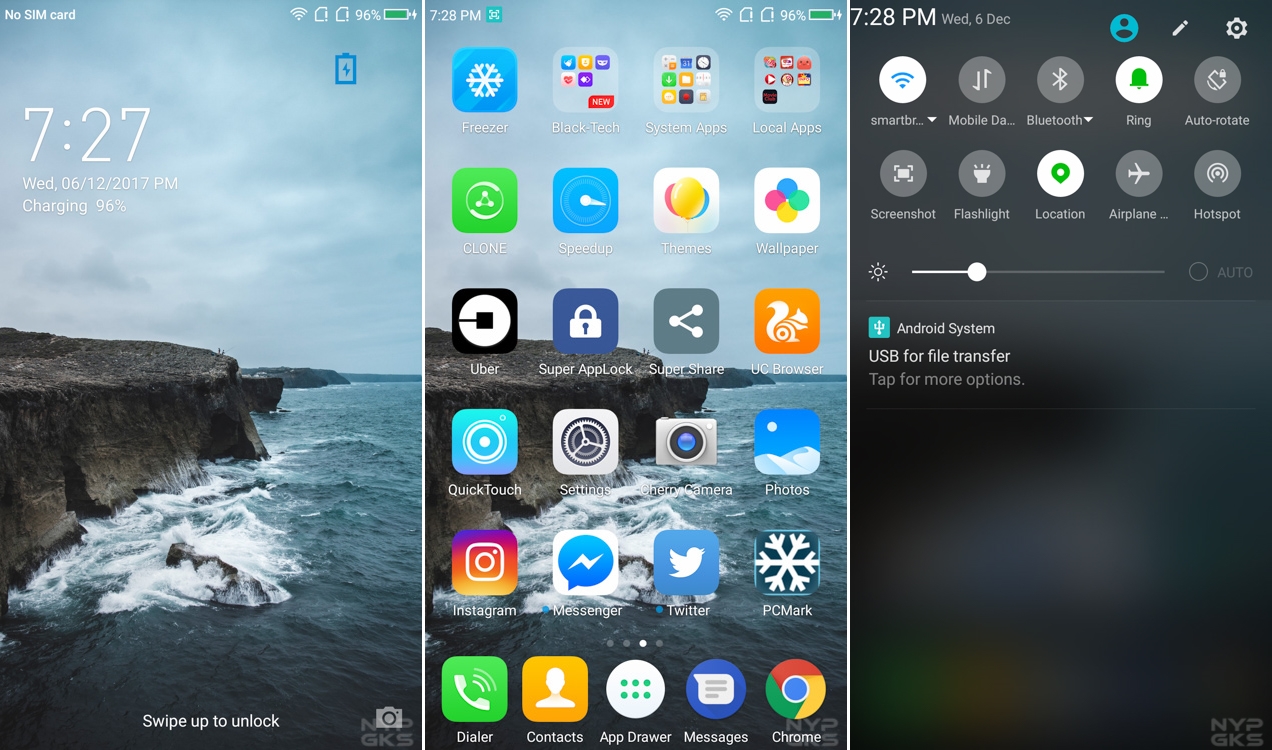 But other than those visible differences, the entire interface still looks and feels like stock Android. The settings menu looks the same, the lock screen is identical to stock Android, and the App Drawer was organized alphabetically. 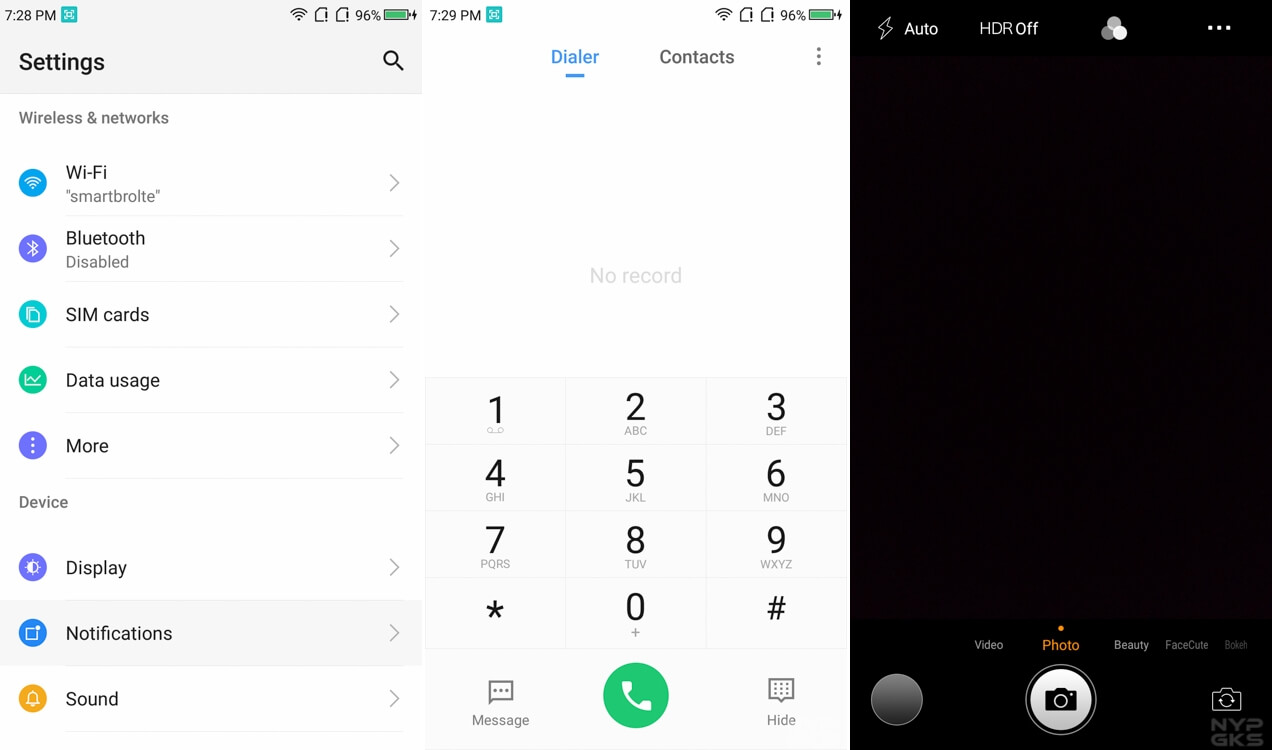 The new Cherry OS is off to a good start. Hopefully, Cherry Mobile can finally cope up with updates this time.

And lastly, it would be really nice if Cherry Mobile would disable those random pop-up ads. It’s as if you got the device for free to deserve these distractions and advertisements. But perhaps its one of the compromises to achieve this low retail price? 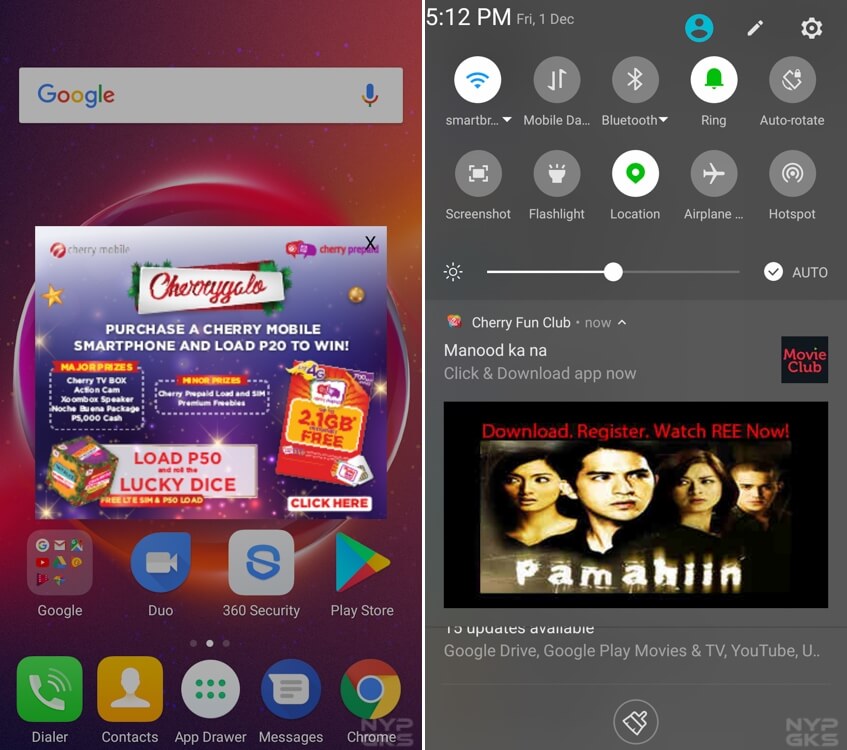 As expected, the Cherry Mobile Flare S6 Selfie has a spec-ed out front-facing camera. What we’re seeing here is a 16-megapixel Samsung camera on the front. While the same sensor is also being used at the back. 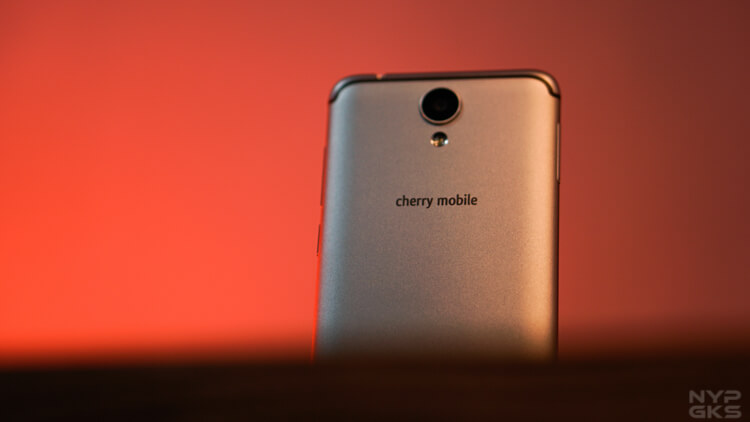 The camera on the front of the Cherry Mobile Flare S6 Selfie can take good selfies and groufies. The 16-megapixel sensor handles the details really well. It does appear a little smoother when zoomed in, but it’s barely noticeable anyway. And for social media posting, it’s more than enough.

The colors also look natural, while the contrast and exposure are acceptable. The FaceCute feature also works well, despite the cheesy name. It packs tons of face filters built-in, which adds some cool effects to your selfies without needing a third-party app.

Of course, it also features a Beauty mode. The app can indeed smoothen your skin, but in return, the entire image will lose a lot of details and loosens a lot of sharpness. The Beauty mode can also detect your gender and age. During my tests, it indeed detected my gender right, but it did suggest that I’m 27 years old, when in fact I’m only 23.

And since the rear camera uses the same sensor, the image quality is pretty much the same. The images have good colors and contrast, all of which are worth sharing online.

Also, just like most devices today, the camera of the Flare S6 Selfie features a Bokeh mode feature. But unlike the others, the shallow depth-of-field effect really look synthetic. The separation of the foreground from the background is pretty awful, with the usual cut-out look to it.

Other than Android’s native camera app, the Cherry OS also has its own counterpart. The app feels a bit janky. The interface is decent, but the responsiveness is pretty bad. So I do suggest you stay away from it and let Cherry Mobile do the cleaning first.

The Cherry Mobile Flare S6 Selfie comes with a slew of wireless connectivity. The 4G LTE is already a standard in devices like this on the market. Network connectivity was pretty reliable. If your location and SIM card support it, the internet connection can be really speedy.

There’s also WiFi a/b/g/n and Bluetooth 4.1 inside. I didn’t notice any signal loss or any hurdles during my time with it, so its working as it should.

Cherry Mobile also used the USB Type-C implementation on this thing, just like what they are now doing on some of their flagship devices like the Flare Infinity. 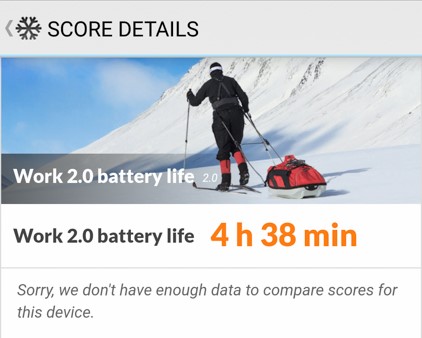 As per PCMark’s battery test, the device only had a screen-on time of around 4 hours and 30 minutes. For a perspective, other competing devices like the Vivo Y55s had a score of almost 8 hours.  But that was due to its relatively lower resolution display and an underpowered processor.

Clearly, the battery department isn’t the Flare S6 Selfie’s strongest suit. However, it can last for an entire day with conservative usage. The longest screen-on time I was able to get was around 4 hours, which is still decent considering I use smartphones a lot.

The Flare S6 Selfie is one of those devices that shows Cherry Mobile can really up their game. The company is known for their budget-friendly handset, and the Flare S6 line still goes by that philosophy.

Cherry Mobile crammed everything they can for an economical device like this. But still, the limitations caused by the asking price is still evident. 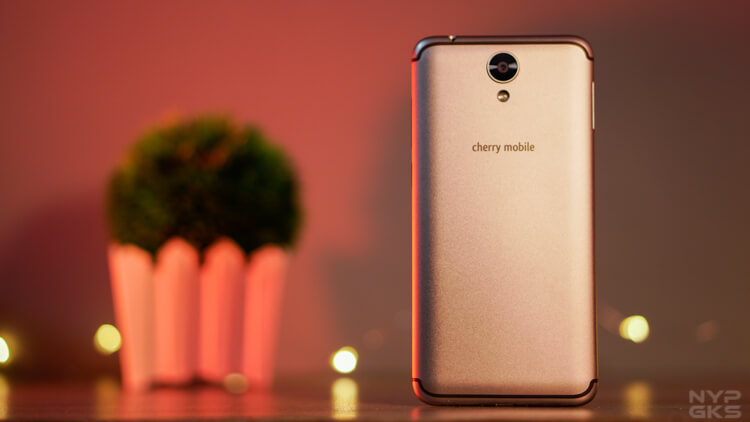 The device packs an impressive, high-resolution screen with an octa-core processor that did its best to back it up. But on the downside, the battery department took a lot of beating.

Cherry Mobile‘s move to use their own interface might not be a step in the right direction, but it proves that the company is on top of things by providing software updates.

And of course, the front-facing camera has also done its part to live up to its name. The shooter at the back is no nonsense either.