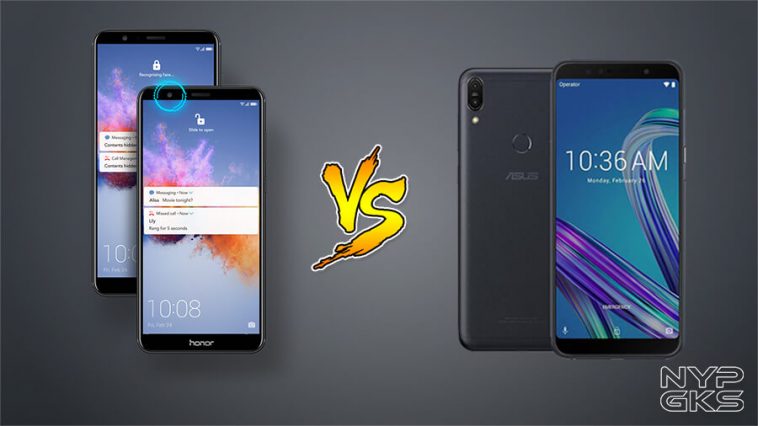 The Honor 7X is one of the company’s first devices to arrive in the country. Since they are still starting to build up a name here in the Philippines, Honor has a lot of things to prove.

This also means that the company needs to prove that their offerings are more worthy than the other competing devices in the industry. The Honor 7X  has a long list of competition, but today we’ll be focusing on one of its possible archenemy — the ASUS Zenfone Max Pro M1.

ASUS is yet to launch this device here in the country. But judging by its official price in India, the Zenfone Max Pro M1 will most likely go against the Honor 7X in terms of both price and specs. So the question is, can Honor’s offering take on ASUS’s? Go on and read our Honor 7X versus ASUS Zenfone Max Pro M1 specifications and features comparison to find the answer to that question. The ASUS Zenfone Max Pro M1 has a landslide win on this one, which some of you might have already figured just by the name itself. But for those who are not familiar, ASUS’ “Max” smartphones are known for their pumped-up specs — especially in the battery department.

The Zenfone Max Pro M1 has a large 5000mAh battery, while the latter only has 3340mAh capacity. The Honor 7X’s battery is actually not so bad for a day of use, but the one found on the Max Pro M1 can easily last for two days.

Moreover, ASUS’s handset also is being powered by a Qualcomm Snapdragon 636 processor, which is relatively faster and more powerful than the Kirin 659 chipset on the Honor 7X. The Honor 7X comes with a 4GB of RAM and 64GB of storage. On the other hand, the Zenfone Pro M1 comes in three flavors: 3GB/32GB, 4GB/64GB, and 6GB/64GB — this gives you more flexibility on picking the right memory and storage for you.

But in the camera department, the scores might be a mixed bag. Since we’re comparing it with the 4GB model, the Max Pro M1 has the same 8-megapixel selfie shooter with the 7X. Both front cameras are also used for their facial unlock feature. However, the 7X’s 16-megapixel + primary rear camera is much better than the  13-megapixel one that the Max Pro M1. Although, Honor 7X’s secondary rear shooter is only 2-megapixels, while the latter has a 5-megapixel sensor.

Overall, the ASUS Zenfone Max Pro M1 wins this fight — at least on paper. Let’s just wait and see how ASUS will price this smartphone. If it will come at a price of Php15k and above, that would be understandable. But then, since will now be out of your budget. Which can make the Honor 7X steal the crown in this battle.