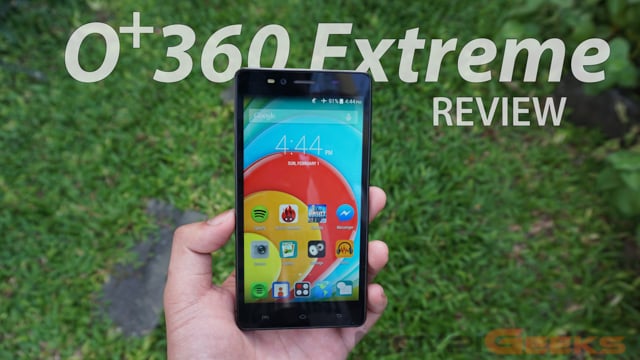 It wasn’t long time ago when O+ introduced the 360 technology. It was then incorporated to their first device, the O+ 360. And just after a number of weeks, here they are again with the follow-up from the initial device, the O+ 360 Extreme.

The O+ 360 Extreme offers a more compelling spec sheet than its smaller brother. Thus, it also makes it more pricey than the latter. From the looks of it, this is O+ USA’s current flagship device right after the O+ Air. But even though they’re quite similar in specifications, the Extreme seperates itself with the inclusion of the 360 touch technology.

Unlike with their first attempt on the O+ 360, O+’s design take on this one is on the premium side. The device is sandwiched with a glass-looking material, front and back. I say glass-looking as it doesn’t really look and feels like real industrial glass, it even feels just like plastic. It has its pros thought, the device has the Xperia-look, without the Xperia’s weight. Plastic is still more lightweight than real glass and it’s more durable, too.

The sides are made with plastic, with rounded edges. Painted in gray, there are also a vertical line accent on both sides, a aesthetic touch that became a trend to today’s devices.

Taking a tour, we got a 5.5-inch display at the top, the capacitive buttons, earpiece, proximity and ambient light sensors, 8MP front-facing camera, and a novel front-facing LED flash. The left side has all the sim-card slot and the microSD card slot, expandable for up to 32GB. Unfortunately, it can only house one sim-card, so no dual-sim capability. The right side has the volume controls, beneath the lock/power switch. 3.5mm headphone jack at the top, microUSB port and the built-in microphone at the bottom. 13-megapixel primary camera at the back, together with the loudspeaker, the 360-feature illustration, which instructs where the feature can be controlled. The device obviously has a fine-looking and ergonomic design due to the use of glass-like plastic material. But, there are some drawbacks in using plastic as a material. The device doesn’t feel solidly built. The buttons are a little feeble, it wobbles easily.

Just like what I have talked about the O+ 360 review, controller mechanisms placed at the back panel isn’t something new on the industry today, LG started it, but on O+’s 360s’ it’s not a literal back touch/display panel or a physical button. The 360 feature uses a technology that’s identical to laptops’ touchpad, which detects taps and swipes.

The feature is perfect for one-handed operation. The feature caters all the swiping and tapping that you would normally do on the actual display. I found that doing these gestures at the back of the device compared at the front is more convenient. Although, if you’re not fond of this feature, you might want to turn it off as it always detects physical contact even you’re not intentionally using it. The result? Annoying sudden display movements.

O+ 360 Extreme uses a 5.5″ IPS display, with 720 x 1280 resolution, and has 265 pixels-per-inch. The screen quality is just pretty mediocre. The contrast ratio is a bit a low down and the saturation is uninspiring. The size is perfect for viewing, but the lack of vibrancy is something that disappoints.

Nevertheless, sunlight legibility is remarkable plus, it also has wide viewing angles. The processor also entails some advanced features to deliver impressive and stunning video playback. Any clips played are being ran on a 60fps-feel.

There’s a 1.7GHz MediaTek octa-core processor (MTK MT6592) that’s running this device, with 2GB of RAM and a Mali-450MP GPU. As what you might expect, the processing performance is good. Applications’ start-up time is fast, flawless multi-tasking, and playing games are a breeze. Although, I have noticed some jerks and jitters when browsing/scrolling up and down the menu or any other application.

Nevertheless, the device can sure keep up with your day-to-day busy work life. Check out some of the benchmarking tests that I have ran for a perspective.

The 13-megapixel primary camera takes some inspiring photos. From outdoor shots to even indoors with low-light scenarios, this thing really nails it. Without touching or adjusting the settings, the 360 Extreme can snap photos with the right contrast and well-balanced saturation, which results to a proper color reproduction. The 8-megapixel front-facing camera also took home the bacon. It can take a impressive selfies, even indoors or at low-light places. But, say, you’re at a club or on a party, which doesn’t have a decent and stable source of light, there’s a front-facing LED flash to give you a helping hand to take those selfie snaps. The device is running on Android 4.4.2 Kitkat, a software version that’s typical to local devices today. It may not be the latest, but the impressive user-experience that we came to know is still there. Everything feels more fluid and snappy, in contrast to other devices that has been crammed with a third-party UI, say, Samsung’s TouchWiz, which has bulky animations and unwanted, pre-installed applications that results to some sluggish and bumpy performance. That said, you can have a full stock-Android experience from this one. Although, there are some pre-loaded applications on this one; iWant Stars, iWant TV, and O+ Air Share are some. If you find those applications useless, you may easily uninstall all of them, except the applications from the manufacturer itself. I’ve tried our favorite games like the Modern Combat 4, GTA San Andreas, Leo’s Fortune, Real Racing and they all ran very well. There are rare cases that we experienced some frame drops on MC4 and GTA but they’re not that noticeable and not something that hinders the entire gameplay. Overall, I would say that O+ 360 Extreme is a very good smartphone for gaming.

The O+ 360 Extreme packs a 2400mAh power battery inside. With that, the device was able to last for an impressive amount of time. I tried using the device with the O+ Tag (read our review of O+ Time and Tag here)connected the whole time, and the device lasted for almost 24-hours. Heavy and uninterrupted usage gave a screen-on time of 5 hours. The battery longevity is pretty remarkable if you ask me, as other devices usually last for only 3 to 4 hours of continuous usage. Despite the low capacity, the Extreme was able to please us with its performance.

For what it’s worth, the O+ 360 extreme delivers what it’s expected to: large display, beautiful body, camera novelties, and battery longevity. Although, the flimsy built quality nad the lackluster display quality may not appeal to some, this device is still a real entertainment powerhouse through and through. If you find this one appealing, check it out in stores. For every purchase of the O+ 360 Extreme, it comes bundled with the O+ Tag. Get yours for Php12,995.