O+ is really pushing their very own 360  technology in the market with the release of the O+ 360 HD, the fourth device on this line-up in just less than a year. The 360 technology uses a sensor that’s situated at the back, which can recognize swiping and tapping, gestures that are also being done on the device’s display.

On this particular device, the company wants you to “Capture Moments in HD” by incorporating an 8-megapixel primary camera and a 5-megamixel front-facing one. Which is, by the way, both sports an LED flash (yup, even the front-facing camera has a flash.)

But, will the device be able to survive in this already saturated market? That’s what we’re about to find out.

The aesthetics of the O+ 360 HD isn’t something too far away from its brothers. Keeping in mind its price tag. The device is constructed with plastic, and feels like what plastic really feels like. Good thing it stil retains the matte finish from its predecessor which makes it a bit nicer to hold.

Although, the use of plastic made the device’s weight very light. The 360 HD is also impressively thin. The ergonomics on this one is really good. But just like other O+ Android smartphones, it’s really well-built and sturdy quality wise.

At the front we got a 5″ HD IPS display, earpiece, 5-megapixel front-facing camera, and of course, a front-facing LED flash. Unlike the usual O+ device we’ve seen, this device utilizes on-screen buttons, rather than the traditional capacitive buttons below the screen. 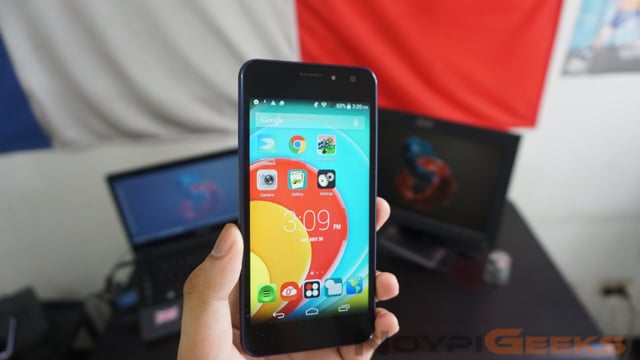 The left side is empty. The right has the volume control and the lock/power switch. At the top we have the microUSB port and the 3.5mm headphone jack. At the bottom we got the built-in microphone and the speaker grill that’s very identical with the iPhone’s. The speaker’s performance is pretty decent. The volume is a pretty loud, although the sound it produces isn’t well-balanced at times. Or it’s just me because I’m nitpicky when it comes to music. Also, you should be careful on holding the device when using the speakers as it can be easily blocked by your hand. This problem usually occurs when playing games. 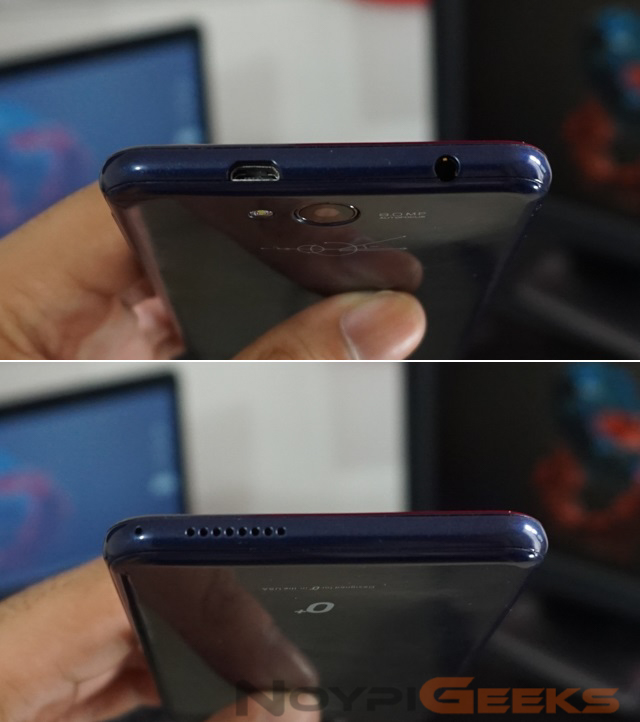 Popping out the back reveals the 8-megapixel primary camera with LED flash and the 360 feature logo (beneath that logo is the actual 360 sensor). 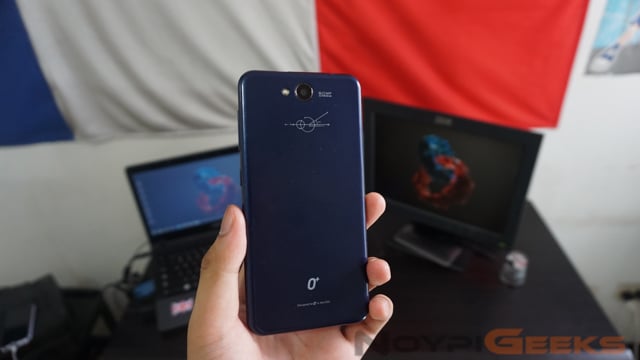 Popping-out the back panel reveals the two sim card slots (micro, regular), the contact for the 360 feature, and the removable 2000mAh battery. 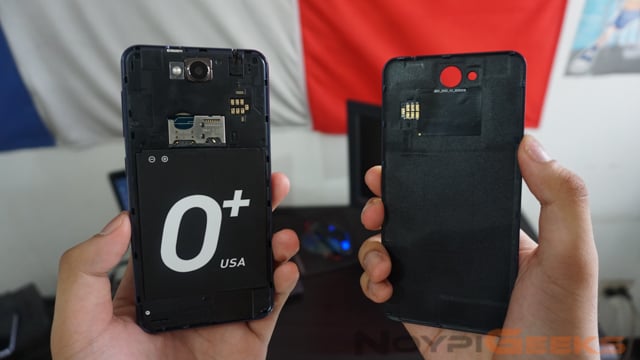 The device utilizes a 5″ HD IPS display, with 1280 x 720 resolution, and has 294 pixels-per-inch. It’s not one of the sharpest screens out there but it’s well enough in most use cases. 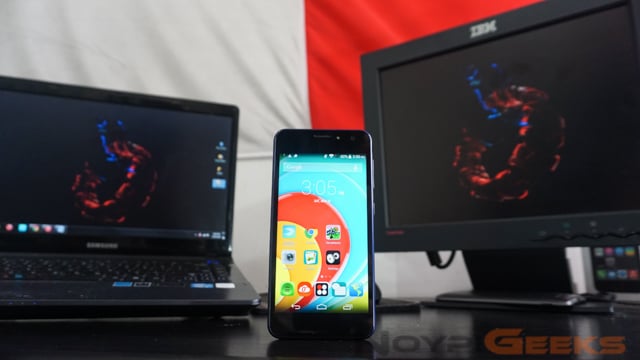 As for any IPS display, this one offers some pretty pleasing quality. Although pixels are fairly visible when you look closely, but the colors it produces is still satisfying. Blacks are deep enough, and the saturation is still gratifying. The display is perfect for media consumption not only because of its quality, but also because of its size at 5-inches. This type of displays are perfect for gaming as you can comfortably use on-screen controls without blocking the majority of the display.

IPS displays also are known to have good viewing angles, which I am clearly seeing on this review unit. Sunlight legibility is also imposing; the device is fully usable on sunny outdoors.

Just like any other device on this price range, the device is powered by MediaTek’s 1.3GHz quad-core processor (MT6582), with 1GB of RAM and a Mali-400 MP GPU. I have reviewed a lot of devices before that’s running on this same particular processor, and their processing performance is, of course, pretty identical on this one.

Browsing through your favorite social media apps, playing games and multitasking are pretty much okay, with some expected bearable hiccups. Although throwing some heavy-lifting tasks on this one may cause the processor to really struggle. I’ve experienced some stutters when I tried to shift directly from a game to Facebook, and also vice versa.

That having said, the 360 HD’s processing performance, keeping in mind the device’s price, is still pretty acceptable.

We’re seeing Android Kitkat 4.4.2 that’s governing this device. Despite being a bit outdated, especially with the announcement of Android M just this week on Google I/O, this Android version still got the guts and still works like how we know it. 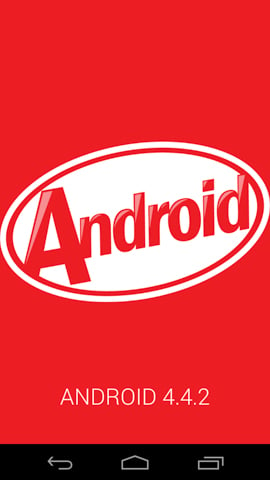 The overall look and feel of the interface is still pretty familiar and cozy. Thankfully, O+ doesn’t utilize any third-party or homemade skin on their devices, that’s why we’re blessed with a full stock Android experience on this one.

Although bloatwares are really inevitable on any smartphone today. But unlike any other manufacturers, O+ only have very few preinstalled applications on this device. What I am seeing here is an app called “O+ Air”, which basically contains links in company’s social media accounts, website and etc. We also have here O+ Air Share, O+’s take on cloud storage. Another extra I’ve seen is the BTNotification app. The app required for their own line of Wearables, the O+ Time and O+ Tag.

We have reviewed the first O+ 360 and O+ 360 Extreme before; and now with the O+ 360 HD, the experience with this particular feature have now been better. As what I’ve said before, this feature is perfect for one-handed operation. The gesture of swipping while browsing through different social media feeds’ can be done on the back of the display, which feels more ergonomic, especially for users with smaller hands. 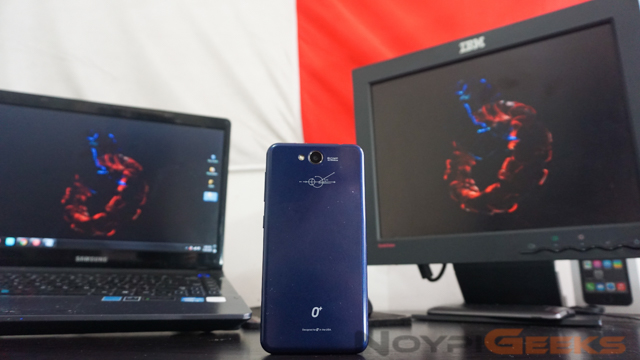 Although I’ve experienced some poor gesture recognition while browsing through my Instagram feed and ended up swiping in the actual display. A future update may fix this, but nevertheless, this feature worked seamlessly on other applications like Facebook, Chrome, Gallery, etc. 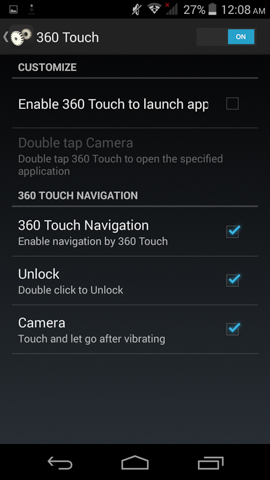 This feature can also recognize gestures for shortcut commands. Double tapping the sensor at the back can open a specific app, which can be assigned on the 360 Touch item on the settings menu. Tap and holding the sensor can also work as a shutter button, while using the camera app. I find this very useful and ergonomic when taking selfie.

Now let’s decode the acronym “HD” on the device’s title. Yes it stands for High Definition. But, HD in what? Display? It can be. But  the acronym actually refers to the device’s high definition camera. What we’re dealing here is an 8-megapixel primary camera and a 5-megapixel front-facing one. There’s also two LED flash on this one. One at the back, one in front.

The primary camera can take some decent photos. Details and colors are pretty accurate. Zooming in into texts that are captured on a photo is fairly usable, even when taken at a distance. Although the contrast is a little bit off on this one.

What? Only 8-megapixel? Don’t worry, it’s not all about pixels these days. Remember, even the iPhone which has one of the best camera in a smartphone today uses only 8-megapixels.

Check out these sample shots: 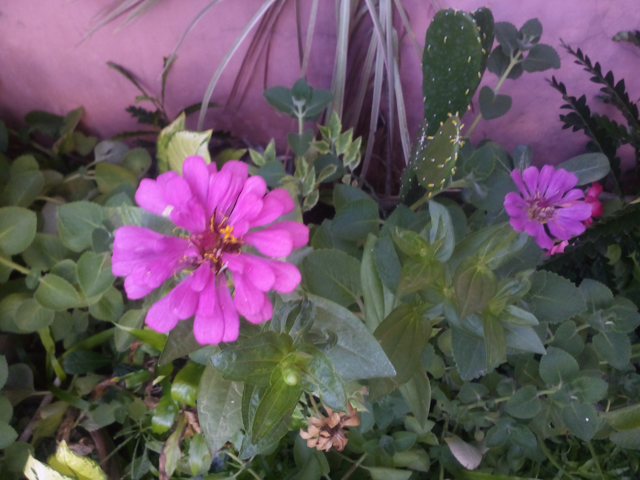 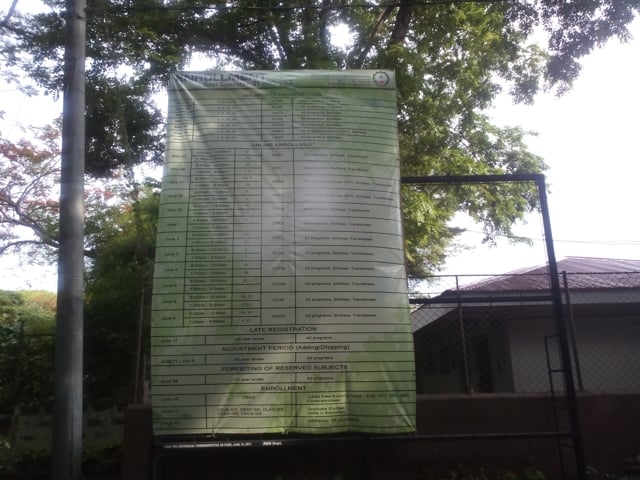 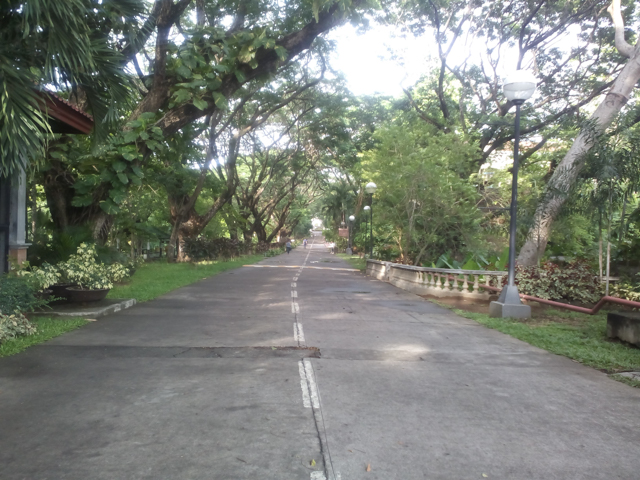 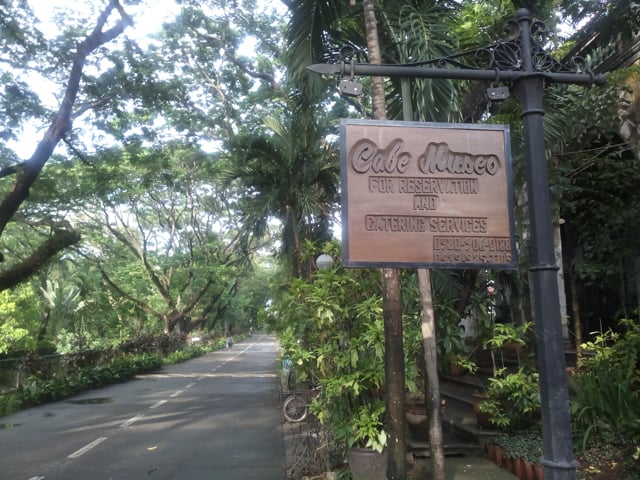 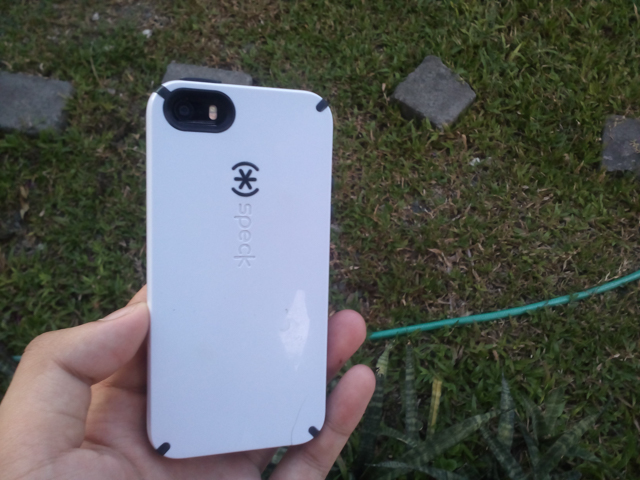 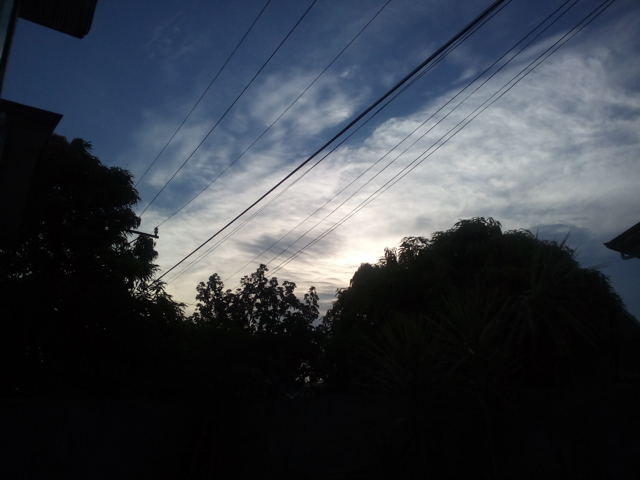 The 5-megapixel front-facing camera on this one is surely a good selfie-shooter. The inclusion of a front-facing flash is also really handy when taking snaps in low-light scenarios. 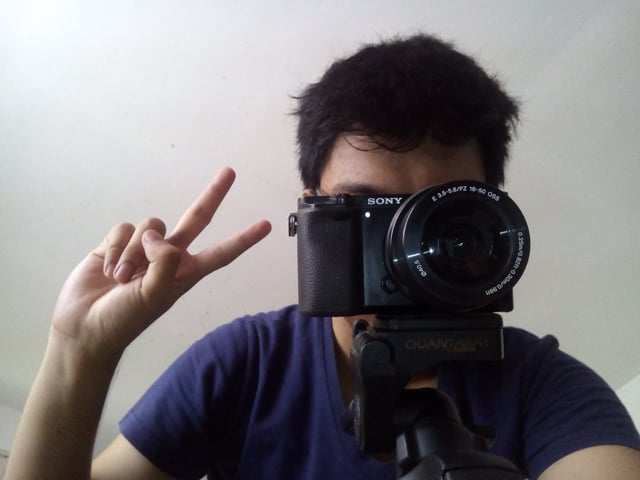 The O+ 360 HD has a 2000mAh battery to power it. This battery capacity isn’t really something to get excited about for a quad-core device like this, which also has a big 5″ display. 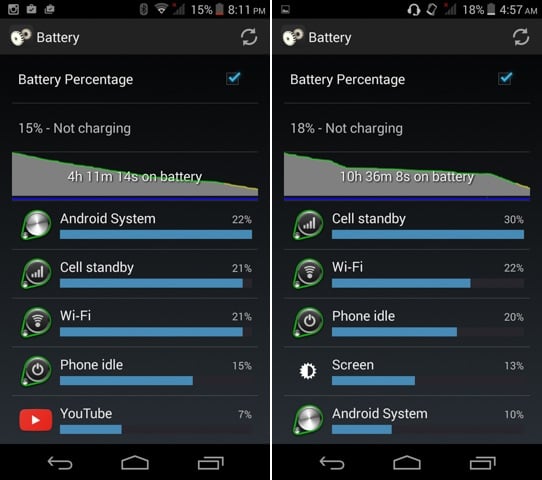 But nevertheless, the device was still able to reach, or at least come close to the longevity that the other devices with higher battery capacity achieved. The device was able to last for up to 10hrs with still some juice to spare at light to moderate use. While screen-on time was still able to reach the upper standard 4hr mark. The O+ 360 HD can last a full day of work or school with some more juice to spare.

O+ 360 HD is the manufacturer’s fourth device that’s equipped with this 360 technology. It’s evident that O+ is really pushing through this technology, as they have already released four device that’s under this category in just under a year. This feature has a lot of potential to hit the mainstream success. Having an extra control mechanism on your device is pretty nice and fun to use. Although I think, O+ must further work on on this technology. For know it’s good, but I think it still can get a lot better. A more accurate recognition and other application integration and other more constructive uses would be a tool for success. 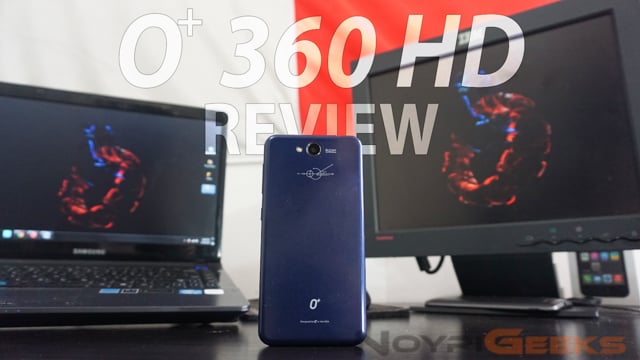 Unfortunately, we only have Android 4.4 Kitkat on the 360 HD. This will probably a deal-breaker to some, as we’re now seeing a lot of local devices, who are also a bit cheaper, that are now running under Android Lollipop. But keep in mind, user-interface and updated operating system is the primary selling point of those devices. Other than that, everything is pretty middling. The O+ 360 offers better and larger display, better camera, build quality, and some other extra quirks.

But for a device with an asking price of only Php6,395.00, this device is selling you not only a 360 feature, but also, as what I have said, a larger 5″ display, and an 8-megapixel and 5-megapixel camera (each with LED flash).

If you’re interested in getting your hands on the O+ 360 HD, it’s available on all O+ USA stores and kiosks nationwide.