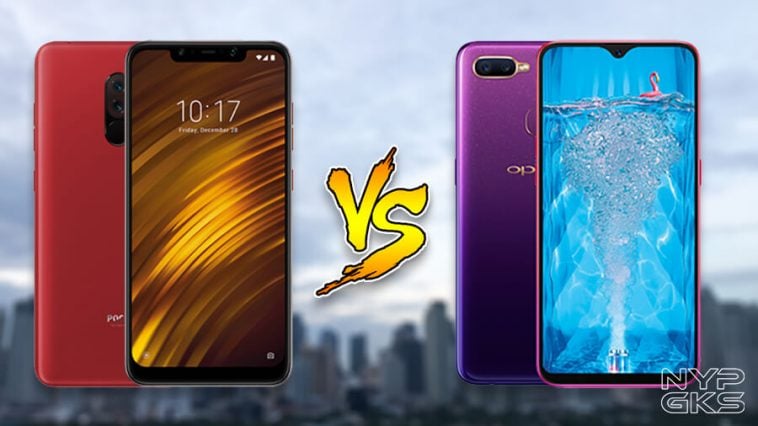 OPPO surprised everyone when they launched the new OPPO F9 — the successor to the several months old OPPO F7. This new device offers a lot of improvements and refinements over its predecessor, in an attempt to stay relevant in the highly saturated midrange market.

The OPPO F9 has better design, battery, display, and cameras over the OPPO F7 — making it the best OPPO midrange smartphone to date.

But as if they haven’t got enough competition, here comes Xiaomi with their new Poco F1 smartphone which is another value-oriented device with a flagship-caliber chipset. By now, we already know that Xiaomi delivers some of the most interesting smartphones for the price. And by the looks of it, the new Pocophone F1 is no different.

In our OPPO F9 versus Poco F1 specifications and features comparison, we’re about to see how OPPO’s offering stacks up with Xiaomi’s latest smartphone. Will the Pocophone F1 eat the OPPO F9 alive? Or can the F9 find a way to make it to people’s hearts? Let’s find out. We can’t say that we didn’t expect this, but the Xiaomi Poco F1 clearly beats the OPPO F9 in this comparison. But to the F9’s credit, it is actually a very interesting device for the price. However, Xiaomi’s insane pricing for the Poco F1 ruined it for OPPO and other manufacturers.

The OPPO F9 sports a MediaTek Helio P60 processor, which is one of the best midrange chipsets around. It also comes with a really generous 6GB of RAM — 50% more than other competing devices.

OPPO’s bet might have lost the majority of the rounds in this battle, but they definitely took the win on the camera department. This handset comes with a 25-megapixel front camera, complete with AR Stickers and tons of novelty features. Meanwhile, the Pocophone F1 settles for a 20-megapixel front-facing shooter. On the back, the OPPO F9 packs a sharper 16-megapixel camera and another 2-megapixel sensor for depth-sensing. Xiaomi’s offering only comes with a 12-megapixel and 5-megapixel rear shooters, so it’s clear that it’s not one of the phone’s strengths..

In addition, despite having a lower battery capacity, the OPPO F9 has VOOC fast charging capability, which is said to be better than Qualcomm’s Quick Charge 3.0 technology. But then again, the Xiaomi Poco F1 takes the ultimate win on this one. The most obvious reason is its Qualcomm Snapdragon 845 processor, which is the same chipset found on other smartphones that costs almost twice or thrice its price.

Xiaomi Poco F1 also boasts an ultra-fast UFS 2.1 storage module, better GPU, and the said 4,000mAh battery that’s significantly larger than the 3,500mAh capacity on the F9. The F1 also utilizes a USB Type-C port, while the latter is still stuck on microUSB. The most interesting part is, despite the large gap that it has over the OPPO F9, the Poco F1 only has a starting price of Rs. 20,999, which is around Php16,000 when directly converted to Philippine pesos.

That price estimation might still change when it officially launches here in the country. But we predict that it will at least match the OPPO F9’s Php17,990 price tag. So if you want the best flagship processor money can get, you might want to wait for the Pocophone F1.