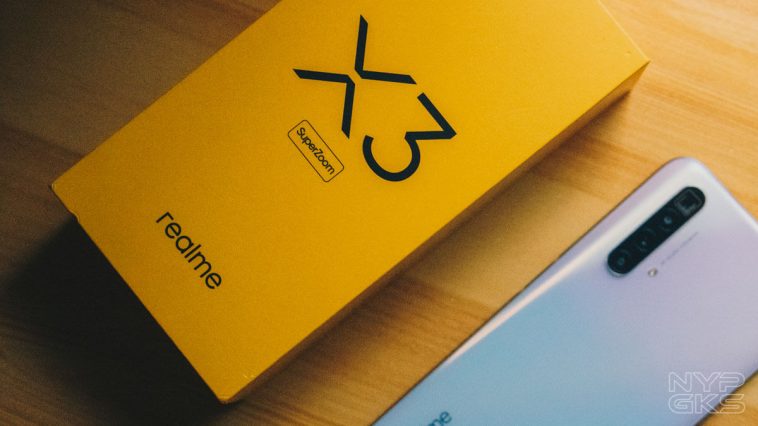 Realme Philippines just revealed that they’re launching the Realme X3 SuperZoom. With its specs and features, this is going to be the most powerful and feature-packed smartphone that the emerging tech brand brought in the country.

Initially launched in Europe, the Realme X3 SuperZoom packs a flagship processor, a large screen, and a periscope-style telephoto lens. All the components that people are looking for on a high-end phone.

The X3 SuperZoom is powered by a Qualcomm Snapdragon 855 Plus octa-core processor. It’s a last-gen flagship chipset that’s still extremely powerful and reliable for 2020.

What’s interesting is, this shall make the device cheaper than most flagship today. Speaking of which, the official local price of the X3 SuperZoom is going to be announced on July 9, 2020, via livestream. Stay tuned for more details.

Going back, the high-end processor is partnered with a whopping 12GB of RAM. That’s more than the 8GB of RAM that more expensive flagships have. It also has a generous 256GB of storage.

For comparison, the Galaxy S20 costs Php49,990 and only comes with 8GB/128GB. However, you’d be really needing all those space as the X3 SuperZoom lacks a microSD card slot.

We need to run it through its course before we can put a final verdict on its performance. So for a detailed look, wait for our full review. However, as early as now, we can say that it’s blazingly fast and smooth. Setting up the device for our full review was already seamless.

Part of the Realme X3 SuperZoom’s speedy feel is its also fast 120Hz 6.6-inch Ultra Smooth display. We praised the Realme 6 Pro and its 90Hz screen, but it’s until the 120Hz territory where you would really feel the difference from the standard 60Hz screen that regular smartphones have.

It felt really fast that going back to the regular 60Hz screens might be impossible once you get used to 120Hz. However, to keep the price reasonable, Realme opted to use an IPS panel instead of Super AMOLED. This is an acceptable compromise since most people would prefer speed and affordable price than having a vibrant screen but costs more.

Since it’s only an IPS panel, Realme can’t use an in-display fingerprint scanner. Instead, the Realme X3 SuperZoom has a side-mounted one, which helped them cut costs and make the back design cleaner.

Speaking of design, the back panel on this device is really clean. Realme takes pride of the anti-glare and fingerprint proof glass that they used in the back — and it works.

Unlike the regular glass that others have, the usual fingerprint smudges on this one are unnoticeable, albeit they’re still present when you look closely.

The Realme X3 SuperZoom is avaialble in Glacier Blue, and the one we have here, the Arctic White. It may have a matte surface, but the panel beneath the glass is reflective that shines as it reacts to light. Also, this white color feels really refreshing in the age of purple, orange, and green smartphones.

Upon first holding the device, you’d immediately notice how large it is. The X3 SuperZoom is 8.9mm thick and weighs 202g. The thickness makes it comfortable in the hands and easy to grip. Let’s just see if we can get used to the weight.

We can’t blame its size from the battery since it only has 4,200mAh worth of it. Although, there’s a function that automatically switches to 120Hz, 90Hz, and 60Hz refresh rate depending on the battery status and what you’re doing (Idle, Gaming, etc.).

The Realme X3 SuperZoom also comes with a 30W Dart Charger. Realme claims that it provide a 100% charge in only 55 minutes. We’ll test that claim in our full review.

As the name suggest, the main highlight of the Realme X3 SuperZoom is its cameras. Primarily, its 8-megapixel telephoto camera. It features a periscope-style lens, like what the Huawei P40 Pro have. It can do 5x of optical zoom and maxes at 60x of digital magnification. It also has optical image stabilization for zooming in at far subjects.

You can practically take a picture of the moon out of this, as you can see in the samples below. A pretty cool party trick.

We also have the 64-megapixel main camera that uses a Samsung GW1 sensor, with an f/1.8 aperture. Realme also highlights the device’s Nightscape 4.0 feature and Starry Night feature.

As usual, we also have the 8-megapixel ultra-wide camera and 2-megapixel macro lens. You can check the initial sample photos we took below. We’ll detail its camera prowess in our full review so be on the lookout for that.

On the front, we have a dual-camera setup. It starts with a sharp 32-megapixel selfie camera and, thankfully, an 8-megapixel ultra-wide shooter. This is more usable than the secondary depth sensor that most smartphones have on their front cameras.

Well, that’s it for now. We’ll have our full review of the Realme X3 SuperZoom once we have its official price is out in the Philippines.

Speaking of which, Realme Philippines will be launching this device via a livestream event happening July 9, 2020 at 12NN on their official Facebook page.