One of the reasons why I absolutely love Android is because of the crazy amounts of customization you can do, even if you aren’t rooted. You don’t want the launcher? Change it. You feel you want more on your Contacts? There’s an app for that, too.

You feel that the onscreen keyboard doesn’t work for you? You have so many 3rd party keyboards to choose from. Truly, there’s so many apps out there in the Play Store (not counting the ones that are distributed outside the Play Store, and I’m talking about the legal ones) that it’s not difficult to get lost. That’s the reason why we came up with this weekly article.

We’re not out to create our own “me, too!” lists of best apps, etc. We envision this to be more personal. We’ll be featuring one app every week that we use, and give our thoughts on why it’s indispensable. It won’t be something that we’ll just try in a day or so, write a review, and never use again. These will be essential apps, and through this, we hope you’d try them and find them essential as well.

For this first in a continuing line of articles, I decided on writing about an app that I’ve used since my first foray into Android: the famous SwiftKey keyboard. The reason for this is because I always get asked by friends why I bothered buying a third party keyboard whereas the default one is good, and there are even free third-party alternatives. In other words, more often than not, I encounter people who can’t justify spending on onscreen keyboards. It isn’t cheap, too, with the phone version going for USD 3.99 (around PHP 175) and the tablet version going for USD 4.99 (around PHP 220). But I’ve seen people buy games for that amount, and those are apps that, more often than not, you’ll play once or twice after finishing it, and then rarely visit it again. Why not spend on that amount for something that you’ll use every time you use your phone or tablet? Is it really worth the price? In a nutshell: YES!!!! 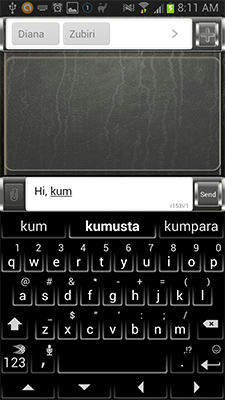 Dictionary works as well as in English and Tagalog, and you can use both at the same time! No need to manually switch. Take THAT MS Keyboard!

It has the best word prediction in the market, bar none. In fact, once you use it, you’ll be able to send messages quickly because it’s not only able to complete the word you’re trying to type, but it’s also able to guess the next word that you’re most likely to use, and it’s given to you via a selection (you’re given up to three) at the top of the keyboard. More often than not, all I do is to just keep selecting those suggested words. I’ve experienced completing a whole sentence without me typing a single letter after my initial word. It’s creepy at times, but it’s absolutely wonderful at the same time! 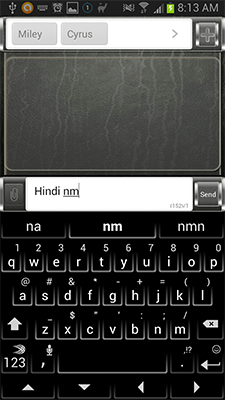 Yes, it knows how you type!

The magic to it is possible because SwiftKey learns about your typing algorithms via 6 possible sources: your SMS, Facebook posts, Twitter posts, mail messages from Gmail and/or Yahoo, and your RSS feeds. To complement that, it also looks at those social media sites for trending phrases. so, even if you haven’t typed in words, or names, like say, Miley, it can immediately offer Cyrus as the next word. 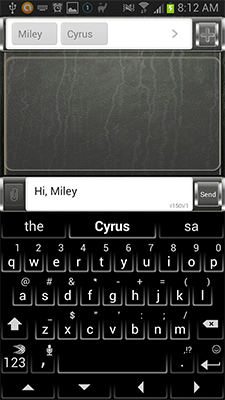 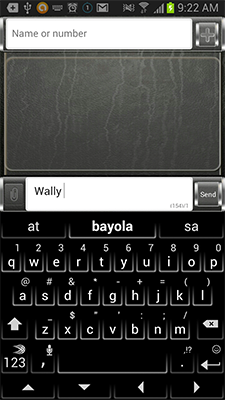 The power of social media! 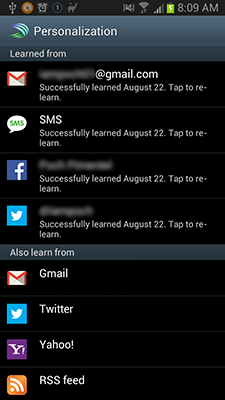 It’s also the most comprehensive keyboard. It seems to be planning itself to be the final word on onscreen keyboards. You get tired of punching in one letter at a time? Try their Flow feature, where you get a Swype-like way of typing. for those who are unfamiliar with Swype, it means that you just slide your finger from one letter to the other. Oo, no need to make pindot-pindot the letters :D Your fingers are busy (ahem)? Then you can opt for voice input as well! It also supports physical keyboards when it detects one. I was able to experience this first-hand when I controlled my phone via TeamViewer and it detected my laptop’s keyboard and automatically adjusted for it. 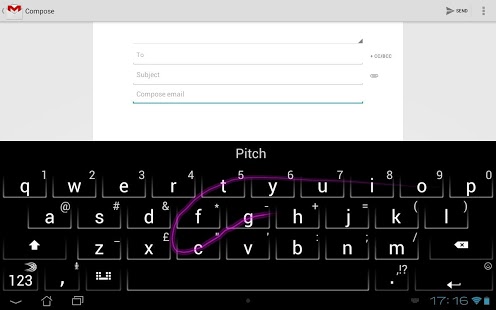 Not my screenshot, but that’s what Flow looks like.

Not only is it able to correct spelling (which you can opt for auto-correction), but it’s also somehow able to distinguish whether a space is needed between words and auto-corrects it for you. This is especially useful if you’re accustomed to typing via Flow.

There are a plethora of other nice tidbits that I would no longer get into, but I can tell you that this keyboard is so feature-packed, I’m wondering why Google hasn’t bought SwiftKey yet and made this the standard keyboard of Android. Granted, the standard keyboard now has the text prediction similar to SwiftKey’s, but when I used it, it wasn’t as good nor as comprehensive. 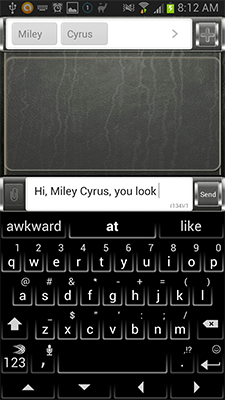 I was going to go for “sexy”, but yeah, I agree “awkward” seems more appropriate

As good as this keyboard is, however, it’s not perfect. For one, being a third-party app has its drags. It doesn’t have pen input support, which is a crying shame because it’s one of the nice things on the Galaxy Note 2‘s default keyboard app.

I’m not closing the door it this feature being added, though, especially since a lot of phablets and tablets these dayse employ their own stylus. I also experience some very weird bugs in some apps and web forms. The latter is especially bad because it seems to have difficulty placing the cursor in message text areas. Typing is fine, but when you try to place the cursor in another part of the message, or trying to highlight a word/words you previously typed, it seems to have a hard time homing in on it. I’d usually resort to the keyboard’s built-in navigation arrows to navigate my way through the message that I’m typing. Thankfully, there’s an easy way for you to report the bugs, and their customer and tech support has been proven to be quite responsive and helpful.

One major caveat I have is that SwiftKey comes in two flavors: one for phone, and the other for tablet, and you can’t use one on the other. Normally, this isn’t much of a problem, but I didn encounter it when i was still using my Samsung Galaxy Note 1.

When using the stock ROM, SwiftKey detects my gadget as a phone. But when I flashed a Custom ROM, my SwiftKey wouldn’t install because it now detected my unit as a tablet. I don’t see myself using custom ROMs in the foreseeable future, nor do I see myself buying a tablet for the moment, but I did buy the tablet version of SwiftKey as well when it went on sale previously (at a crazy-low price at that). One of the good things about SwiftKey is that they would usually go on sale. When it does, I’d recommend you buy it.

On a personal note, SwiftKey was the first app that I paid for, but I’ve been using an “evaluation copy” long before that. I loved it so much and was blown away by it so much that I opted to support the developers instead of free-riding. Yes, it’s that good and it’s that worth it.

Spotlight is our new weekly series where we make writeups/reviews of things we love about the mobile tech world. It’ll be about anything, like apps, gadgets, or editorials. Want something featured in the Spotlight? Tell us about it!