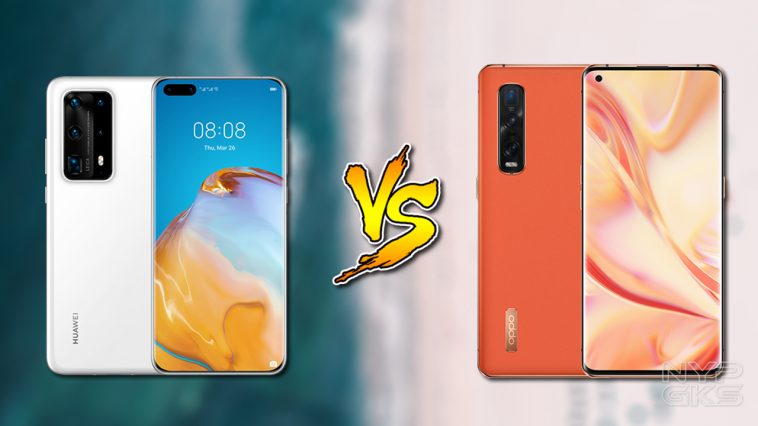 From making affordable smartphones, Chinese brands have progressed to making some of the killer flagship smartphones today.

One of the leaders is Huawei, who just released the new Huawei P40 Pro Plus. It’s the latest, and probably the most feature-packed, flagship smartphone that they launched to date.

It has a high-end processor, killer cameras, ultra-fast charging technology, and other features that make it a proper option if you want to burn money on a brand new phone.

But the thing is, it’s not the only lavish Chinese phone that you can get. OPPO has also improved its game in the last few years — all of which are culminated in its latest flagship device, the OPPO Find X2 Pro.

So today, in our Huawei P40 Pro Plus versus OPPO Find X2 Pro specifications and features comparison, we’ll see how far Chinese flagships have come. And by the end, we’ll help you decide which between the two to get.

Based on the table above, both the Huawei P40 Pro Plus and OPPO Find X2 Pro can pass as proper flagship smartphones today. Heck, these high-end handsets are even better than most devices offered by more prominent brands.

But between the two, it looks like the OPPO Find X2 Pro takes the win in this specs comparison.

OPPO’s offering has overtaken Huawei’s in key and important areas.

For starters, it’s powered by a Qualcomm Snapdragon 865 processor. As per a lot of benchmarks and performance reviews, it’s faster and more powerful than the Kirin 990 chipset that Huawei uses.

The OPPO Find X2 Pro also has 12GB of memory, which is more flagship-appropriate at this age than the 8GB of RAM of the Huawei P40 Pro Plus.

OPPO also nailed the display on this one. The Find X2 Pro comes with a bigger 6.7-inch OLED screen, with a sharper QHD+ pixel resolution, a faster 120Hz refresh rate, and a tougher Corning Gorilla Glass 6. A textbook setof display specs for a premium smartphone.

OPPO also added some extras that Huawei omitted on theirs. For one, it has better audio with its stereo speaker setup, Dolby Atmos support, and a headphone jack.

The OPPO Find X2 Pro also has a whopping 65W fast charging support, while the P40 Pro+ settles for 40W.

Still, thanks to its better display and processor, plus, a more affordable price tag, it appears that the OPPO Find X2 Pro offers better value than the Huawei P40 Pro Plus. But until the P40 Pro+ arrives in PH, we can never tell.