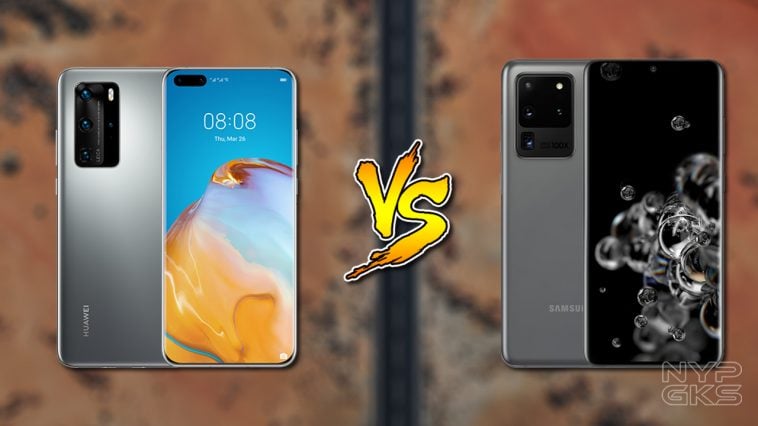 Huawei has just announced its flagship phones for the year 2020.

Here we have one of the best smartphones that the company ever made — the Huawei P40 Pro. Just like its predecessors, this device aims to provide powerful performance and killer camera capabilities.

To see if it has a place in the market, we’ll be comparing it with one of the biggest names in the Android space today — the Samsung Galaxy S20 Ultra.

Just like Huawei’s, Samsung’s latest flagship aims to cover everything you need from a smartphone — from the processing to the camera department.

With that, here in our Huawei P40 Pro vs Samsung Galaxy S20 Ultra specifications and features comparison, we’ll see if Huawei’s latest is really worth your time. And ultimately, we’ll help you decide which between the two is right for you.

As you just saw, both the Huawei P40 Pro and Samsung Galaxy S20 Ultra are equally great devices.

The two have great displays, fast performance, and killer cameras — some of the main pillars of having a great smartphone.

But based on the table above, the Huawei P30 Pro is much cheaper than the Galaxy S20 Ultra. Just like its predecessors, this thing launched with a price tag of Php50,990.

That’s Php19,990 cheaper than Samsung’s offering. Heck, you can even get a decent mid-range smartphone out of that savings.

The P40 Pro is already a great device for what it is. But obviously, it has some compromises that allowed it to be cheaper than the Samsung Galaxy S20 Ultra.

Probably the most obvious one is the lack of Google Mobile Services (GMS). It looks like the US ban ain’t ending soon or maybe ever. We still don’t know.

On the upside, the company has made a lot of improvements on its own Huawei Mobile Services, and even added more apps to their Google Play Store alternative, Huawei App Gallery.

If you’re clever enough, you can even side-load Google Mobile Services on this thing, just like what the Mate 30 Pro users are doing.

Besides the software, the Huawei P40 Pro also has a smaller 6.58-inch screen, and a slightly slower 90Hz refresh rate. In fact, the Galaxy S20 Ultra is hailed as the best mobile display in the market today.

It also looks like Huawei skimped on the memory department as it only has 8GB of RAM, versus the roomy 12GB of memory that the competition have.

On paper, the Samsung Galaxy S20 Ultra seems to have a better set of cameras. But the thing is, in photography, numbers aren’t the only important thing.

It may have a pixel-packed 108-megapixel primary camera, but the sophisticated 50-megapixel sensor of the Huawei P40 Pro might give it a boost. It’s also one of the first devices to have octa-PDAF technology.

Our mixed-bag reaction continues to the other cameras. The Huawei P40 Pro takes the lead on the ultra-wide game with its 40-megapixel Cine lens, versus the regular 12-megapixel ultra-wide on the latter.

The Samsung Galaxy S20 Ultra is also capable of 8K video recording while the Huawei P40 Pro is only at 4K.

I guess the bottom line here is, it will now depend on your budget. If you don’t mind going on board with HMS or installing GMS on your own, then you’d be getting great value out of the Huawei P40 Pro.

But if money is not an issue, then spending more on the Samsung Galaxy S20 Ultra entitles you to the best mobile display experience, sharper selfie and primary cameras, stereo speakers, and a bigger battery.

We’ll also be comparing the Galaxy S20 Ultra to the new Huawei P40 Pro Plus, so stay tuned for that.