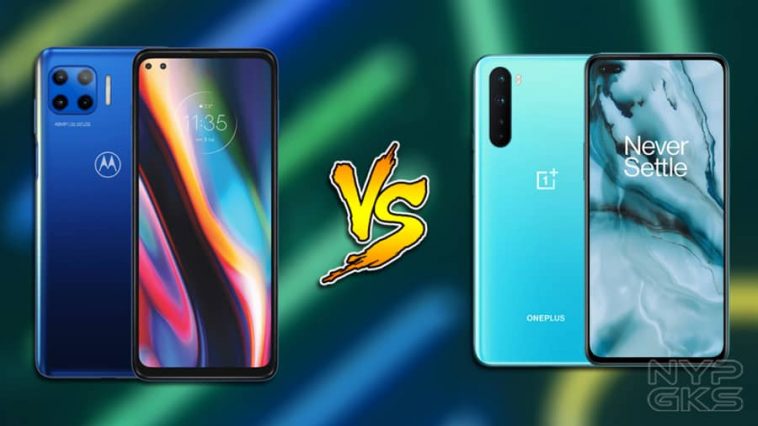 There’s almost no point in spending more for a flagship phone, especially now that midrange devices have become more powerful and well-equipped. In today’s comparison, we’ll check out two of your best options if you want a powerful device that doesn’t break the bank.

Both devices are currently available in the Philippines. The first one is the MOTO G 5G Plus. As the name suggests, it packs next-gen wireless connectivity that offers blazing speeds for next-gen activities.

We’ll be comparing it with another 5G-enabled smartphone, the OnePlus Nord. This is the company’s first midrange phone in a long time, and the wait is very much worth it.

Other than 5G, it has all the other buzzwords you’d find on a killer 2020 smartphone. There’s a fast display, great cameras, and fast-charging technology.

Clearly, you don’t have to spend all your savings to have a seamless smartphone experience. But the question is, which between the two should you actually trust your money on? We find out in our MOTO G 5G Plus and OnePlus Nord specifications and features comparison.

As you can see, OnePlus Nord costs a bit more. And that’s the reason why it was able to have a fancier build. It’s sandwiched with premium Gorilla Glass 5 with an aluminum frame.

On the other hand, the MOTO G 5G Plus only has a plastic back and frame. Surely behind the Nord, but pretty standard for a device in its class.

Motorola didn’t even bother to come up with other colors than the Surfing Blue. On the other hand, the OnePlus Nord comes in a funky Blue Marble, almost Cyan like color, and a more subtle Gray Onyx.

Due to their budget nature, neither have water resistance, other than the MOTO’s water-repellent paint job. Moreover, both phones are also relatively thick and heavy due to all the power they are packing inside.

The MOTO G 5G Plus comes with a fast and enormous 6.7-inch FHD+ IPS 90Hz screen. It’s great if you really want an enormous screen for watching movies or multi-tasking. But if you want that’s large but still compact enough and has better quality overall, then you have to pay more and get the Nord.

It may be smaller at 6.44-inches, but it does use a more vibrant and contrasty Fluid AMOLED technology.

But just like most fancy phones, it lacks a headphone jack, unlike the MOTO device. So if you’re an audiophile who’s still clinging to your wired earphones, then you might want to get a Type-C to headphone adapter since it doesn’t come with one — or go with the MOTO G instead.

This is where they have their main differences. As you can see, their key highlight is 5G connectivity, which is made possible by their Qualcomm processors. The MOTO G 5G Plus comes with Snapdragon 765 CPU, while the latter has the Snapdragon 765G.

Actually, both chipsets are pretty much the same. Obviously, the Snapdragon 765G is slightly more powerful, offering 20% better graphics performance.

If you plan on gaming a lot, then go with the OnePlus Nord. But if like hoarding files, photos, and other media, you might be better off with the MOTO G 5G Plus, as it offers a microSD card slot for storage expansion, which the former does not.

Due to its higher price, the OnePlus device gets to have an in-display fingerprint scanner. But based on our experience from tons of smartphones we’ve reviewed, we expect the side-mounted scanner on the MOTO G to unlock faster and more convenient.

The rear cameras on both handsets are similar. They have your standard 48-megapixel main, 8-megapixel ultra-wide, and two extras for macro and depth sensing.

The Nord flexes its price tag through its optical image stabilization (OIS), guaranteeing clearer images even if you have shaky hands or at low-light scenarios.

It also has a sharper 32-megapixel selfie camera. On the upside, both devices have ultra-wide front-facing cameras, retiring selfie-sticks for group shots.

Here’s where the MOTO G 5G Plus outshines the OnePlus Nord. As you can see, it has a larger 5,000mAh battery, which should give you a couple of hours more than the 4,115mAh of the former.

To OnePlus’s credit, the Nord does have a faster Warp Charge 30T technology versus the 20W Turbo Power of the G 5G Plus. Still, we’d prefer having a large battery that lessens the need to charge it in the first place.

As you can see, you’re really getting your money’s worth for the OnePlus Nord. It has a fast and vibrant screen, a better processor, OIS, sharper selfie camera, fancy UD fingerprint scanner, and of course, a premium build.

But if you’re really practical, then you might be better off with the MOTO G 5G Plus. It may not have all the extras that the former have, but the essential features are pretty much the same.

You can increase the Nord’s storage by spending Php4,000 more for the 12GB/256GB model. But with the MOTO G 5G Plus, you can expand the storage by getting a microSD card of whatever capacity, and you’d still be spending less.