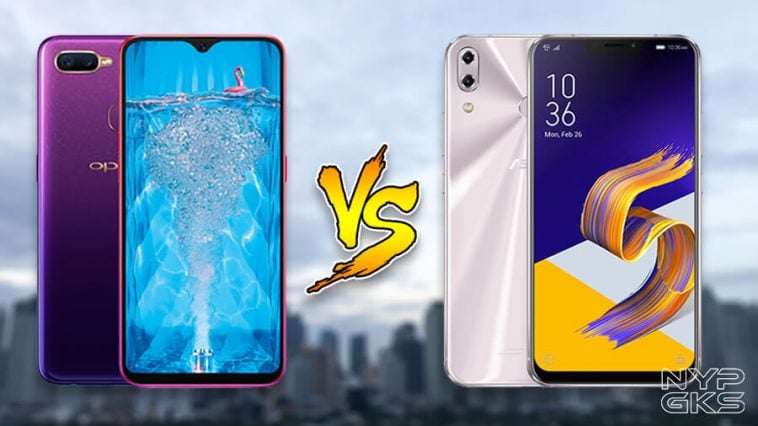 Midrange smartphones used to be lame and underpowered alternatives to high-end devices. But now, they became more stylish and really capable that there’s almost no reason for people to spend more than Php20,000 on a smartphone, which people will inevitably replace in a year or two.

Some of the devices that were able to pass the requirements are the OPPO F9 and ASUS Zenfone 5 2018. These two smartphones came from companies known for their midrange and high-end smartphones.

Their expertise in both fields allowed them to come up with handsets that have a premium design, capable hardware, and reasonable price. But which of these two should you trust your hard-earned money on? Here in our OPPO F9 versus ASUS Zenfone 5 2018 specifications and features comparison, we’ll see which between these two devices can provide the best possible smartphone experience for the consumers. Let’s start! Both the OPPO F9 and the ASUS Zenfone 5 2018 have an equally compelling set of specs. For us to know who’s the ultimate winner here, let’s list down the wins of each device.

Let’s start with the OPPO F9. This phone easily takes the first round as it runs on a newer version of Android. It also comes with a dedicated microSD card slot, while the Zenfone 5 2018 uses a hybrid slot so consumers can’t use two SIMs if they want expandable storage. Also, I find the design of the OPPO F9 more appealing. Although it might be subjective, I bet most people would prefer its geometric patterns on the back and the tiny display notch on top, rather than the simple look and the thick notch of the ASUS Zenfone 5 2018.

OPPO’s offering also has 6GB of RAM, which is 2GB more than what the Zenfone 5 has. Actually, it’s the best among any other midrange devices in the industry today.

Of course, there’s also the 25-megapixel selfie camera packed with tons of novelty features. OPPO also rigged it with a 3,500mAh battery with VOOC fast-charging technology. Now let’s take a look at the other camp. While the OPPO F9 sure has the better selfie camera, the ASUS Zenfone 5 2018 do have superior dual rear cameras. It has a 12-megapixel and another 8-megapixel sensor with a wide-angle lens.

ASUS also included a 4-axis optical image stabilizer, which is a rare find in midrange devices such as this. All of those are clearly better than the 16-megapixel + 2-megapixel rear cameras of the F9 — at least on paper. The Zenfone 5 2018 also has dual speakers for better audio. You can also plug in a pair of headphones and enjoy its virtual surround sound technology. It also has newer connectivity features such as Bluetooth 5.0, NFC, and USB Type-C.

In conclusion, both smartphones are some of the best devices that you can get for the price. However, my bet is slowly leaning towards the OPPO F9. At Php17,990, it’s almost Php2,000 cheaper than the ASUS Zenfone 5 2018. For the price of Php19,995, you might be getting a few extras with the ASUS Zenfone 5 2018. It has way better rear cameras, dual speakers, and elegant-looking design. But in my opinion, the features that you’d be getting with the F9 is more worth it.

As stated earlier, it has a better design, comes with more RAM, a better selfie camera, and ultra-fast charging capability. Also, the processor that it has is comparable to what the Zenfone 5 has, so no issues there. But at the end of the day, it all boils down to personal preference and the needs of the consumers. So here’s our advice: go ahead and check them out in person to see which one you’d like better.