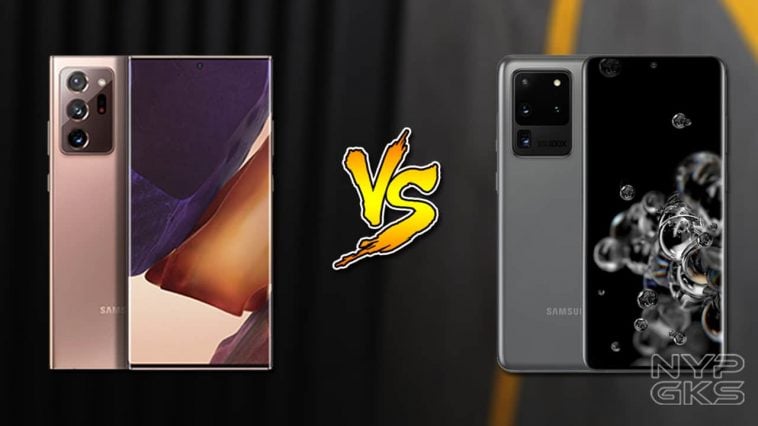 Samsung is still a household name when it comes to premium and high-end phones. So if you’re eyeing to get one, our comparison for today will stack up two of the best Samsung smartphones you can get for the money.

First, we have the newly released Samsung Galaxy Note 20 Ultra. The tech giant made this device really interesting, and the vanilla Galaxy Note 20 really boring, that there’s almost no point in getting the latter.

But before you go ahead and get this device, you might also want to consider the Samsung Galaxy S20 Ultra. Judging by the name, it has the same Ultra-level specs and features.

Launched a couple of months earlier, this device shares identical features to the Note 20 Ultra like the latest Exynos 990 processor and 120Hz refresh rate screen.

So the question is, what is the main difference between the two and which one is right for you? We’ll help you make the decision in our Samsung Galaxy Note 20 Ultra versus Galaxy S20 Ultra specifications and features comparison.

Samsung has been making high-end Android phones for years so it’s no surprise that they can design an elegant, premium-feeling smartphone. Both the Galaxy Note 20 Ultra and Galaxy S20 Ultra are sandwiched with glass and a sturdy metal frame. It both looks and feels high-end, just as it should.

However, the Note 20 Ultra gets to have the latest Corning Gorilla Glass Victus. It’s two times more scratch-resistant than the Gorilla Glass 6 of the S20 Ultra and can withstand up to two meters of drops.

The screen on the Galaxy Note 20 Ultra is also curvier than the latter, a signature look on Samsung flagships. It’s also thinner and lighter than the S20 Ultra.

Samsung has also introduced its new Mystic Bronze color on the Galaxy Note 20 series. A new colorway that they implemented on the also-new Galaxy Buds Live, Watch 3, and Tab S7 series.

Bottom line is, both devices are some of the most well-built and well-designed smartphones in the market today.

The Samsung Galaxy Note 20 and S20 Ultra pretty much have the same displays. They both come in at 6.9-inches, with similar QHD+ resolution, HDR10+, and the smooth 120Hz refresh rate.

Possibly their only main difference is the screen brightness. The Galaxy S20 Ultra peaks at 1,342 nits, which is already impressive for that rate — but Samsung steps it up further by jumping to 1,500 nits on the Note 20 Ultra.

Both devices also have stereo speakers and Dolby Atmos technology. On the downside, neither have headphone jacks and we don’t expect this feature to make a comeback ever. On the upside, they should pair well with the new Samsung Galaxy Buds Live.

As the name suggest, the Samsung Galaxy Note 20 Ultra and S20 Ultra are in the same generation. Hence, they also share the same processor.

Fans have been pushing Samsung to give up Exynos in lieu of Snapdragon. Disappointingly, just like in the previous years, only the United States model will be getting the Qualcomm Snapdragon 865 models, while we here in the Philippines and other markets will have to settle for the Exynos 990.

Still, the Exynos 990 should provide powerful and seamless performance, especially when partnered with their 120Hz screen. This latest processor also allowed both devices to have 5G connectivity.

Both devices come with 12GB of RAM, but Note 20 Ultra does have a cheaper 8GB model. The former also has a more roomy and faster 256GB UFS 3.1 storage, while the latter has 128GB UFS 3.0. If those are not enough, they do come with a microSD card slot for storage expansion.

However, this shouldn’t be a big issue since the 100x images we got from the S20 Ultra is not that great anyway.

As for the selfie cameras, the S20 Ultra comes with a sharper 40-megapixel front-facing camera. The Note 20 Ultra only has 10-megapixel, but it does have larger individual pixels for brighter selfies. It also has a faster dual-pixel PDAF technology.

It’s also worth noting that you can use the latest Galaxy Buds Live as an external wireless microphone on the Galaxy Note 20 Ultra when video recording.

The main key selling point of the Galaxy Note series is the S Pen. So if you’re into art or like writing stuff for work and whatnot, then the Galaxy Note 20 Ultra will suit you better.

Samsung also introduced the new wireless DeX feature on the Galaxy Note 20 series. From now on, you don’t need wires to pair your smartphone on your TV for a desktop-like experience. Whether this feature will arrive on the S20 Ultra or not is yet to be announced.

Here’s an obvious win for the Samsung Galaxy S20 Ultra. As you can see in our specs comparison table above, it has a 5,000mAh capacity, while the latter only has 4,500mAh.

It also has a faster 45W fast charger, while the Note 20 Ultra only has 25W — which is really unacceptable for the price.

The Samsung Galaxy S20 Ultra retails for a price Php69,990. Compared to the Galaxy Note 20 Ultra, this one has a bigger battery, faster charging, and better selfie camera. It then shares the same screen, processor, and 5G connectivity.