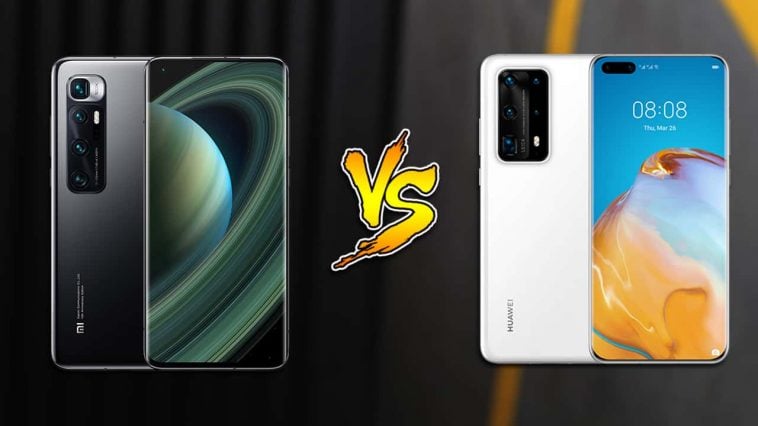 Are you an aspiring or professional photographer who wants a smartphone to go with your passion? Well, you’re in luck. In today’s comparison, we’ll be comparing two of the best camera phones in the market today.

First, we have the brand new Xiaomi Mi 10 Ultra. This 10th-anniversary smartphone of the Chinese tech giant aims to make a mark by not only having great cameras but also have maxed out numbers in almost all areas.

We’ll be comparing Xiaomi’s latest to the best smartphone that Huawei currently makes — the Huawei P40 Pro Plus.

Just like the former, this device boasts some of the best specifications that you can find on a smartphone today.

So the question is, which between the two are actually better? Which one is worth your hard-earned money? We find out in our Xiaomi Mi 10 Ultra versus Huawei P40 Pro Plus specifications and features comparison.

Smartphone designs, whether it looks good or not, will depend on your personal preference. With that, we’ll let you decide which between the Xiaomi Mi 10 Ultra and Huawei P40 Pro Plus looks better on your eyes.

Both phones have curved edges, which makes them really comfortable to hold. Although, it’s noticeable that the Huawei smartphone is a bit curvier.

The Xiaomi Mi 10 Ultra is protected by Corning Gorilla Glass 5 on the front. On the other hand, Huawei didn’t mention the exact glass they used on the screen on the P40 Pro Plus.

On the back, the Huawei P40 Pro+ uses a ceramic back panel that you can get in black and white. Meanwhile, the Xiaomi flagship comes in Silver, Black, and Xiaomi signature Transparent Edition.

Here’s an easy win for the Xiaomi Mi 10 Ultra. It sports a 6.67-inch Super AMOLED screen that’s obviously bigger than the 6.58-inch OLED screen on the latter. It also has a smaller and less-distracting punch-hole thanks to its single front camera, while the Huawei P40 Pro+ has an extra 3D camera on the front that’s taking too much space. However, it does improve the reliability of its face unlock feature.

With their OLED screens, both phones also have in-display fingerprint scanners. A norm on pretty much all midrange and high-end devices today.

On the downside, both devices lacks a headphone jack — but that’s something we’ve expected. Although, the Xiaomi Mi 10 Ultra makes up for it thanks to its stereo speaker setup — while the P40 Pro Plus only has a single bottom-firing speaker.

Qualcomm flagship chipsets are considered as the best in the industry. That’s the same on the Snapdragon 865 chipset of the Xiaomi Mi 10 Ultra, which beats the Kirin 990 of the Huawei P40 Pro Plus in a lot of benchmarks, CPU, and battery efficiency tests.

If that’s not enough, Xiaomi is also giving you an option to get the Mi 10 Ultra with 16GB of RAM, which is double than the 8GB only option of the Huawei P40 Pro Plus. The Xiaomi Mi 10 Ultra also has a faster UFS 3.1 storage, while the latter has UFS 3.0. On the downside, it lacks storage expansion, which is not a problem on the Huawei P40 Pro Plus.

The newer processor allowed both devices to have modern and next-gen connectivity features. They both have 5G, WiFi 6, and Bluetooth 5.1. Both models also have IR blasters that let you control non-smart TVs and other appliances.

We now head on to the highlight of these smartphones. The Xiaomi Mi 10 Ultra currently holds the top seat on DxOMark’s list of best camera phones. It’s followed by the Huawei P40 Pro, which has a similar camera setup to the P40 Pro Plus.

However, the Xiaomi Mi 10 Ultra takes back the lead with its better color rendition, low-light performance, longer hybrid zoom range (120x vs 100x); and 8K video recording, which is disappointingly missing on the P40 Pro Plus.

It’s clear in the specs comparison table above that the Xiaomi Mi 10 Ultra won this round. As you can see, it has a 4,500mAh battery that’s larger than the 4,200mAh capacity on the latter. But with its higher 120Hz refresh rate, we expect them to have similar longevity.

If that’s not enough, the Mi 10 Ultra also has a whopping 120W fast charger, three times faster than the 40W on the competition. Its 50W wireless fast charging also beats the P40 Pro Plus’s 40W.

Now, let’s talk about the elephant in the room. The Huawei P40 Pro Plus might have one of the best hardware in the market today, but it’s being brought down by the software.

To Huawei’s credit, they have greatly improved their own ecosystem to compensate for the lack of GMS. Plus, there are ways that you can sideload Google apps.

But if you’re paying this much on a smartphone, we bet you don’t want to go through that hassle. The kind of hassle you won’t experience on the Xiaomi Mi 10 Ultra.

The Xiaomi Mi 10 Ultra’s brighter and smoother screen, more powerful processor, better cameras, bigger battery and faster charging, and the fact that it has GMS and the other doesn’t, makes it an easy winner on this comparison.