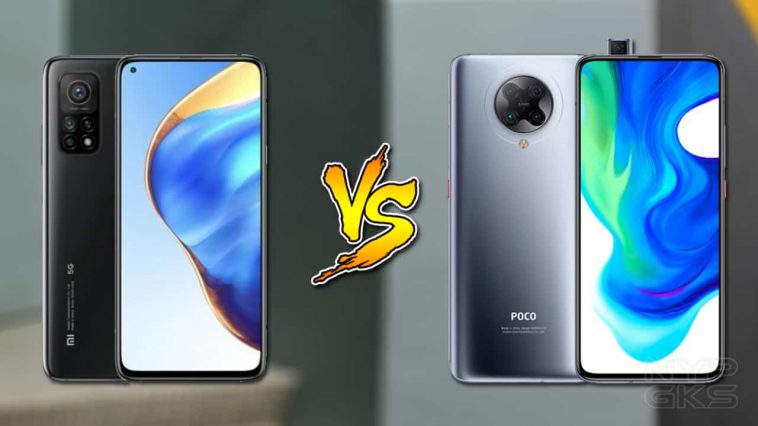 Xiaomi has disrupted the high-end smartphone segment and ruined it for its competitors. Their latest releases, the Mi 10T and POCO F2 Pro, offers a couple of top-tier features that were never though we’d for their price range.

The Xiaomi Mi 10T is the newer model. As the name suggests, it belongs to Xiaomi’s Mi 10 flagship line, with a couple of odd differences over the top models to make the price cheaper.

On the other hand, the POCO F2 Pro is the first flagship release from the Xiaomi sub-brand after its first phone from two years ago.

Just like the former, this thing has all the top features you might need for a powerful daily driver smartphone.

So the question is, which between the two should you get? We find out in our Xiaomi Mi 10T vs. POCO F2 Pro specs comparison.

The key highlight of the POCO F2 Pro is its pop-up camera. This results in a clean, distraction-free display with ultra-thin bezels. Plus, having the camera levitate every time you take a selfie looks really cool.

However, there are still people who are sketchy about having mechanical parts on their smartphones. Xiaomi claims its pop-up mechanism is durable and can last for years. Still, it feels riskier than having a simpler, straightforward punch-hole like what the Xiaomi Mi 10T has.

Personally, we prefer the latter. You can take selfies or use the face unlock much faster. Plus, the punch-hole is positioned on the far left corner, so it’s not really that distracting. It also has a side-mounted fingerprint scanner, which should work faster than the UD scanner on the other.

Both the Xiaomi Mi 10T and POCO F2 Pro are sandwiched with Corning Gorilla Glass 5 with aluminum chassis for a solid and sturdy feel. However, neither have any official IP-rating for water and dust resistance, but I guess that’ll be too much to ask for the price.

It’s a neck-and-neck battle in the display department. If you love watching movies, then you might enjoy the vibrant colors that the AMOLED screen on the F2 Pro offers. But if you’re all about speed and gaming, then the Mi 10T’s whopping 144Hz adaptive refresh rate is what you want.

The Mi 10T also has AdaptiveSync, which intelligently switches to 30Hz/48Hz/50Hz/60Hz/90Hz/120Hz/144Hz, depending on what you’re doing to conserve battery.

POCO also won the audio department. As you can see, it has a stereo speaker setup, while the other only has one. But to the F2 Pro’s credit, it was able to keep the headphone jack, which is now missing on the former. That’s an issue you can easily fix by getting a Type-C to 3.5mm adapter or just get a pair of wireless earphones.

Thanks to their processors, the Xiaomi Mi 10T and POCO F2 Pro were able to qualify as flagship phones. As you can see, they both come with Qualcomm Snapdragon 865 octa-core processors, which is one of the most powerful chipsets in the market today.

To the F2 Pro’s credit, it does have a Vapor Chamber Cooling. Albeit, we doubt you’d notice the difference unless you’re gaming hard.

On the downside, neither have a microSD card slot for storage expansion, which can be a big bummer for power users who hoard many pictures, videos, and apps.

The bottom line is, both devices are powerful. But you can expect a smoother experience on the Mi 10T thanks to its faster refresh rate screen.

Other than the processors, the Xiaomi Mi 10T and POCO F2 Pro share the same set of cameras. They both have 64-megapixel main shooters, 13-megapixel ultra-wide, and a 5-megapixel macro camera. The Mi 10T lacks a 2-megapixel depth sensor, but it should still have a portrait mode feature in the camera app.

The POCO F2 Pro may have a pop-up mechanism, but it does share the same 20-megapixel sensor. So if camera quality is a top priority, you can’t go wrong with either of these devices.

Here’s a big win for the Xiaomi Mi 10T. It has a 5,000mAh battery, which is larger than the 4,700mAh on the POCO F2 Pro. But since it has a faster screen, the total longevity might be similar. Both devices also come with a 33W fast charger.

The POCO F2 Pro is still officially listed at a starting price of Php26,990. However, there are reports suggesting that it will be made much cheaper at Php18,990 — possibly to make way for the Mi 10T.

So the question is, which one is better? Specs-wise, we gotta hand the win to the Xiaomi Mi 10T. As you can see, it has a cleaner design, a larger battery with wireless charging, stereo speakers, and an ultra-smooth 144Hz screen. That’s a very compelling value for its price of Php24,990.

But if you want a balance between price and performance (as if the Mi 10T is not cheap enough already), then you might want to get the POCO F2 Pro at its supposed new price. For a cheaper SRP, it has the same processor, cameras, and charging speed — which everything you might ever need from a smartphone.