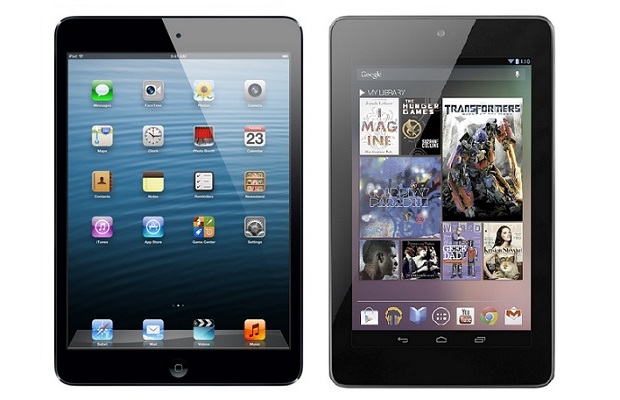 The iPad mini 2 has arrived and, as with most of Apple’s high-profile devices, does not fall short in features and performance. Its long-awaited Retina display certainly hogged the spotlight, though its other specs are noteworthy, too. But the question in everyone’s mind is: does it really stack up to its fiercest rival, Google’s Nexus 7 2013?

Let’s start with how much each tablet will set customers back:

Clearly, the Nexus 7 is the sweeter choice for those looking for a cheaper device.

The iPad mini 2 wins this round for having a slightly larger 7.9-inch display (2048×1538), allowing users to view more content. By comparison, the Nexus 7 has—as the name implies—a 7-inch screen (1920×1200). Both offer high pixel densities, with a very negligible difference. Perhaps because of its smaller display, Nexus 7 beats the iPad mini 2 for weighing at only 290g (Wi-Fi version). Its cellular variant just adds a further 9g. On the other hand, Apple’s small tablet starts at 331g for its Wi-Fi model and goes as heavy as 341g for models with mobile connectivity.

Tests done by playing a looping high-def video have shown that the Nexus 7 can last some minutes short of 9 hours. Apple, meanwhile, claims its slate can endure up to 10 hours of general use before requiring a recharge.

Here comes the tricky part. The iPad mini 2 runs iOS, while the Nexus 7 is powered by Android. Both have an abundance of features—as well as disadvantages—so the choice here is really down to user preference.

So what’s our final say on this iPad mini 2 vs Nexus 7 comparison? In all fairness, both tablets are good. If you’re a little bit sensitive on price, then Google’s offering is your best choice for a high-quality, budget device. On the other hand, you can’t go wrong with the mini, as long as you’re willing to spend more for it.