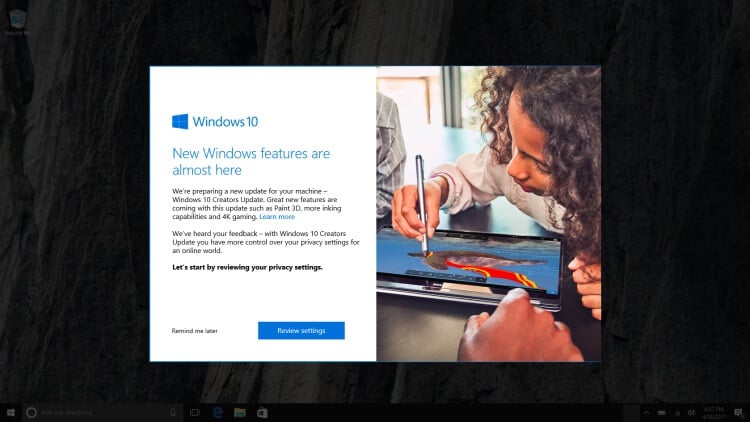 Like last year’s release of Windows 10’s anniversary update, Microsoft is releasing the anticipated next major update to its current generation flagship operating system in phases and the began rolling out last April 11.

Following on the principle of a phased release, the Windows 10 Creators Update will not be immediately available to all devices as its initial launch is slated for newer devices.

While end-users who qualify with the criterion of having a more recent device may be the first to experience Windows 10’s major overhaul, next comers may get the benefit of getting the highest quality update experience resulting from a more refined update contents based on early feedbacks from first-hand end-users.

As per a blog post written by John Cable, Director of Program Management, Windows Servicing and Delivery, “we believe a phased approach provides the highest quality update experience to the broadest set of customers.”

However, it seems that not every Windows 10 users are going to be able to get their hands on the update sooner than they would expect given that the developers are taking the approach on different classifications, estimating to last over a span of several months.

For Windows 10 users who are still using an aging device, that might imply being on the waiting list for a definite yet rather long period before the update would even arrive in their device.

Windows Phone users, on the other hand, may have to wait until April 25 for the initial rollout of the update to get to their devices. Like its other counterpart, the update release will be in phases.

Presently, there is only one of two ways of getting the update by any qualified user: automatically via the phased rollout or manually via Software Download Site.

How to get Windows 10 Creators update

You know your device is qualified for the update when you are prompted by the system to configure your privacy settings for the major update’s installation. Proceeding through the installation of the update is not much different than installing anything else on your computing device. You will just have to wait throughout the process.

Once installed, the system will be required for a reboot yet something that gives users the choice between restarting now, setting it at a later but specific time, or go on a snooze. Regardless, just do the reboot for the completion of the Creators Update’s installation. If you are impatient in getting the automatic update to come directly to your device and just wanted to get on it manually yourself, you would need a program called Windows 10 Update Assistant, a tool specifically developed for the Creators Update. The tool will not only update fetch the Creators Update for your device, it also first scans your device whether or not it is compatible for the update (not all Windows 10-capable devices may be able to handle the update’s new features).

For those who would not mind starting everything from scratch and getting the update from there, a clean install of Windows 10 will enable the user to get the Creators Update with the manual update consequently.