Well, of course, Cherry Mobile is also in the wearable business. We’ve seen some of their attempts to penetrate the wearable market before with the G2, and watches that are simply shrunken down smartphones, which are ambitious in my opinion. It didn’t really convince the majority of the market back then.

And now, Cherry Mobile is at it again with the Cherry Fit, a very unassuming device that still promises great functionality. Let’s dig it out

If the product name still didn’t make it obvious, this thing is centered for fitness buffs. The slim profile is kinda reminiscent to the Samsung Gear Fit, which is also a fitness-centric wearable from the Korean electronics giant. This form factor is really suitable for fitness trackers; we’ve seen the band-like design worked in other prominent companies that have pioneered the industry like Garmin and FitBit. And also, for those who are unfamiliar, the device looks very identical with the Huawei TalkBand B2. 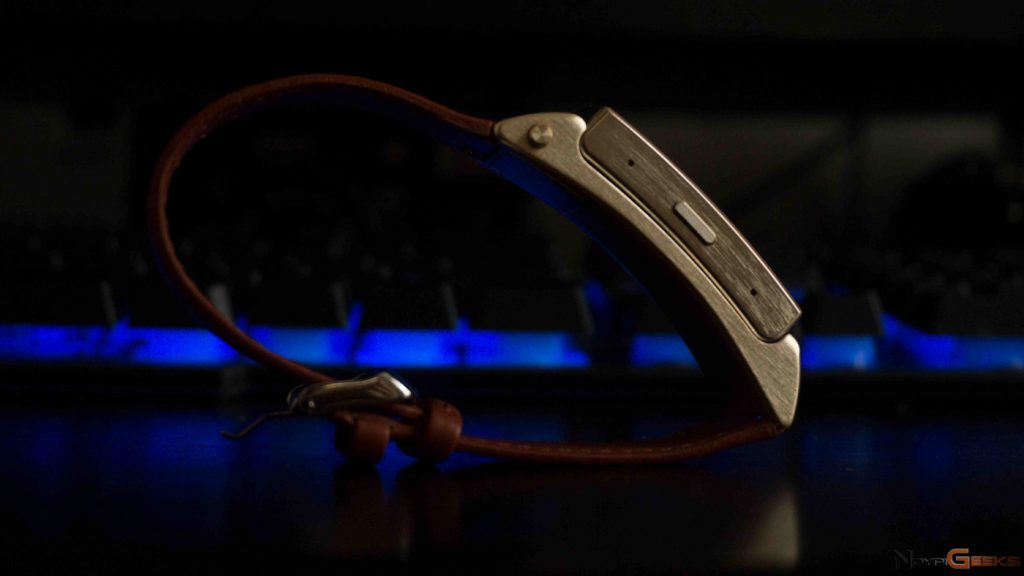 However, the bands of the Cherry Fit aren’t really dressed for the occasion. The device is available in all black and Gold, both came with leather straps. This thing sure does scream elegance, but sweating on this thing can be irritating.

And just like the TalkBand B2, the Cherry Fit is also composed of the components; the actual of the device, that detaches and acts as a wireless earpiece for calls; and the band itself with the dock at the middle that latches the main module. 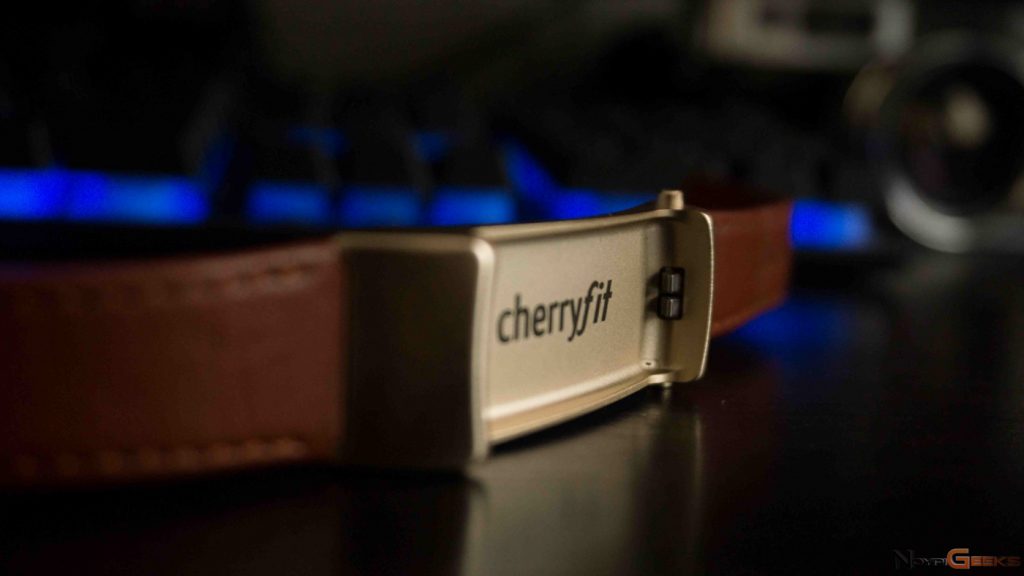 The main attraction here is the 0.96” PMOLED touchscreen, which works quite impressively. The touch feature is responsive enough, but the panel’s sunlight legibility is really bad. There’s also a single, multipurpose button. There’s also a microUSB port at the back.

For the hands-free calls feature to work, we also have two built-in microphones and an earpiece at the back.

And just like most wearables, the Cherry Fit is also splash and dustproof. I tried washing my hands with it braving the rain with it, and it still worked fine. Going further like showering or swimming with the device is really unadvisable. 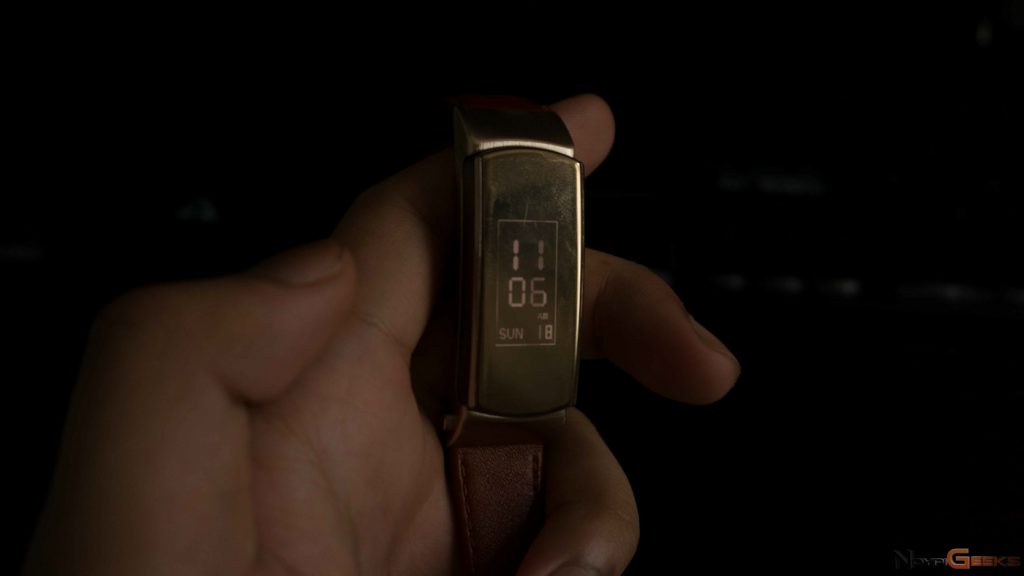 Overall, the Chery Fit elegant looks make it seem like a hybrid device; a wearable for fitness that still has that subtle, for day-to-day use device.

Features and the Mobile App companion

To start, you can download the CherryFit app from the Google Play Store (unfortunately, the device only works with Android devices), connect your device via Bluetooth, then launch the app. From here you can pretty much manage all the setting to the wearable itself, plus it also displays all of the data and activity-tracking that the Cherry Fit has gathered.

There’s really nothing new with the Cherry Fit’s features. The Bluetooth disconnection feature is a big help for those forgetful folks; flip wrist to wake screen is also handy. However, I thought it was a hit-or-miss at first, but after hours of testing tirelessly, you need to flip your wrist at a certain speed and force, which is just a subtle motion. After a few practice, I was then able to use that feature with a 95% success rate of working. Ha! 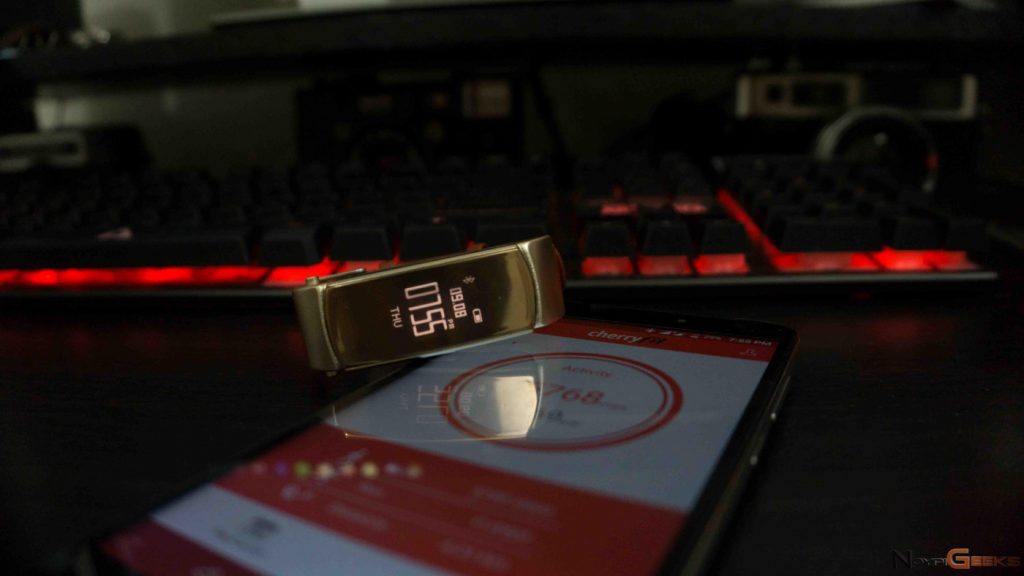 You can also adjust the screen brightness in the app. The device can also do alarms, weather push, and receive notification from the app of your choosing.

The watch’s interface itself is pretty straightforward. Swiping vertically reveals everything that the device has to offer. The first slide houses the watch face, with five available faces available and can be changed by tap-and-holding the display.

The few other pages have the calories burned counter, steps counter, and a running feature that you need to initiate before going out for a jog to monitor your performance. For a better look at the date, you can easily switch to the smartphone app, which it will then display all your records, complete with daily, weekly and monthly views. And just like everyone else, you can also set goals to really help you strive towards fitness. 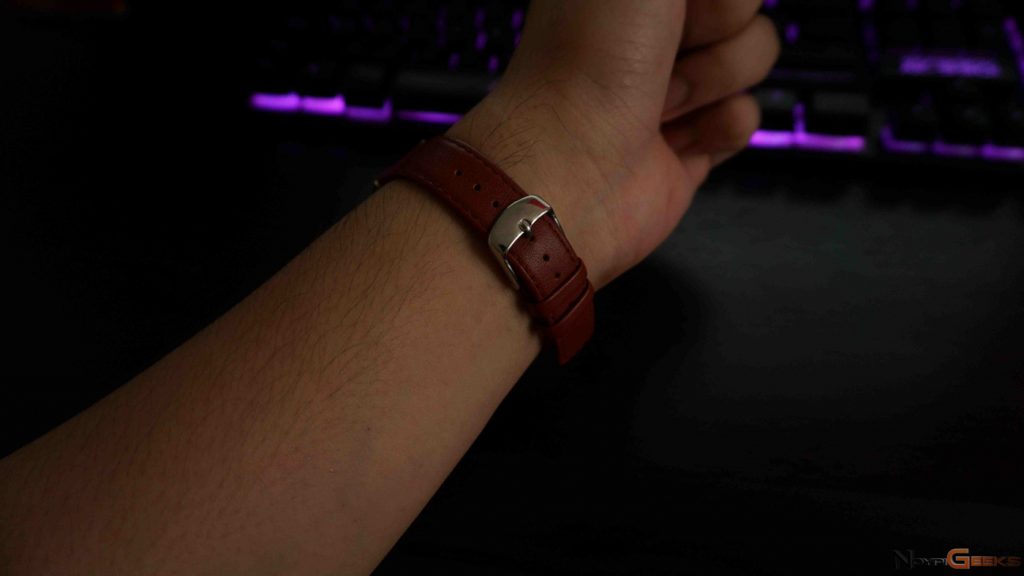 The accuracy of the sensors is really hard to tell. To test it out, I compared it with the iPhone 5S’ activity tracker (There’s a dedicated chip inside the smartphone that helps for better counter accuracy). Had both of the device’s walk counter set back to zero, and held the iPhone in the same hand where the wearable is on. And the result, as you can see in the image below, aren’t too far from each other. In my opinion, accurate figures are really hard to obtain in this type of devices. But nonetheless, a close estimation is still usable.

I’ve also tested the hands-free calls feature of the device. The results are pretty much okay, depending on the environment that you’re making your calls. Volume is loud enough, but the microphone is not that great. During one of my tests, the party on the other line was complaining at the low volume, which required me to make my voice louder than usual. 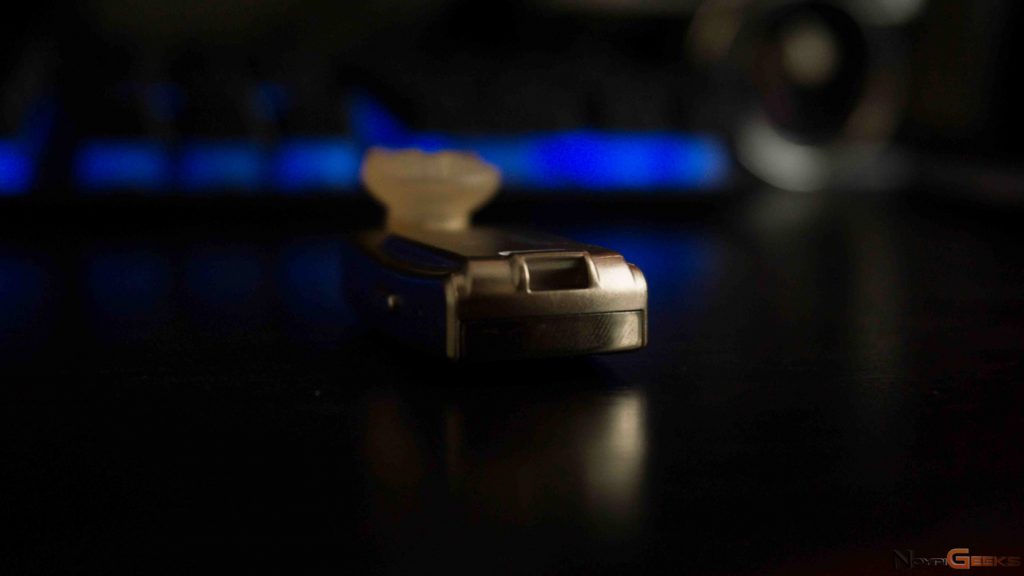 The Cherry Fit has a 100mAh battery, and thanks to its PMOLED display, battery life is pretty impressive.

Also, thanks to its super small battery, the device can be recharged back to 100% in just a couple of minutes. 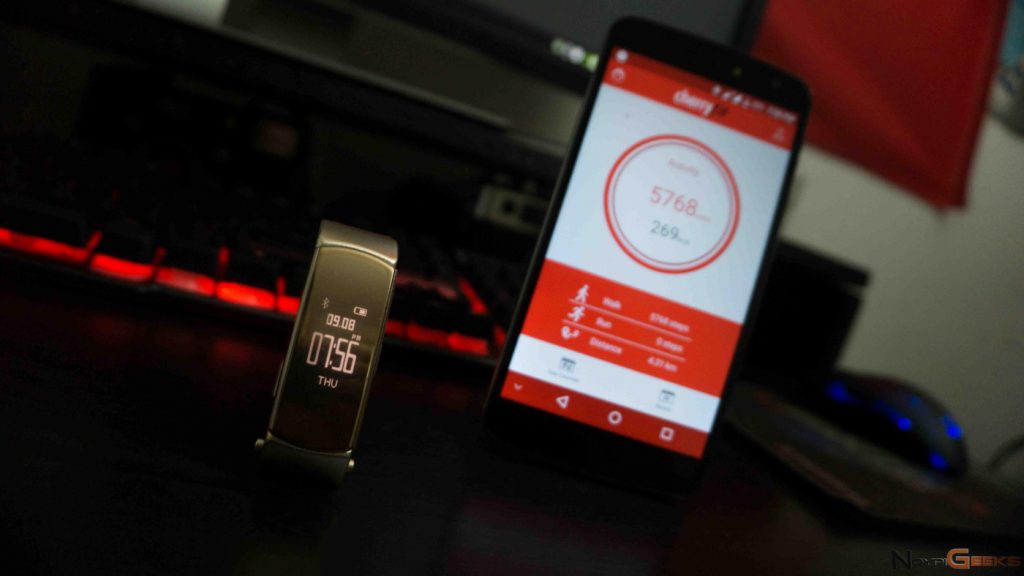 Less is more. That’s something that Cherry Mobile had in mind when they offered the Cherry Fit. The clean interface and design, plus a useful smartphone companion app really made it very interesting.

But I think the Php3,499 asking price is still a bit steep. The device is really worth considering, we’ll just have to wait for a price cut.