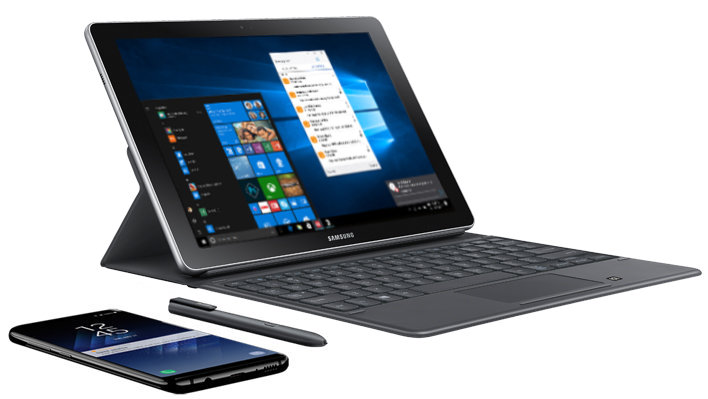 From the first look, it’s kinda hard to distinguish the Galaxy Book 2’s design over the Surface line, but that’s probably because Samsung took a lot of inspiration from it.

Powering the Samsung Galaxy Book 2 is Qualcomm’s new Snapdragon 850 processor with support for always on and always connected platforms. It boasts up to 30% faster processing and graphics performance, as well as up to 25% better battery life compared to the previous generation. According to Samsung, this machine supports gigabit-class LTE and it’s capable of lasting for at least two work days before it runs out of battery. Its speakers also has Dolby Atmos support and it’s tuned by AKG.

The Samsung Galaxy Book 2 has a new kickstand which is reminiscent of the one from the Surface Pro. It can adjust the 12-inch OLED screen to any angle the user wants and its keyboard attaches magnetically to the bottom part of the display.

Out of the box, the Samsung Galaxy Book 2 is limited to Windows 10 S. However, those who want to upgrade to the full desktop experience can do it for free. Samsung also included a traditional fingerprint reader on back of the screen for security purposes and quicker log-in.

The Samsung Galaxy Book 2 has a price tag of $999 (~Php53,700) and it will be available beginning the 2nd of November in Microsoft and Samsung’s official websites. It will roll-out in other stores in the coming weeks.