The popularity of PC gaming has reached an all-time high in the last couple of years. As a result, the demand for computer hardware has also increased at a rapid rate.

ASUS’ Republic of Gamers (ROG) brand has been one of the leaders in this category. The company offers pretty much what every gamer needs to get going. From gaming peripherals, computer components, desktops, and laptops.

Here we have the ASUS ROG GL503VD, an unassuming portable PC machine that aims to satisfy all your gaming needs for almost half the price of most high-end laptops.

And since here at NoypiGeeks I do a lot of photo and video editing, this review will be for those who are creative first and a gamer second. So, let’s start, shall we?

Finally, the ROG line has finally matured in terms of their design choices. Compared to their previous gaming notebooks, the ASUS ROG GL503VD has a more subtle, slightly more minimalistic design to it. Unlike the old GL500 line and the others.

The ASUS ROG GL503VD looks a bit identical to the ROG Zephyrus. The brushed-metal lid provides an extra level of stylishness. The slant curvature and the ROG logo that glows in red says that this is indeed a gaming laptop despite its elegant design. 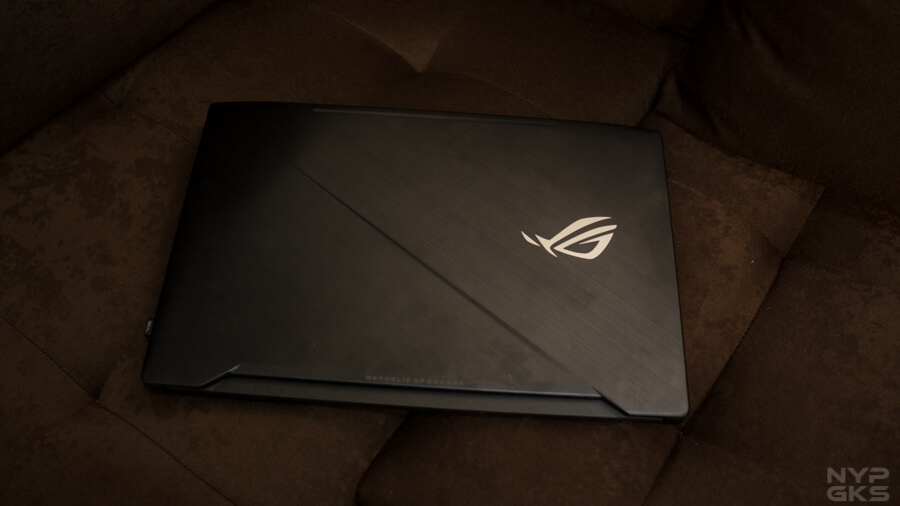 And besides looking good, this machine also feels really well-built. Both the palm rest and keyboard area feels sturdy and I didn’t experience any flexing during my time with it. It also has some sturdy and well-made hinges — you can instantly open the lid with only one finger.

Right in front, there’s the vent for airflow. The grills inside are tinted in red — which is another subtle hint for everyone that you’re rocking a gaming notebook. 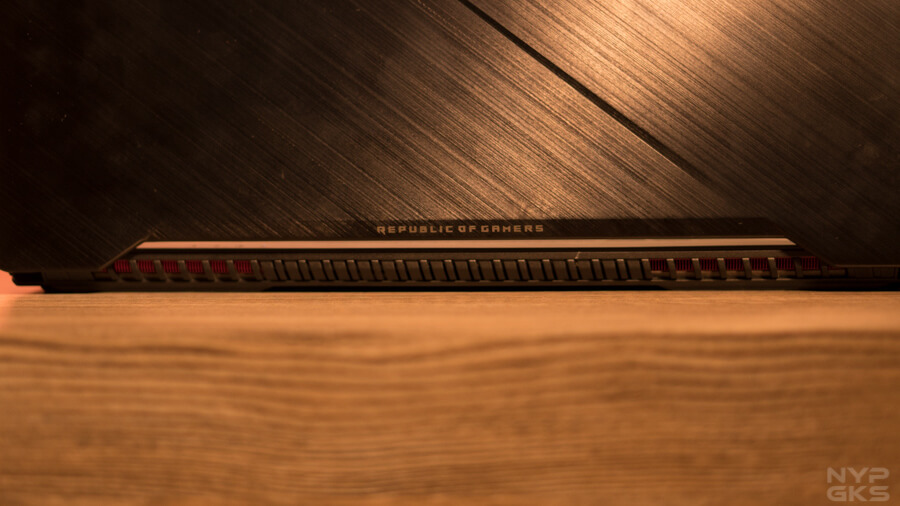 At the bottom, we have four rubber heats, some vents, and an easy-open lid so you can quickly add more RAM or swap the hard drive.

The ASUS ROG GL503VD isn’t the chunkiest laptop that I have ever seen, but it’s also definitely not the most lightweight. This laptop is 38.4cm in width, around 2cm in thickness, and weighs 2.30kg (with battery). Despite that, it’s still relatively thin when compared to the other laptops in its class.

I do suggest you carry it with a backpack (I think ASUS is giving a free one when you purchase it) rather than a messenger bag like I did, so the weight will be equally distributed in your shoulders. Trust me, it’s a burden to carry for an extended period of time.

Going back to the keyboard, the ASUS ROG GL503VD was able to accommodate a number pad thanks to its large 15.6-inch FHD IPS screen which left a lot of space. What we have here chiclet-style keys, which offers decent tactility with a short travel distance when pressed. I wrote this entire review with the machine itself and I got easily used to these type of keys — despite the fact that I use a mechanical keyboard as a daily driver.

Other than the normal keys, there are also four dedicated hotkeys on top. There are the volume controls and a mic mute button for those who do voice chat on multiplayer games. You can also spot a dedicated ROG button that summons the ASUS ROG Gaming Center (more on that in the software section). 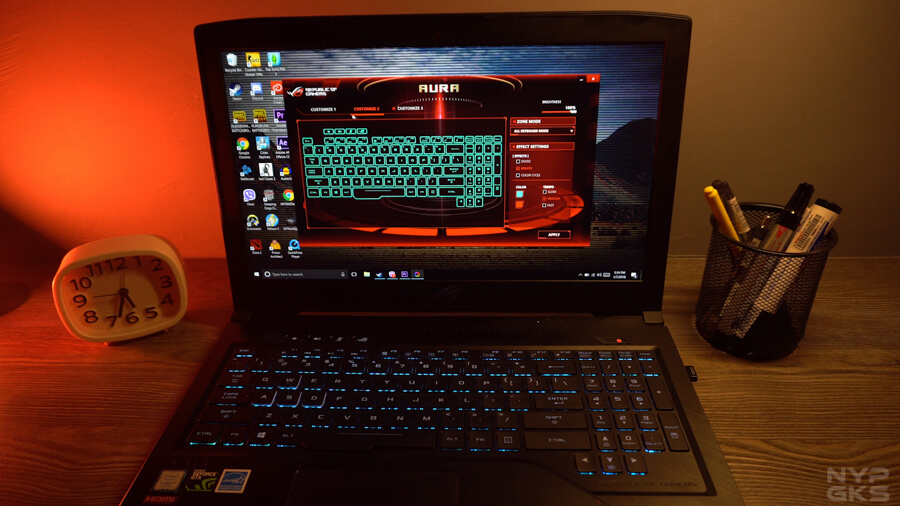 And of course, it wouldn’t be a real gaming laptop without RGB lighting. The keyboard has 4-zone RGB lighting, which can be customized on the ROG Aura Core app built right in on the system.

Right below the keyboard is the trackpad. It uses Window’s precision drivers so you know it works well. Unless I’m gaming, I can pretty much live without using a mouse.

ASUS also crammed in two loudspeakers on each side of the ROG GL503VD. They are located in the lower part of each corner, projecting them almost directly in each ear. And thanks to this setup, it was able to deliver good audio separation even without using headphones. It’s perfect for playing games like PUBG, where footstep’s direction is one of the key parts of victory. 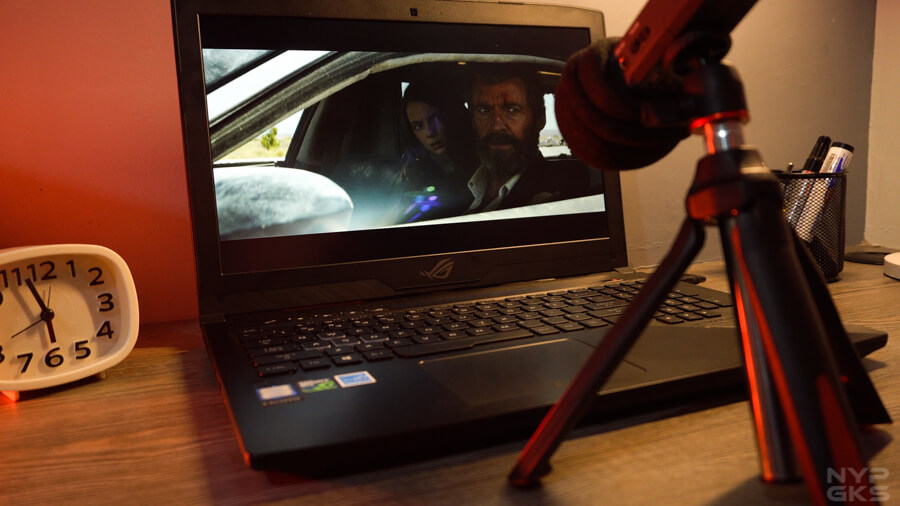 In the top part of the laptop, there’s an HD webcam. As expected, its quality is pretty garbage in contrast with other selfie cameras that we’re used to. But still, it’s usable for video calls, or if you’re just starting your own streaming channel. Anyone serious about streaming shouldn’t probably use it, though.

The ASUS ROG GL503VD is also complete with a lot of ports. To be honest, some of them aren’t really necessary. However, it’s nice to see that it’s there in case there’s a need for it. On the left corner, we have the power in port, an RJ45 LAN jack, a mini display port, HDMI 1.4, two USB 3.0 ports, and the headphone-out/audio-in jack. 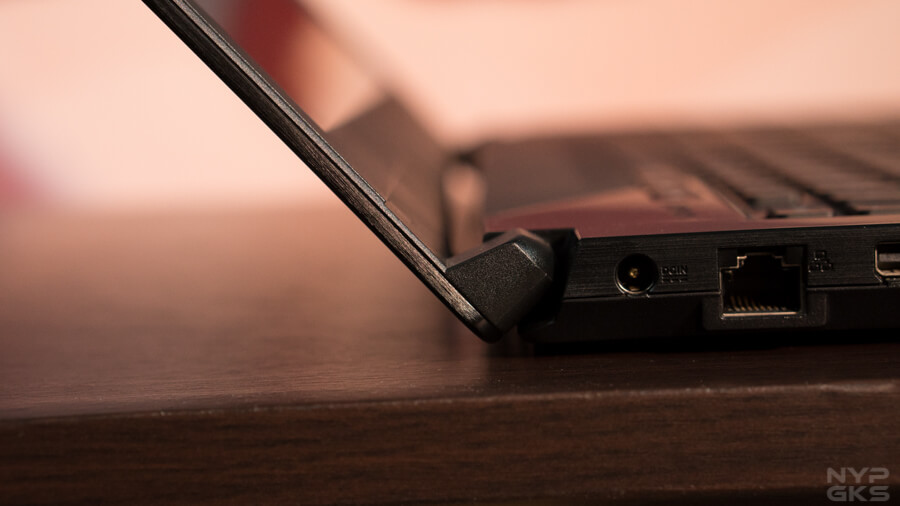 ASUS used a 15.6-inch IPS Full HD screen on the ROG GL503VD with 300nits of brightness, anti-glare coating, 60Hz refresh rate (also available in 120Hz) and 72% NTSC. This configuration is something you might want for a good gaming and productivity machine. 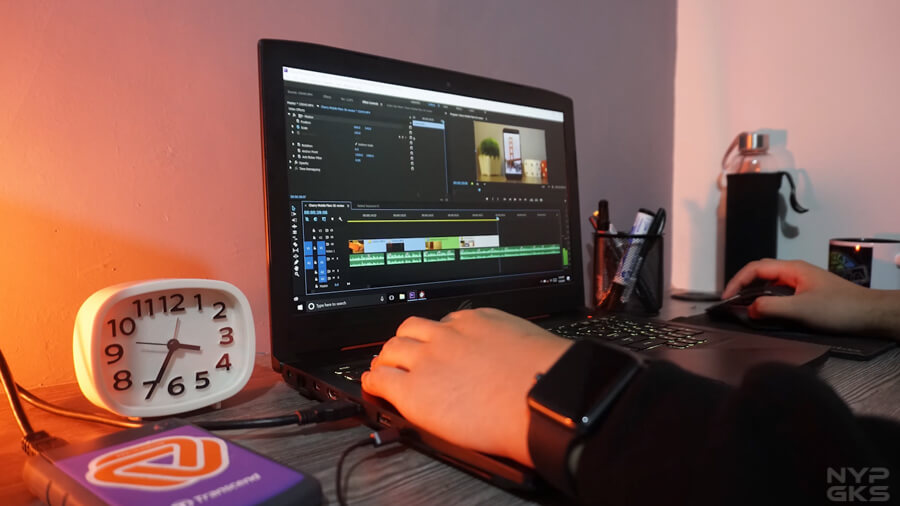 The screen real estate is large enough to provide an immersive gaming experience. Or, if you’re doing work, you can have two windows displayed side-by-side without losing too much detail.

It might not have an ultra-fast refresh rate, but what I really liked about it is its good and almost perfect color accuracy. This is one of the crucial parts of every content creator — especially those who do a lot of color correction and grading.

The machine we have here is powered by a 7th-Gen Intel i7-7700HQ processor, with 6M cache and a base clock of 2.8GHz that can go up to 3.8GHz. On the graphics side, it sports an Intel HD Graphics 630 integrated graphics and a separate NVIDIA GeForce GTX1050 for more intensive tasks.

The ASUS ROG GL503VD also has 8GB of DDR4 2400MHz RAM that can be expanded up to 32GB. And storage wise, this configuration has 128GB of M.2 SSD, enough to house the OS and boot up the entire system in just seconds and store critical software. All other games and media can be stored in the 1TB 7200RPM SATA hard drive. 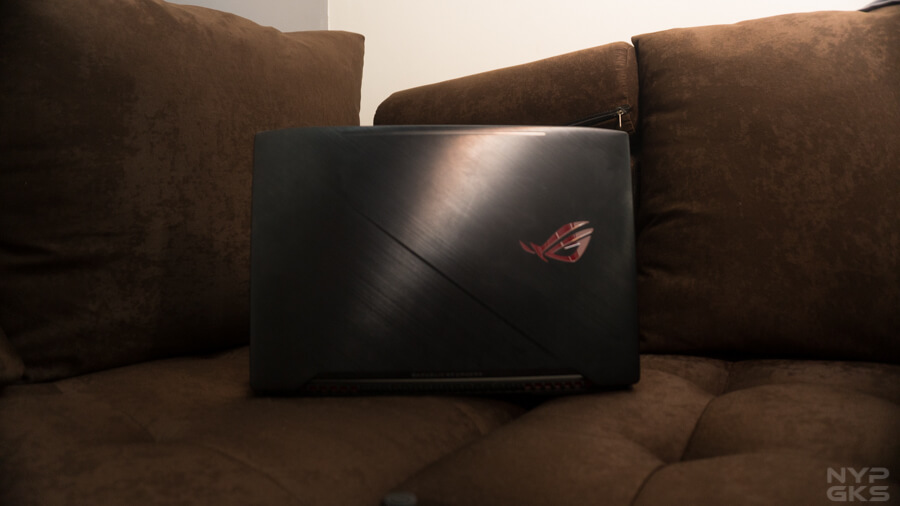 As stated earlier, we primarily use our machine for video editing. And on that regard, I can safely say that ASUS ROG GL503VD is really good for creatives. Together with its color accurate display, both photo and video editing experience on this laptop were pretty satisfying.

However, for its price tag, I was still expecting something more to it. It does struggle a bit in playing my timeline in Premiere Pro, especially with effects applied. But at the end of the day, I was still able to finish an entire project without any hassle. 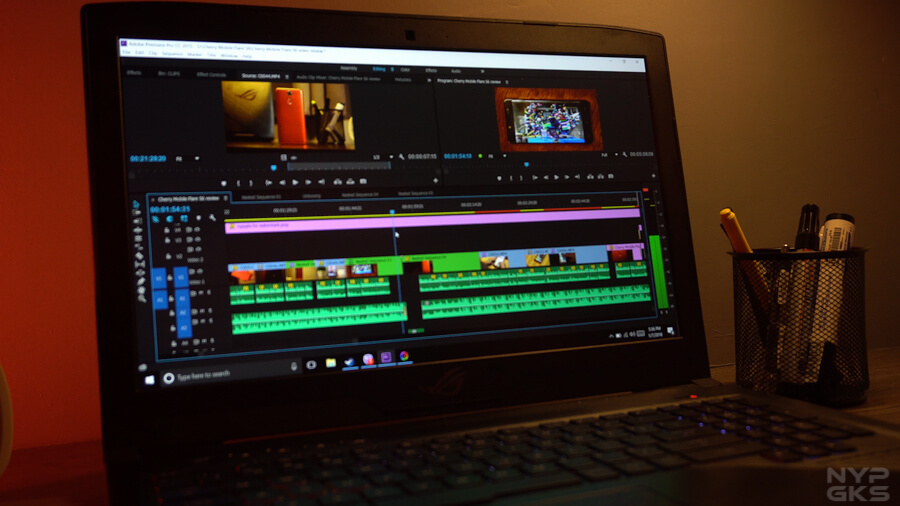 And speaking of finishing a project, the ASUS ROG GL503VD rendered my 5-minute 1080p video project for around 8 minutes. That’s satisfyingly fast for this kind of configuration.

Now, let’s move on to gaming. First, we fired up Player Unknown’s BattleGrounds. It finally passed the Beta stage a couple of weeks ago, so the game is now more stable. When in Ultra graphics settings, the GL503VD managed to have an average of 30fps. 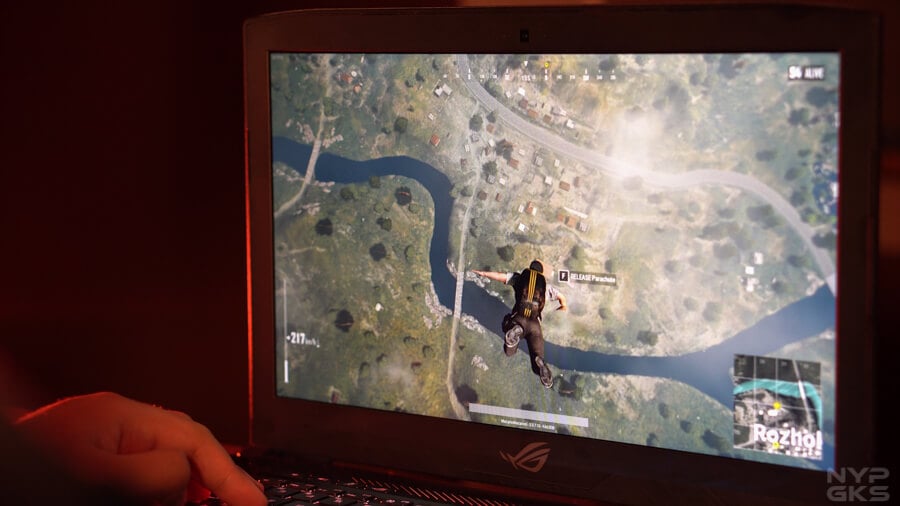 But if you want to achieve that extra level of smoothness, you don’t have to go all the way down. Going down a notch, this machine was able to to have an average frame rate of 58fps under High graphics settings. The difference in texture quality and what not are barely noticeable. But I’m pretty sure you’d really appreciate the drastically improved smoothness in frame rates.

I also tried other game titles with maxed-out graphics as a test for the ASUS ROG GL503VD’s gaming prowess. Counter-Strike: Global Offensive had an average of 140fps and Grand Theft Auto V got around 50fps. Take note, though, the GeForce Experience app is capping the frame rate to 30fps when you’re in battery mode to conserve juice. So if you want to play games seriously, we’d recommend plugging into to the wall for optimum performance. 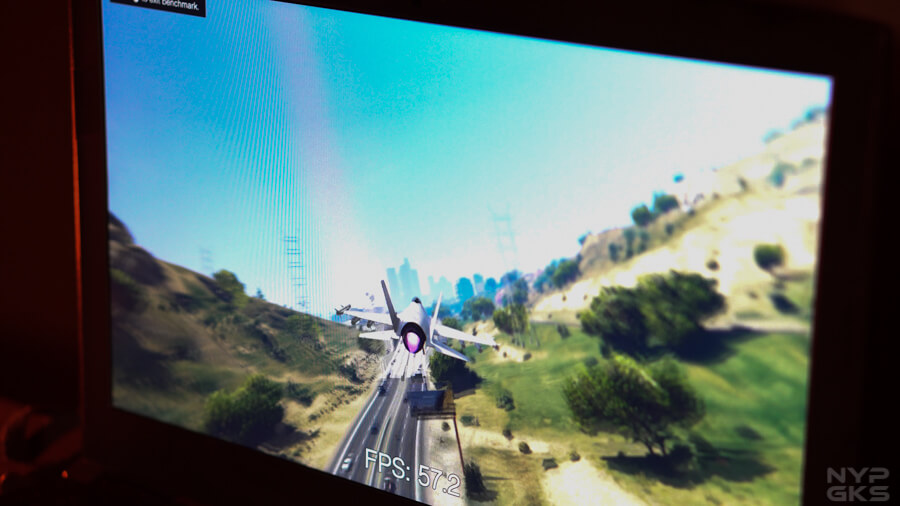 Now, let’s talk about thermals. Inside the ASUS ROG GL503VD are two fans that cool both its CPU and GPU. When handling heavy load, the fans get all crazy and really loud.

But during my time with it, I didn’t feel any extreme heat on my fingers while typing. However, you can feel the increase in heat in the area above the keyboard. You can also feel it in your lap if you’re not using it on a table.

To sum it up, the Intel i7-7700HQ processor and the latest GTX 1050 graphics card make a pretty sweet combo. However, for the price, you can’t blame us if we’re still quite disappointed that it isn’t the GTX 1050 Ti, or better yet, a GTX 1060. Other competitors in the market have a slight advantage in this regard.

Battery performance has never been the strongest feature of any gaming laptop. And the ASUS ROG GL503VD is no exception with its 64Wh battery.

Like I said earlier, I created an entire video project on this machine via Adobe Premiere Pro. After an hour and a half of video editing, the laptop went from 100% to 10%.

On the other hand, I tried playing Player Unknown’s BattleGrounds until it reached the critical battery mark. This is with the graphics set to maximum, but with GeForce Experience’s 30fps cap. The brightness is at 50%, with a headphone plugged in.

Unsurprisingly, the battery warning already popped up in just 1 hour and 6 minutes. 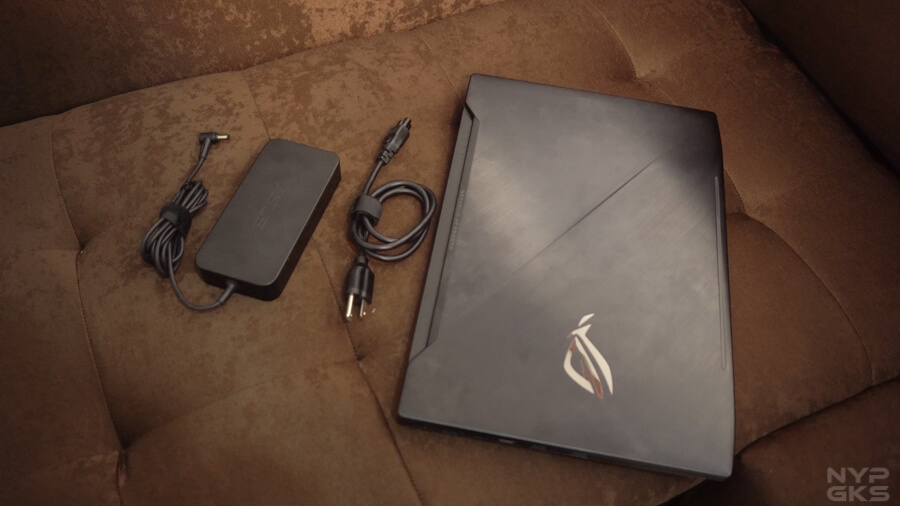 It appears that ASUS has found the right balance with the ROG GL503VD. Unlike most of the competition, the GL503VD is more than just a gamer’s machine.

As I stated earlier, the ASUS ROG GL503VD has a good display, which is a rare feat in a lot of gaming laptops today. Also, its minimalistic and subtle design still has the for gamers feel to it but has a refreshing look that may also appeal to a lot of professional users. 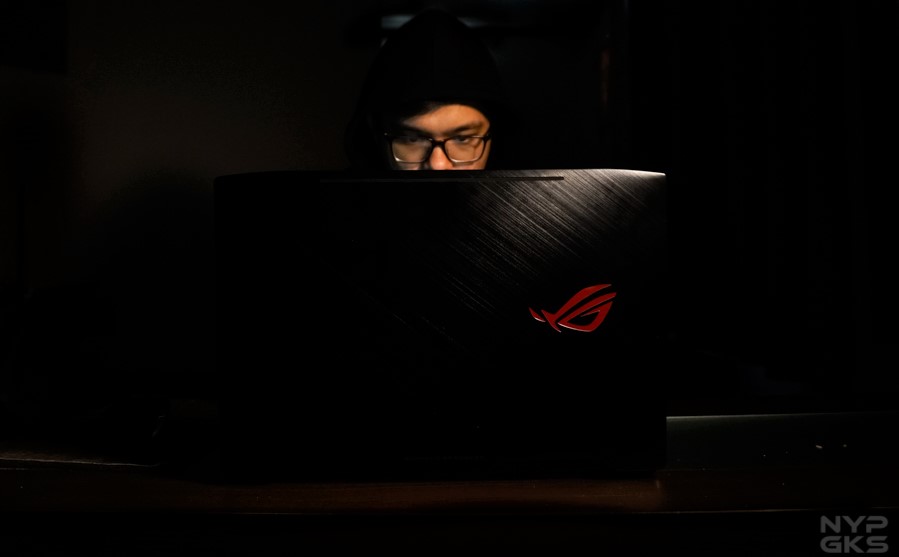 The performance might not be the best of all, but it can run a lot of triple-A titles at smooth frame rates and stunning resolution. The speakers are also great and it can perform very well when watching videos.

However, the loud fans when the machine is under heavy load might annoy some people. Its multitasking prowess isn’t really that impressive, so it might force you to throw in an additional RAM stick for better performance. We might just be nitpicking, but it’s still worth noting.

Sure, you can build a more powerful desktop PC for its price tag of Php69,995. But if a portable gaming machine is what you need, or you’re a content creator who does a lot of field work, then you might want to check out the ASUS ROG GL503VD.