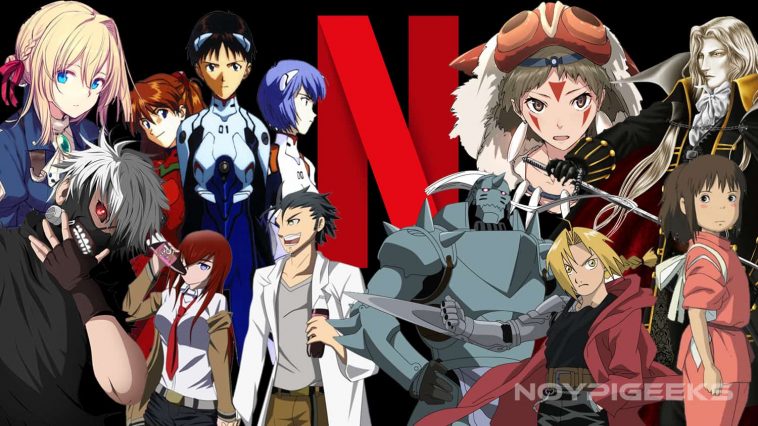 The formidable palate of anime lovers has been adapted by most streaming platforms. From time travel, spirit interaction, energy orbs, and immortality, everything can be found in Netflix’s breathtaking library of action-filled adventure with a bit of drama and lesson animes.

Among the irresistible and vast selections of anime, choosing which to binge-watch first is quite hard. No worries, as we will be highlighting the top 9 anime picks that are readily available on Netflix.

Revolving in the story of the consequences of Edward and Alphonse’s sin to resurrect their demised mother, the anime will effectively portray how the universe will react if we violate the law of nature. On their journey to redeem themselves from the dark fate of their sin, they will also face the forces of an authoritarian government and black magic.

After the success of its first series, the Full Metal Alchemist: Brotherhood will now explore how to go against fascism with science and faith. There are few comedies throughout, so you will surely enjoy the roller coaster of emotions even better than the last version of this anime you’ve watched.

As on the newest sci-fi offering in Netflix’s anime library, Violet Evergarden tells the story of how a half-human and a half doll with the capacity to absorb and possess the emotions and memories of people. This is not just another fantasy story that you may have known since it also has good flashback storytelling of Violet’s history.

Later on, it will be revealed how she was a former child of war who lost her arms and replaced with a robotic cyborg machine. As she goes back to society despite her bitter past, she will now be searching for her life purpose by writing the stories of people she will encounter.

Set in the Japanese pre-historic era, the story of Princess Mononoke will let us rekindle the love for nature and our faith in the Creator before the civilization started building skyscrapers and factories. It will also expose the aftermath in the destruction of forests, pollution on bodies of water, and the killing of wild animals as it affects the ecological imbalance in the future.

Ashitaka, the protagonist of the anime, acts as the peace advocate between the people and nature. He will be accompanied by San, a mysterious, nature-loving girl who was raised by wolves in the woods. They will be resolving the conflicts in the advancement of the age of technology and the annihilation of spirit gods.

Reviewed as one of the most promising and charming anime by Netflix, Steins;Gate will reconcile time travel and the tenets of science & technology. Rintaro Okabe is the show’s main character who is once a self-proclaimed ‘mad scientist’ who will create gadgets and weapons from his laboratory shop just above his apartment.

His life changes as he cracks the mystery of time travel from a banana and a microwave set which will be the gateway for the time and space continuum. This may look like a child’s show on the first few episodes but it will get more complicated as it develops. There will be petty fights from missing foods to winning a bloody battle that may change history as we have known.

Staged from the great 80s to ’90s, Netflix will relive Warren Ellis’s vision on his video games. With just four episodes as of this date, it will explore how Dracula will go rampage against humanity after the death of his beloved wife. This needs a lot of parental guidance for young audiences as there will be human and demon blood-shedding all over with nasty eating habits of vampires to catch and kill their prey.

The anime is developed with good graphics quality and a smart script as it is commissioned by Netflix themselves. Recent news has reported that the second season is on its way on the platform before the end of 2020 due to its growing fan base.

This Netflix anime series features the bloody city of Tokyo where ghouls and humans live together, but not peacefully. Amidst the busy people, these creatures exactly look and talk like human beings but feed on the flesh of their prey. The adventure begins as the Commission of Counter Ghoul, the group that captures and kills the ghouls relentlessly created a new weapon.

It highlights Kaneki, the story’s central figure who is half-human and half-ghoul. He will be forced to enter the residences of the Tokyo ghoul to battle against them. His strategies for deductive thinking and weaponry skills will make the creatures fear him at the end of the story.

As one the topnotch magical and thought-provoking series in Netflix’s anime lineup, it will feature the story of a girl who lost her parents who found her way to the land of elemental creatures. She learns that she has a special connection with the demons, witches, and spirits who are living there.

Young viewers can learn how to be responsible despite misfortunate events through love, friendship, maturity, and faith. It is packed with an amazing soundtrack and animation that can give goosebumps.

Going back with the classics, the 2020 version of Neon Genesis Evangelion will take all the viewers whose age ranges from the ’30s to ’40s. Just like the original anime, the plot will explore the journey of Eva who learns his supernatural abilities when he turned 14 to save the world from chaos. It will also remind us of what it costs to redeem nations from its downfall due to the formidable mistakes of its leaders.

Then, the story transcends to Shinji Ikari experiencing depression and trauma that he questions God’s existence amidst the apocalypse. Some analysts have reviewed the anime for an experience of religiosity despite the frustrations.

Netflix made the right decision to include a mecha-genre anime in its library. With its futuristic setting, the Knights of Sidonia will feature what remains in the society of humans after hundreds of years. It will also question if human survival is still possible while robots and artificial intelligence is running the world’s government.

There will be several fights between the battleships of aliens, beasts, and the remaining human survivors inside the Sidonia ship. The protagonists of the story will find a way to turn the tides against their enemies by using their technology against them.

How about you? What’s your favorite anime? Feel free to share your own list in the comments section below.