It was just like yesterday when we were talking about the issue Samsung faced back in 2016 when the Galaxy Note 7 fiasco happened. It cost the company millions of dollars and a dent in their solid reputation. Now, it seems like something is also happening to its successor, the Galaxy Note 8.

Samsung has released a report about the incident and promised that it won’t ever happen again. In fact, they took necessary precautions in carving the successor to prevent any issues when it gets to the consumers. The device has a significantly lower battery capacity compared to previous generations but it still retains the Adaptive Fast Charging technology. 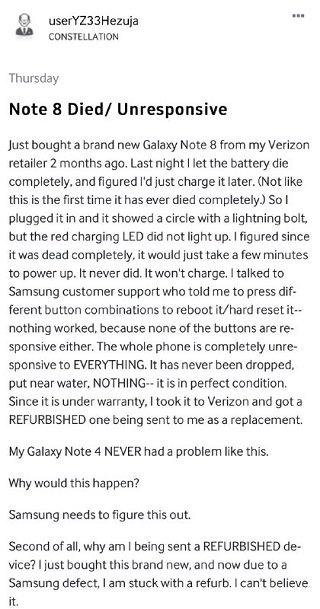 Several reports from users in the Samsung Community Forums have shared that their Galaxy Note 8 can no longer be charged after it hit 0%. One user even uploaded a YouTube video to demonstrate the issue. Apparently, it happens when the battery is fully depleted. After that, it’s no longer taking a charge, even though it’s left plugged-in for a long time.

Samsung has not issued a statement regarding the issue as of the moment, but it’s reported that they’re working on it on a case-to-case basis. Those who will qualify are given either refurbished or brand new Note 8 units.

Anybody here who has experienced the issue? Let us know.