The Vivo V15 Pro is expected to launch in the next few weeks. With that, we’re starting to see more and more leaked details about this upcoming device.

Earlier, an image of a supposed clear case of the device went out in the wild. And partnered by the official event invitation that Vivo sent out to the media, we conclude that the Vivo V15 Pro will sport a pop-up front-facing camera, with more than two shooters in the back.

All of that information is now confirmed by the leaked promotional poster that was obtained by 91mobiles. The material is meant to announce the pre-order status of the device, while also revealing its full design and some key specs.

One key takeaway here is the 32-megapixel pop-up selfie snapper. While the product images suggest that it will have three cameras on the back. Although it’s still unknown what this trifecta of cameras consists off. 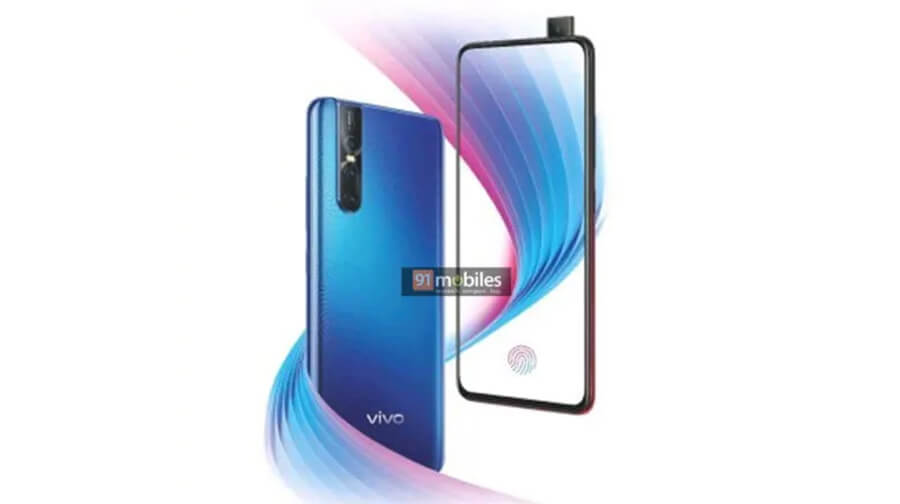 What we do know is that they are placed in a vertical orientation wrapped in a single glass, which seamlessly starts with the periscope front camera on the top. Something that Vivo already implemented on the Vivo NEX S.

The front is being dominated by the screen, with ultra-thin bezels, probably at around 6-inch to 6.3-inch. It will also sport an in-display fingerprint scanner like the V11, which means that it may sport an OLED panel.

Since it still belongs in the Vivo V series, we don’t expect the Vivo V15 Pro to come with a flagship Snapdragon 855 processor. Instead, we might see a Snapdragon 710 or a Snapdragon 675 chipset powering this device.

We’ll get the facts from those speculations once the device go official on February 20.