ASUS had a different tone in their Computex 2018 presentation. Aside from releasing new hardware for their PC line, the company went to the stage to release the first smartphone under their Republic of Gamers (ROG) brand — the ASUS ROG Phone.

ASUS makes some of the most prominent gaming hardware in the industry today — from their laptops, desktop PCs, and peripherals. And now that they released a phone under the ROG brand, the company is using everything they’ve learned from the gaming industry to the smartphone world.

ROG products are well-known for their ludicrous hardware and a really aggressive-looking design. So, expect nothing less from the ASUS ROG Phone. This handset packs a lot of top-of-the-line specs, ROG’s design language, and a slew of mouth-watering gaming accessories. 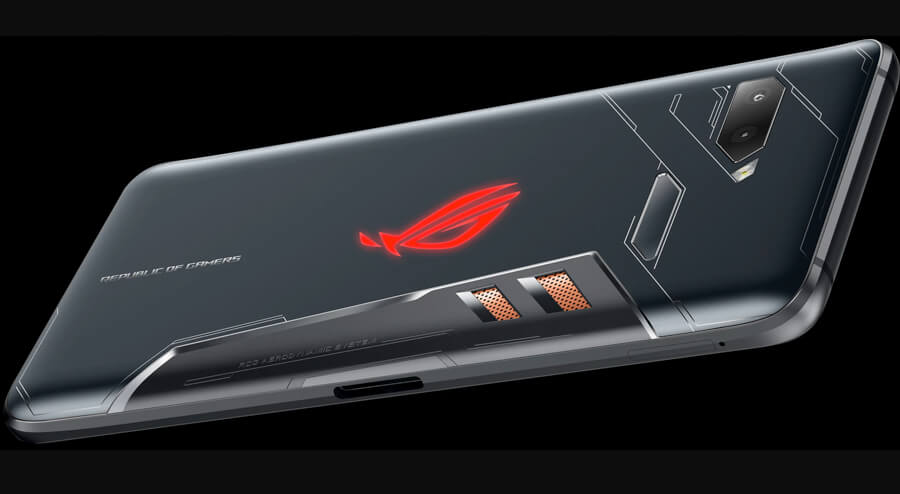 The first thing that really caught our attention is the design of the rear panel of the ASUS ROG Phone. There are some noticeable etchings on the diamond-shaped camera lens, plus an unusual shape for the fingerprint scanner.

There’s also ROG’s logo which has RGB lighting. You can customize it using the ASUS Aura sync app within the device — the same RGB software they use in all of their other products. Moreover, there are two grills at the back of the ASUS ROG Phone that looks like air vents for its vapor-cooling technology. 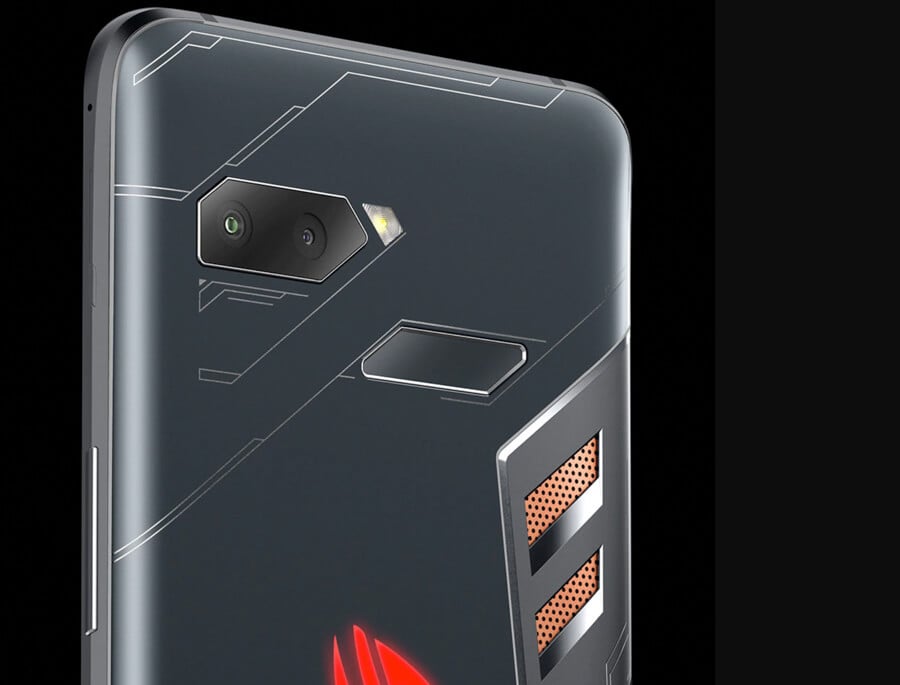 But if the ASUS ROG Phone is still running hot for some reason, ASUS also came up with an AeroActive Cooler accessory. It attaches to a dedicated port on the side, which will enable its built-in fans that dissipates heat. It also comes with a headphone and charging port that allows the user to plug it in in a different orientation so they can play better in landscape mode. 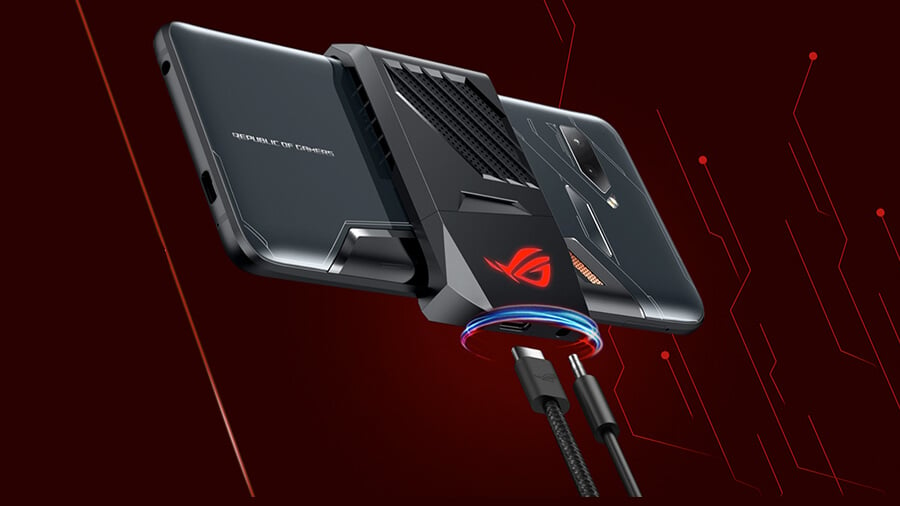 Other than the attachable cooler, ASUS also introduced the Mobile Desktop Dock, which will allow the ROG Phone to work like a real desktop PC. It has a display port, Gigabit Ethernet, 5.1 speaker output, tons of USB ports and more. 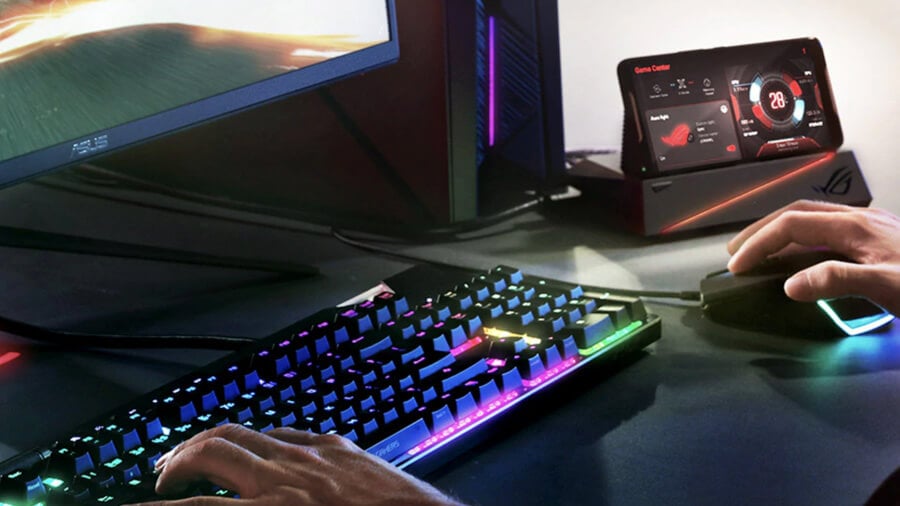 In addition, ASUS announced the TwinView dock — which is like a smartphone controller on steroids. It sports a secondary display to provide more screen real estate for games or multitasking. It also has physical buttons, two haptic feedback engines, cooling mechanism, and a 6,000mAh battery that can power both itself and the ASUS ROG Phone. 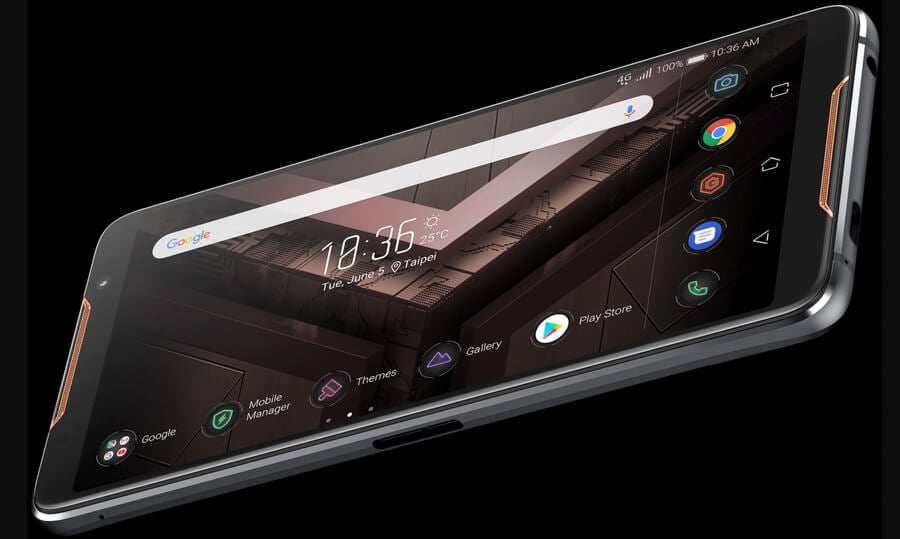 But if you want to go big, you can hook up the ASUS ROG Phone with the WiGig dock. It has a low-latency WiFi feature that allows the phone to be projected to a large TV without wires — replicating the experience of laidback console gaming in a living room.

Speaking of gaming, the ASUS ROG Phone is equipped with a special Qualcomm Snapdragon 845 chipset that’s overclocked to 2.95GHz. It also comes with a configured Adreno 630 graphics, 8GB of RAM and 512GB od UFS 2.1 storage.

The display of the ASUS ROG Phone is a 6-inch AMOLED panel with 2160 x 1080 pixel resolution, 108.6% DCI-P3 color gamut coverage, and an impressive 90Hz refresh rate with 1ms response time.

ASUS also brags about its two ultrasonic AirTriggers that allows the gamer to easily control some games by lightly tapping each top corners of the device when in landscape mode.

Now that the ASUS ROG Phone is in the mix, it is expected to give the Razer Phone, Xiaomi Black Shark, and ZTE Nubia Red Magic a run for their money.

The ASUS ROG Phone is expected to arrive in the third quarter of 2018. The official pricing is yet to be announced. But judging by its full blast hardware nature, this is poised to be one of the most expensive smartphones once it becomes available.