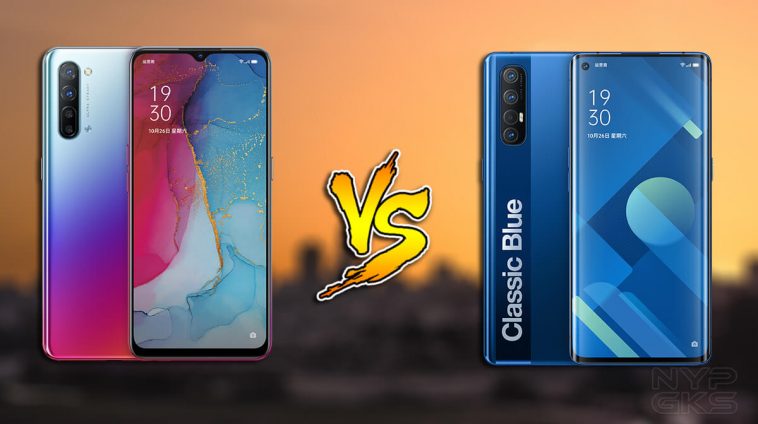 You might be asking, what’s new with the Reno 3 Series? Well, it’s only 5G Connectivity of course! The OPPO Reno 3 is the base unit of the new series but it certainly doesn’t look like it. The phone has premium features such as a quad-camera setup which has a slightly better main camera versus the Pro variant.

Meanwhile, the OPPO Reno 3 Pro is obviously the supposed better version of the base unit. Though the Reno 3 has a slightly better main camera, the Reno 3 Pro has a 13-megapixel telephoto camera with a 5x hybrid optical zoom feature. Both phones seem to be very similar to each other but are that really the case? How do they differ from one another? Is the difference in price between the two phones justified? These are the questions we would like to answer in our OPPO Reno 3 vs Reno 3 Pro specs comparison.

Update 3/23/20: Added specs for the international/Philippine model of the Reno 3. As you can see, though both phones share some similarities, but they do differ in some key areas. Another difference between the two phones is their rear cameras. The Reno 3 has a 64-megapixel main camera, 8-megapixel wide camera, 2-megapixel macro camera, and a 2-megapixel monochrome camera.

Unlike the OPPO Reno 3 Pro which only has a 48-megapixel main camera, but makes up for it with its 13-megapixel telephoto camera that has a 5x hybrid optical zoom, 8-megapixel ultra-wide camera, and its 2-megapixel monochrome camera. As said before, though they have differences, they’re still somewhat similar to each other. To name a few, these similarities include their displays, front cameras, memory and storage capacities, and battery size. Display-wise, they both have a 6.5-inch screen and an AMOLED panel. While on the subject of front shooters – both the OPPO Reno 3 and Reno 3 Pro have a single 32-megapixel selfie cameras.

Storage and memory wise, the two phones have an 8GB and 12GB RAM variants to choose from along with a storage capacity of 128GB, and an additional 256GB storage variant exclusive for the Pro. Battery wise, they are both packed with a 4,025mAh battery with VOOC 4.0 Flash charging features. They will also ship with 5G connectivity, thanks to their well-equipped processors.

Other minor features they both have include a USB Type-C port, face unlock feature and an under-display fingerprint scanner. I would have to say in this spec comparison, the Reno 3 takes the win over the Reno 3 Pro. Its main camera, better processor (based on recent benchmarks) and cheaper price provides too good of a value compared to the Reno 3 Pro.

Although, if you prefer having a feature-packed rear camera, having a bigger storage option and you’re willing to spend a few extra bucks? Then the Reno 3 Pro might be the one for you.