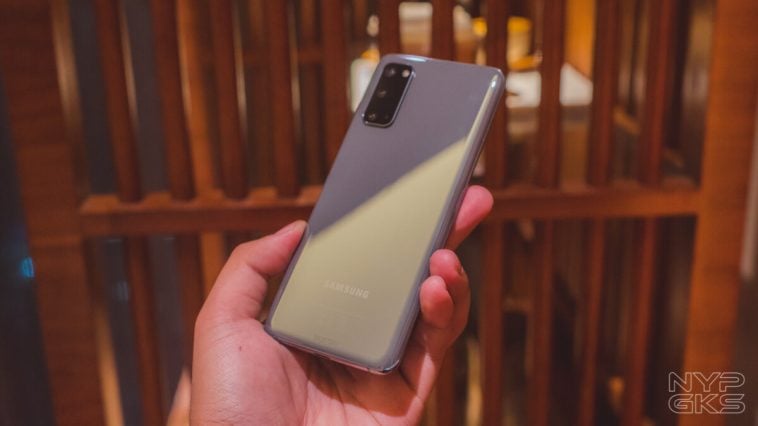 The Galaxy S20 series has finally arrived. We were able to spend some time with the vanilla Samsung Galaxy S20 model, so, we’ll share with you our initial thoughts about it.

As you probably know by now, the Samsung Galaxy S20 is the smallest of the three variants. It only has a 6.2-inch screen, which made it the most compact and comfortable in the hands. Even people with bigger hands like me will feel at home on this device.

But despite its smaller size, it uses the same Quad HD+ Dynamic AMOLED screen. The best part is, Samsung has finally opted to use a 120Hz refresh rate screen. A feature that has been in some flagship devices in the last couple of months.

This made the handset feel so much faster. Even small animations like dropping down the notifications tab feel a lot more fluid. Going back to regular 60Hz screens, which other flagships have, will never feel the same. You just have to experience it for yourself. On top of the display is a punch-hole for the 10-megapixel selfie camera. It’s placed in the middle like what the Galaxy Note 10 has. The initial selfies we were able to take was good, but we’ll save the final verdict in our full review.

We also have the triple cameras on the back. All of which are housed in a rectangular camera bump that’s similar to the Galaxy A71. I must say, I’m not the biggest fan of the design. Probably because it looks similar to Samsung’s midrange line-up. It houses a 12-megapixel primary shooter with a wide aperture of f/1.8, 12-megapixel 180-degree ultra-wide, and a 64-megapixel sensor with a whopping 30x hybrid zoom. The high-resolution telephoto camera allows for a sharper digital zoom.

But if you want mind-blowing camera features, then you might be better off jumping on the Galaxy S20 Ultra that has a whopping 108-megapixel primary camera and 100x of hybrid zoom.

We’ll go in full detail about the camera capabilities of the Samsung Galaxy S20 in our full review. So stay tuned for that. Moving on, the Samsung Galaxy S20 that we’ll get here in the Philippines, as well as in most countries, will have an Exynos 990 octa-core processor, with 8GB of RAM, and 128GB of expandable storage.

In our tests, it was able to provide ultra-fast and smooth performance, which was further exaggerated by its fluid 120Hz screen. Taking pictures and browsing the interface is fast. The Galaxy S20 devices that were handed to us are engineering units, so we weren’t able to install games and benchmark apps on it.

With that, make sure you stay tuned for our review for the full performance tests and benchmarks. Although we already expect it to pose blazing speeds in every task we will run on it. The Exynos 980 on last year’s devices are one of the fastest in the market and we’re expecting nothing less here. Of course, we still have some of the key features that Galaxy devices are known for. For starters, the Samsung Galaxy S20 still has an ultrasonic fingerprint scanner. It does feel fast in our first attempts, but we’ll see how it holds up since, we’ve seen disappointing performance from this technology in other Samsung smartphones before. Wireless PowerShare is also present, so you can charge any wireless charging devices just by placing it on the back of the device. It should work nicely with the new Samsung Galaxy Buds Plus.

The Samsung Galaxy S20 also has faster wireless charging support and comes with a 25W fast charger. And of course, an IP68 certification that can withstand water splashes and dust infiltration. Well, that’s it for now. Again, we’ll have a comprehensive review of the Samsung Galaxy S20 as soon as we spend more time with it. In the meantime, you can check the full specs list and Philippine pricing here.