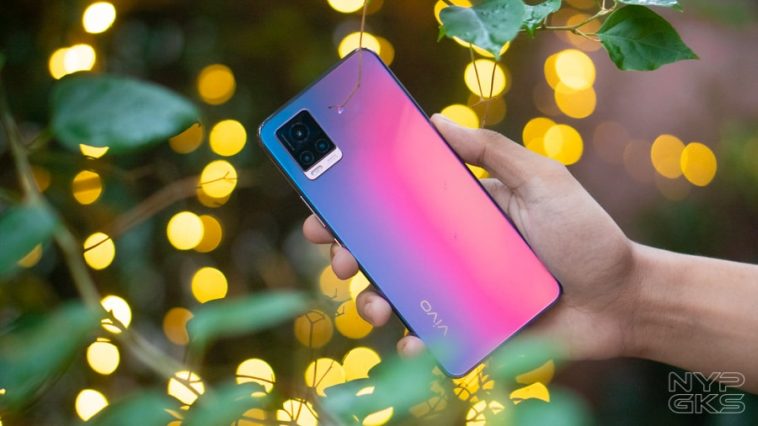 Vivo has brought its V20 series to the Philippines. Today, we’ll be taking a look at the vanilla model, the Vivo V20.

Priced at Php19,999, the V20 is targeted to those who want more from a regular midrange phone. If you’re one of them, is this the phone you should go with? We find out in our Vivo V20 review.

The Vivo V20 and V20 Pro looks and feels very alike. They both have an identical camera layout on the back and similar color options: Midnight Jazz (black), Moonlight Sonata (white), and the one we’re reviewing, the Sunset Melody, which has a much interesting tone with its purple color gradient.

Like the X50 series, both models are also thin and lightweight, making them incredibly comfortable in the hands.

Since both models are very similar, you can tell them apart by looking at the notch and the logo on the back. The V20 has a smaller notch as it only has a single selfie camera, versus the two on the Pro model. The Pro model also has the 5G logo on the back, a feature that’s missing on the V20.

There’s an AG matte glass on the back that gives a high-end look, but still prone to fingerprint marks and smudges. It also has an aluminum chassis that makes it solid in the hands. You can slap the included clear case if you have butterfingers.

Vivo didn’t mention what type of glass they used in the front, but we suspect it’s a Corning Gorilla Glass 3 or higher. It does have a pre-applied screen protector for extra peace of mind.

Taking a tour, we have the 6.44-inch AMOLED screen on the front, which has ultra-thin bezels and a relatively thick chin. It’s a bit odd that Vivo went with a notch instead of the more modern punch-hole on the Vivo V20. But it still looks clean, so we’re not complaining.

You can also spot a wide slit inconspicuously hidden on the top of the display. It’s for the earpiece, which only works on calls and not as the stereo speaker.

On the top, we have the second microphone for noise cancellation on calls. While on the bottom, we have the loudspeaker, the primary mic, 3.5mm headphone jack, and the USB Type-C port.

We have the SIM tray on the top left, which can house two nano SIM cards and a microSD card.

We’re really impressed with the design and build of the Vivo V20. Sure, it looks good, but so is most of its competition. What sets it apart, at least for us, is its sleek profile that’s really nice to hold.

Like most of their midrange phones, the Vivo V20 brags an AMOLED panel, while most of the competition settles for IPS. It’s at 6.44-inches, with a FHD+ 2400 x 1080 pixel resolution and HDR 10 support.

Vivo V20 also has enough sharpness for reading small text, and decent max brightness for outdoor visibility. On the downside, it’s stuck at a 60Hz refresh rate, while competing devices like the OnePlus Nord is already at 90Hz.

The Vivo V20 also lacks a stereo speaker setup. The single bottom-firing speakers has decent clarity but the volume could be louder. For a more immersive experience, you can plug in the included earphones via the 3.5mm port, or check out the Vivo TWS Neo.

The Vivo used a 2.3Ghz Qualcomm Snapdragon 720G octa-core processor for the V20, which is definitely not the most impressive choice for the price. There’s also 8GB of RAM and 128GB of expandable storage, which are the standard inclusions for the price.

During our time with it, the V20 did actually delivered acceptable performance — from social media browsing, taking pictures, and whatnot. We did encounter occasional lags, but barely noticeable.

Gaming performance was also great. We played Call of Duty Mobile, and it ran at high graphics settings and max frame rates with good stability and little to no hiccups. PUBG Mobile also performed well.

It may not have the most impressive processor for the price, but the Vivo V20 did offer decent performance for basic tasks and gaming.

The Vivo V20 is one of the first to run on Android 10-based FunTouch OS 11, offering the next-gen of the Android operating system.

Funtouch OS 11 features a much cleaner and minimalistic design than its predecessor, which was notorious for being bloated and packed with unnecessary features.

Since it has an OLED screen, it would be a shame not to use the Always-On Display feature. You can choose between different clock styles, and it will show up on the screen even when it’s off. It can also show notifications without having to touch the phone.

You can switch the Google News Page to Vivo’s Jovi Home, which shows dynamic tabs like the weather, suggestions, app shortcuts, Digital Wellbeing, and more.

Of course, Ultra game Mode is also present, which offers software-level customizations to tailor the system while you’re gaming.

Probably the only thing that annoyed me is the navigation buttons. I’m used to having the back button on the right and instead on the left. Sadly, there’s no way to customize it in the settings as it only offers you to switch to gesture navigation.

The Vivo V20 shares the same camera to the Pro model. But to differentiate them, it does lack a secondary selfie camera.

Still, we’re getting the same 44-megapixel selfie snapper. While on the back, we have the triple-camera setup consisting of a 64-megapixel f/1.8 main shooter, an 8-megapixel ultra-wide that doubles as a macro lens, and of course, the depth sensor. Sadly, there’s no OIS.

The overall camera quality is great. The colors are pretty accurate, with no oversaturation to artificially spice up the image. The contrast is also nice and the dynamic range is clean.

Low-light and indoor images are also clean. If you want to add exposure, you can enable the Night mode for a long-exposure shot. The images will be brighter, albeit the dark areas will get really noisy.

The 44-megapixel selfie camera takes unsurprisingly sharp images with natural skin tones. I like how the camera app automatically knows that I’m in a dark room so it automatically enables the screen fill light to make the image brighter.

Of course, you can also play with tons of Face Beauty features. Clearly, you can never take a bad selfie on this thing.

All in all, the cameras on the Vivo V20 is clearly its biggest asset. If you’re into mobile photography, the quality and flexibility are enjoyable to play with.

Besides its processor, the main feature you’d be sacrificing when you go with the vanilla Vivo V20 instead of the V20 Pro is the 5G connectivity. But unless your area already has 5G coverage, this shouldn’t matter much.

Chances are, it will take months or even years until your location gets 5G signal. By then, newer 5G-enabled phones will arrive, so you may want to look at those instead in the feature. For now, settling with a 4G phone is a more practical idea.

Other than that, the connectivity features on the Vivo V20 did perform well during our tests, no issues here. It has fast dual-band WiFi, 4G LTE, Bluetooth 5.1, and USB Type-C. The call quality is also satisfactory.

After a loop of synthetic workload on PCMark, it was able to last for 12 hours and 23 minutes of screen-on time. This translates to a whole day of light to moderate use, with a couple of juice left to play with when you get home from work.

Other than its impressive battery, the Vivo V20 also comes with a 33W fast charger. A full charge will only take about an hour.

There’s no denying that the Vivo V20 is a flashy smartphone. It has an eye-catching paint job and a sleek design. It also has modern and ideal daily-driver features like a vibrant display, great cameras, long battery life with fast charging, a reliable processor, and a much-improved interface.

However, there’s no denying that there are a couple of similarly-priced alternatives out there that offers a much better processor and a high refresh rate screen. These are the main components that most people are looking for in a modern smartphone.

Vivo V20 pricing and availability in the Philippines