Only a few months have passed since it was last updated, but WeChat has once again released a new version for the iOS and Android platforms. At version 5.1, this popular messaging app introduces sticker previews and larger group chats. Best of all, the app launches its first batch of WeChat Games.

Positioned in the limelight among all currently available WeChat Games is the Craz3 Match. Its gameplay is quite similar to Candy Crush Saga, though you’ll be switching and matching cute animals instead. Despite belonging to an overcrowded game genre, Craz3 Match comes with unique features and mechanics that make it effectively fresh and original.

As a social game within WeChat, Craz3 Match allows you to invite your friends (and other players nearby your location) in challenges. Brag your gaming prowess by getting the best score within the given time. Helping you achieve such goal are different items, all of which can ultimately boost your score on each attempt. If friendly competition isn’t your thing, you can also test your skills against bosses in the stage mode. Because one puzzler isn’t enough, WeChat also has another exclusive game for its fans—2Day’s Match. The rules are straightforward (and won’t diminish the fun factor): match 2 tiles to clear them and try matching pairs as many as you can within the time period. Finally, bringing up the rear is the simple arcade game called Pencil Pilot. Here you control a sketch of a plane firing artillery at incoming waves of enemy planes. Destroy them, avoid collision, and you’ll be reaching the top rank in good time.

All in all, these games are meant for casual play. So, while waiting for your WeChat contacts to reply to your messages, have a go at them and aim for the top scores. They’re certainly addictive and fun. Even the cutesy art and music direction should already win you over. 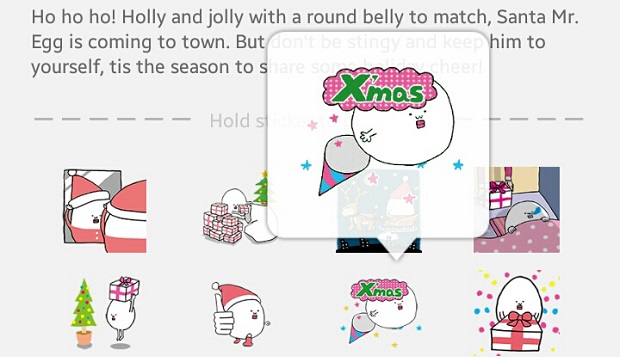 Though they’re dependent on WeChat for retrieve user credentials, note that Craz3 Match and 2Day’s Match are separate apps that must be downloaded first (links below) before you can start playing them. As mentioned above, version 5.1 also brings sticker previews. While browsing in the in-app shop (first introduced in v5.0), simply tap and hold on an individual sticker within a sticker pack to preview its animation. This new feature should allow you to decide if a sticker pack is worth buying or not. Last but not least, group chats can now accommodate up to 100 members.